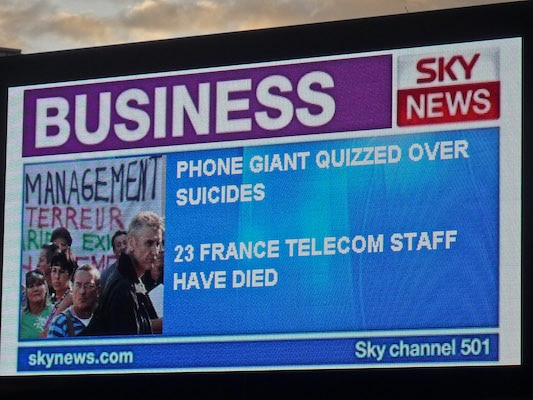 The French courts recently found the telecommunications firm Orange/France Telecom and its top managers guilty of “moral harassment” connected to a wave of worker suicides a decade ago. The former management team, including the former CEO, face jail time and fines, while the company was ordered to pay 3 million euros in damages to the victims.

This ruling could set a legal precedent in a country that has experienced high suicide rates, often connected to radical restructuring and “management-by-stress.” At the French police, suicides were recently reported to outnumber deaths in the line of duty. In 2012, Renault was found guilty of gross negligence relating to three suicides from the mid-2000s. The postal service company La Poste was accused of responsibility for 50 worker suicides in 2016, connected to an aggressive restructuring plan launched in 2014.

In this crowded field, the “social crisis” at France Telecom stands out for having attracted over a decade of attention in the media and now a landmark court ruling. The term “Syndrome France Telecom” has come to be short-hand in France for worker stress and suicides. In a recent article, my co-authors and I argue that France Telecom’s labor unions deserve much of the credit. The unions organized creative initiatives that led to radical and far-reaching changes in both management and government policy. These succeeded because they mobilized workers around a consistent message and then communicated that message to the public: workers’ physical and mental health should be valued above shareholder returns. The U.S. labor movement can draw inspiration from their experience on how to hold companies responsible for the well-being of their workforce.

Anatomy of a social crisis

The worker suicides at France Telecom occurred in the wake of a major 3-year restructuring plan. Then-CEO Didier Lombard launched the NExT (New Experience of Telecommunications) plan in 2006, which called for downsizing 22,000 employees and encouraging 14,000 job changes. Workers had to change their jobs every three years under a policy called “Time to Move.” Managers were given special training on how to meet draconian objectives for cutting workers on their teams, often based on ethically questionable methods. Workers were often required to relocate on short notice, to force them into retirement or to quit their jobs.

France Telecom’s unions opposed the NExT plan from the beginning, but they had trouble convincing management to change course. Like other large French companies, France Telecom’s workers are members of several different unions, from the leftist CGT and SUD-PTT to the more reformist CFDT and CFE-CGC. These unions jointly negotiate collective agreements with employers’ organizations representing the telecommunications industry and with France Telecom management. Their members also sit on multiple labor-management committees that consult on health and safety and other workplace issues. Union representatives saw the human costs of draconian restructuring in their departments and units. But they disagreed on strategies and tactics to challenge these policies.

In 2007, two coalitions of unions launched different initiatives to study and publicize the negative impact of restructuring on France Telecom’s workers. SUD-PTT and CFE-CGC established the Observatory of Stress and Forced Mobility, organized around a small scientific committee of researchers, practitioners, and consultants and around 20 union activists. The Observatory carried out and commissioned a series of studies, including a survey answered by more than 3000 employees. Their findings showing high rates of stress were widely publicized through France Telecom’s workplace committees. The Observatory’s annual meetings were attended by hundreds of worker representatives as well as by journalists and employees from other large companies–fueling discussion of the causes and consequences of worker burnout both within and beyond France Telecom.

SUD-PTT also worked with the CGT to commission a play by the theater company NAJE (Nous n’Abandonnerons Jamais l’Espoir). NAJE performs in the tradition of ‘theater of the oppressed’, encouraging audiences to participate in changing the course of exploitative situations they have experienced. The play’s directors read company documents and interviewed workers to develop the script. NAJE then performed the play at union and worker meetings–including at the Observatory–and distributed DVDs across the company.

These initiatives helped to develop and disseminate a coherent critique of the NExT restructuring plan across France Telecom’s workers and unions. The unions framed this critique in terms of the company’s failure to value its workers’ health and well-being as part of its broader responsibilities to the workforce and society. The culprit was management’s excessive focus on shareholder value.

A CGC union representative involved in the Observatory explained: “we focused on two things: the organization of work and the suffering at work on the one hand, and the strategy of the company and the financial strategy on the other. And it is on these two aspects that we tried to focus our action. [….] we said: the staff is in a difficult situation, and the real cause is the absence of strategy and the financial conditions that make us always distribute more dividends.” (FT CGC representative, 1/7/10)

Communicating with the public

When the press started to report on the high rate of suicides at France Telecom in 2009, the unions were ready with a well-organized message and plan of action for communicating it. Worker stress was unequivocally due to management’s draconian approach to restructuring. This message was backed by data from the Observatory. It was dramatized through a series of protest actions among an already-mobilized workforce, who had seen their own private dramas played out through NAJE’s theater performances.

Top management countered that suicides were a private matter, and that the suicide rate was not unusual for a large French company. In one controversial statement, Didier Lombard derided the “fashion for suicides” among the workforce–bringing widespread condemnation from the unions and the public. But France Telecom’s top management team was quickly forced to backtrack and acknowledge some responsibility, under pressure from the French government. The deputy CEO resigned, and France Telecom opened negotiations with the unions on a series of social accords in September 2009. These ended forced worker mobility, set up a process for surveying employees every 2-3 years on stress, and put in place policies to improve working time and work life balance. In one fell swoop, a company that had largely marginalized worker voice embraced it. As a result, unions gained a formal role in monitoring management practices to make sure they did not threaten workers’ “psychosocial” health–a term that encompasses mental health and well-being.

These developments also had wide-ranging impacts in France. In the wake of the suicides, the French government put in place a national collective agreement on harassment and violence at work. This legally required employers to evaluate psychosocial risks, and has empowered unions and worker representatives at other companies to consult on these issues.

The French court’s recent decision on the France Telecom case is likely to amplify this impact, further shifting expectations concerning how management should balance its responsibilities to shareholders and workers. This court case and its outcome also owes much to France Telecom’s unions, which, led by SUD-PTT, filed the initial complaint to the Paris prosecutor’s office in 2009. Management’s excessive focus on shareholder value to the detriment of worker well-being again was a central theme in the media and public debates on the causes of the suicides during the criminal trial of France Telecom management. A song titled ‘Le Blues des Telecom’ was released in May 2019, with the refrain: ‘Louis-Pierre Wenes [former Deputy CEO] sounds the end of the recess as/ the shareholders demand to maximize returns/ when desperate employees kill themselves’.

The unions saw the court case as an extension of the work they had been doing to study and publicize management’s neglect of its responsibilities to worker health over many years. In an interview in 2010, a SUD-PTT representative explained: “it seems to us complementary to the creation of a balance of power in favor of employees to use the law through judges to remind employers of their responsibilities not only to the stock market and shareholders but also for the health of employees. That practice is extremely important and relatively new for our union [….]–we are attacking on a theme that was quite innovative, which is the responsibility of employers to the health of workers.” [emphasis added] (SUD representative, 28/06/10)

What are the lessons for U.S. unions?

The high rates of stress experienced by France Telecom’s workers will look familiar to many U.S. workers and their unions. Work-related suicides and suicide attempts are on the rise, with a wave of suicides recently reported at Amazon–a company well-known for its stressful working conditions and aggressive tactics to fight union organizing. I recently worked with the Communication Workers of America (CWA) on a survey of their members in call centers. Many of their employers are companies like France Telecom: telecommunications giants that once offered good, stable jobs, but have been hit by the dual pressures from low cost competition and investors seeking to extract short-term profits. Our survey results showed widespread problems of worker stress and burnout, connected to intensive performance monitoring and fears of job loss through downsizing and outsourcing.

The France Telecom case shows what can be won when unions bring the growing distress and burnout experienced by their members beyond the bargaining table, into the public sphere. U.S. unions are organizing these kinds of campaigns with community and student groups and racial justice organizations around the ‘Bargaining for the Common Good Network’. The CWA’s Bank Workers’ campaign is one example, which has been mobilizing around worker stress in large U.S. banks connected to intense pressure in their collections and sales call centers. The lesson from the social crisis at France Telecom and its aftermath is that union actions have the best chance of swaying the public and policymakers where they link legal and social change to concrete workplace struggles. These campaigns succeed where they convey a simple and consistent message: that employers have a social and legal responsibility to provide their workers with healthy and secure jobs. Put more bluntly: when managers are killing their workers to make short-term profits, they should go to jail.

Virginia Doellgast is an Associate Professor of Comparative Employment Relations in the ILR School at Cornell University.