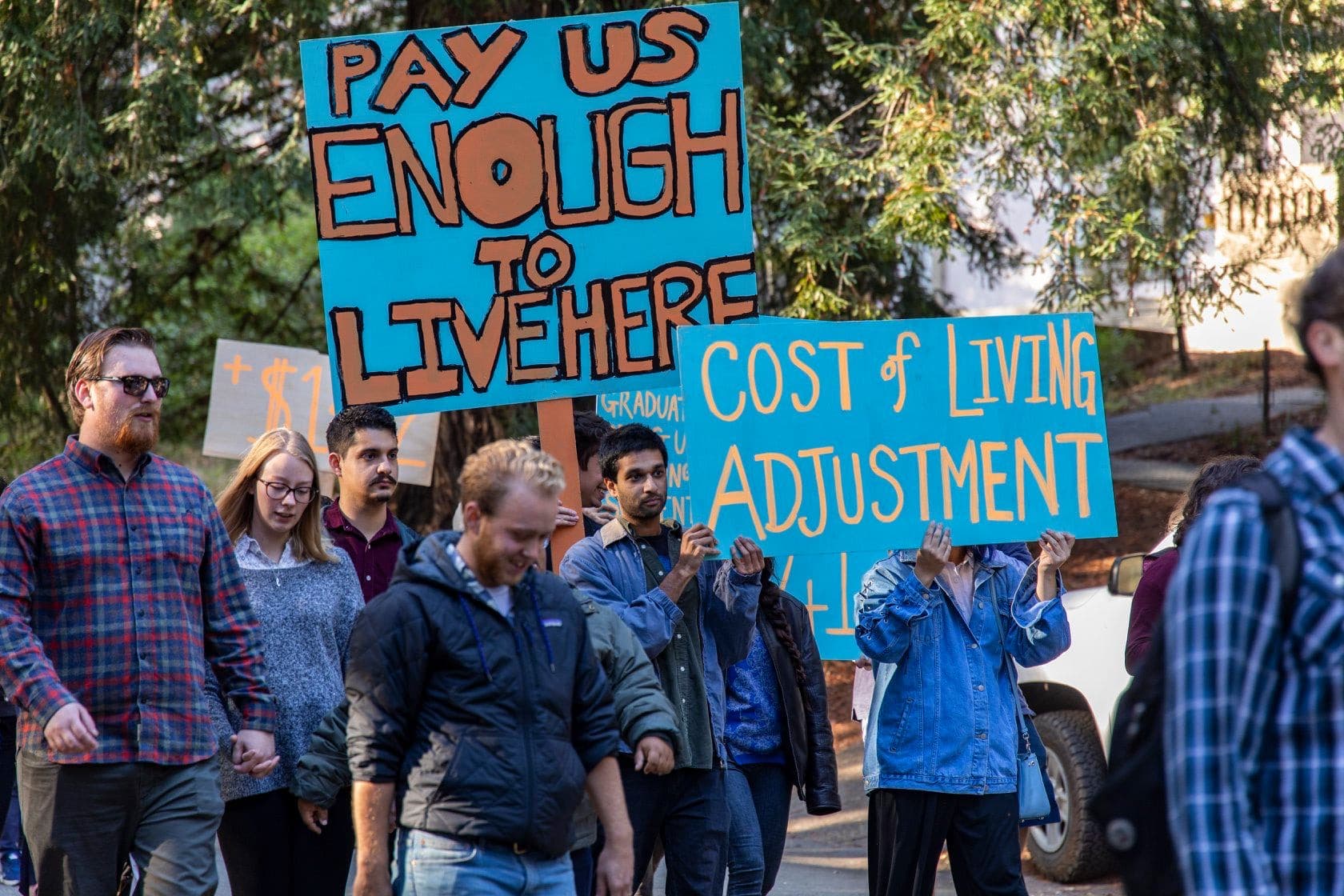 We, the hosts of the Money on the Left podcast, write to express our solidarity with the University of California, Santa Cruz (UCSC) graduate students participating in an ongoing wildcat strike for a Cost of Living Adjustment (COLA). We extend our full support to not only the 82 UCSC graduate students who the UC administration fired on February 28, 2020, but also all the UC graduate students presently fighting for a living wage.

Over the last two weeks, graduate student strikes have spread from Santa Cruz to each UC campus, with the sole exception of UC San Francisco. At issue is the fact that graduate workers in the UC system are sorely underpaid for their teaching and research labor. These low wages have left UC grad workers poor, indebted and, above all, burdened by rents exceeding 50 percent of their monthly paychecks. A simple Cost of Living Adjustment (COLA), the strikers argue, would reduce the rent burden of graduate student workers to 30 percent of their income, enabling them to devote more money toward food, books, and other necessities, while also reducing their dependency on non-dischargeable student loans.

UC administrators not only refused to grant striking graduate workers at Santa Cruz their urgent and entirely reasonable request. They also fired 54 of them while refusing to renew the contracts of 28 others.

Such hostility and indifference toward the suffering of graduate workers is, unfortunately, widespread in the US higher education system. This is why the UC COLA strikes—which represent a serious challenge to the neoliberal higher education system—are so vital. Each COLA movement speaks to particular institutional contexts and housing crises. Yet, together, they provide a model for how workers from different campuses and different disciplines can unite as one movement fighting for a just and equitable system that rejects the austerity and corporatism now rampant in public education.

For us, UC graduate workers’ protests against their own impoverished conditions also speaks to the urgency of the movement for Modern Monetary Theory (MMT), which aims to repudiate the zero-sum logics that structure nearly all contemporary political debates and struggles. For decades, officials and administrators have variously misrepresented and privatized the power of the public purse. Appealing to false narratives about monetary scarcity, they position the public as revenue-constrained and the white middle class taxpayer as the finite source of government finance.  As a result, demands for democratic and dignified living and working conditions—like those of the UC grad workers—are routinely dismissed as incredulous.

The MMT movement, by contrast, labors to bring the era of “how are you going to pay for it?” to a close. Money is an inexhaustible public utility, insists MMT. From the federal to state and municipal levels, money can and should be made available as needed to ensure full employment, job security, living wages and rights to dignified and affordable housing, as well as an ecologically robust and sustainable planet. In sum, MMT clarifies that public academic workers can have COLA—and a whole lot more.

The UC COLA strikers have already succeeded in drawing widespread attention to their movement. We hope that they win their demands and that their success serves as catalyst for broader transformations in higher education and beyond.

Maxximilian Seijo, one of the co-hosts of Money on the Left and coauthors of this statement, is currently on a wildcat strike in his capacity as a PhD Student in Comparative Literature at the University of California, Santa Barbara (UCSB).

Richard Farrell, Money on the Left’s transcriber, is also currently on a wildcat strike in his capacity as a PhD Student in Film & Media Studies  at the University of California, Santa Barbara (UCSB).