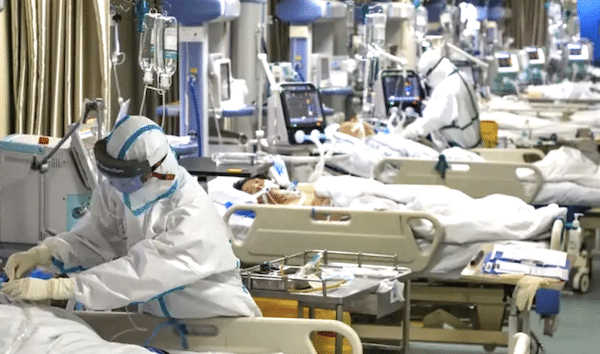 In October 2016 the UK government ran a national pandemic flu exercise. It was codenamed Exercise Cygnus. The report of its findings was not made publicly available, as part of the general antipathy towards the NHS in general by the Conservative party. But the then chief medical officer Sally Davies commented on what she had learnt from it in December 2016. The public will now pay with their lives for deliberate government inaction and total disregard towards their primary function–to protect us all.

You can read the–“Emergency Preparedness, Resilience and Response (EPRR)” document HERE–“that participated in Exercise Cygnus, a three-day exercise looking at the impact of a pandemic influenza outbreak, and the significant impacts on health delivery a widespread pandemic in the UK would trigger.”

“We’ve just had in the UK a three-day exercise on flu, on a pandemic that killed a lot of people,” Sally Davis told the World Innovation Summit for Health at the time. “It became clear that we could not cope with the excess bodies,” she ominously warned. One very predictive conclusion was that Britain, as Davies rightly said, faced the real threat of totally “inadequate ventilation” in a future pandemic. Davies was, of course, referring to the need for ventilation machines, which keep oxygen pumping in patients critically ill with a respiratory disease such as coronavirus.

Despite the severe failings exposed by Exercise Cygnus, the government’s planning for a future pandemic did not change after December 2016. The government’s roadmap for how to respond to a coronavirus-like pandemic has long been available online, and the three key documents–the 70-page “Influenza Pandemic Preparedness Strategy”, 78-page “Health and Social Care Influenza Pandemic Preparedness and Response” and 88-page“Pandemic Influenza Response Plan”–were published in 2011, 2012 and 2014 respectively.  What is striking about this exercise and subsequent published plans was that these plans were properly tested and emphatically failed, yet these documents were not rewritten or revised and provided no new preparedness recommendations towards what would happen in the event of another virus outbreak, which was expected in due course. Except for one thing. That the health services would not be able to cope.

All these documents and plans share a common failure–not one of them mentions ventilators. In typical warcry theatre for the purposes of rallying the troops, as it were, Matt Hancock, the Health Secretary, told British manufacturers on 14 March, “If you produce a ventilator, we will buy it. No number is too high.” It’s as if they read Davies comments only last week, thought they might get caught and reacted to stave off yet more criticism of their casual handling of the state.

The result is that the government has no stockpile of ventilators at all. All three of the plans refer to stockpiles, but only of antivirals, antibiotics and personal protective equipment for NHS staff. As for the latter, many NHS frontline staff from ambulance crews, to porters and medics are already complaining they have run out and facing being ‘cannon fodder’ in these warlike hospital circumstances that Hancock now realises will become a reality.

Hancock’s pleas come six weeks after the first cases were reported in Britain and two months after an epidemic was called in China.

As the 2011 preparedness strategy puts it, “Critical care services are likely to see increases in demand during even a mild influenza pandemic. In a moderate or severe influenza pandemic demand may outstrip supply, even when capacity is maximised… it may become necessary to make decisions concerning the priority of access to some services.”

And yet, the government failed to heed any of the warnings, the strategy or plans put forward. In this, the government has failed in its primary duty–to ensure citizens are safe.

Downing Street officials have, according to the Sunday Times on 15 March, found their planning efforts to be quite literally non-existent. Even with pre-existing pandemic plans, an official is quoted as saying they, “never went into the operational detail”.

The government devised an atrocious plan of not tracing, tracking and isolating the infected to flatten the curve–but to simply to control the infections and ensure everyone got it for what they termed ‘herd-immunity’ and leave everyone to cope, including the NHS. The death toll was modelled in these circumstances by Imperial College and its findings were so bad–it even caused the Trump administration to U-turn, let alone Boris Johnson’s defective team to take notice.

Assumptions laid out in 2018 by the Scientific Pandemic Influenza Group on Modelling, or SPI-M–a working group of 10 academic teams–predicted that 4 per cent of cases will require hospitalisation;  this is in line with estimates for Covid-19 at around 5 per cent, the disease that is caused by the virus Sars-Cov-2, both commonly referred to as coronavirus.

SPI-M’s modelling also assumes that a quarter of those hospitalised will need a ventilator; this, too, aligns with the World Health Organisation’s findings on coronavirus in China, and at the moment is even proving to be an under-estimate.

In short, at least 1 per cent of all cases can be expected to need ventilation or between 400,000 and 530,000 people. Modelling released on March 16 by the same team at Imperial College, which has informed government planning, suggests a 1.3 per cent rate. However, that rate has since risen in Italy.

New modelling and older data, in line with predictions made in previous studies based on coronavirus pandemics all corroborate and say the same thing. Quite why Boris Johnson’s government decided to steer away from their own highly detailed predictive reports prepared by the best experts and away from all the evidence and international advice is a mystery.

The modelling by SPI-M in 2018, (which is even available online) uses data that goes as far back as the 1957 influenza pandemic in the UK. It is regarded as the best data for predicting the outcome of a pandemic in Britain. This model states that during the peak, which is now expected to arrive in Britain in late May or June, 15 to 20 per cent of all coronavirus cases will hit the NHS every week for three weeks. Assuming only a 1 per cent rate, rather than the higher rate in Imperial’s latest modelling, the number of patients needing a ventilator would, therefore, range from 60,000 per week to more than 100,000. Each ventilator needs to be used for an average of 10 days.

The United Kingdom has 5,000 ventilators.