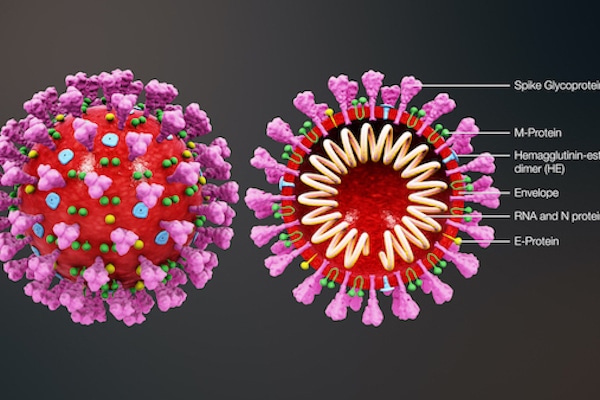 Understandably, these days we hear a lot about the symptoms of Covid-19 (dry cough, high fever, etc.). Conversely, there is much less discussion of the virus as a symptom. Let’s say then that to intervene on the symptoms of the virus it is necessary not only to have specific scientific knowledge, but also to put in place a serious reflection on the structural causes of its global spread and, with them, the possibilities of change that the emergency opens up for us, at least theoretically. If mainstream information focuses on the management of the epidemic, reflecting on its causes could lead to a series of far from irrelevant considerations.

The most accepted hypothesis is that, although it cannot be said precisely where and in what circumstances, the gestation of Covid-19 took place in connection with invasive agro-industrial production processes. As pointed out by evolutionary biologist Rob Wallace,(1) coronaviruses such as MERS and SARS, together with similar pathogens like Ebola, originate from an increasingly aggressive agro-economic industry, which devastates entire ecosystems by placing in close and explosive proximity animals deprived of their habitat, intensive livestock breeding, and urban suburbs with high population density and poor sanitation. In technical terms, these are zoonotic diseases—that is, diseases transmitted directly or indirectly from animals to humans. It is not accidental that many of these viruses are named after animals, such as ‘bird flu’, ‘swine flu’ and so-called arboviruses (transmitted by arthropods, generally ticks or mosquitoes, including the ‘Zika virus’). In all these cases, we are faced with the repetition of the same pattern: the spillover of the infectious viral strain from the animal to the human within an ecological context shocked by the expansion of another virus, that of exasperated economic productivism.

This is the point. The ferociously opportunistic logic of the multinationals, particularly in the field of agribusiness, has been pushing for some time to conquer the earth’s last ‘virgin’ territories, particularly through deforestation projects that force various animal species to interact with previously isolated viral strains. These viral strains are then transmitted to humans not only directly (as with the notorious ‘wildlife markets’) but also through the mediation of other animals (for example, in transgenic monoculture intensive farms where the weakening of the animal’s immune system creates ideal conditions for viral proliferation). Ecological devastation therefore facilitates the interaction between pathogens previously kept at a distance by ecosystems with complex biodiversity, and human communities on the margins of perishable ecosystems. The pathogenic elements emerge from remote territories, affect urban suburbs and start travelling quickly along the routes forged by globalization.

As Wallace wrote in his 2016 book Big Farms Make Big Flu, “One of these bugs, or an as yet undiscovered cousin, will likely kill a few hundred million of us someday soon. It isn’t if, […] it’s when”.(2) Take Ebola, which recently spread both in West Africa (2013-16) and in the Democratic Republic of the Congo (since 2018), but was already recorded in Sudan and Central Africa in 1976. The aetiology of this contagion presents very similar characteristics to those described above: following wild deforestation financed by foreign capital (such as the ‘Farm Land of Guinea Limited’, a British company based in Nevada) a viral transmission is triggered, which starts from healthy carriers (e.g. bats), crosses other animal species that are decimated in the process, and ends up infecting vast suburban and urban communities. Yet, the thousands of deaths from Ebola, combined with the horrific side effects of the infection, have remained largely confined to the African continent, and this is no doubt part of why they cause less sensation than Covid-19.

We must therefore reflect on the root causes of a virus that has suddenly risen to global celebrity status. The frequency of subtle (i.e. capable of sudden mutations) and highly infectious epidemiological phenomena arises from the productive virulence that animates the increasingly fierce agro-industrial competition. If we look at the history of capitalism, we can observe how these zoonotic pandemics are not new. From the three pandemics that shook England during the first industrial revolution following the importation of cattle from Europe, to the cattle plague that devastated Africa at the end of the 19th century, to the infamous Spanish flu, which killed an estimated 50 to 100 million people between 1918 and 1920—a contagion that most likely started from a pig or poultry farm in Kansas. Covid-19, however, is the latest in a series of viral infections that have marked globalisation’s development over the past 20 years.

Here, however, we should clarify that by ‘globalization’ we mean not only the circulation of goods, people and capital, but above all—in the deepest meaning of the term—the extension of the capitalist mode of production throughout the entire globe, where value does not grow on trees before being exchanged, but is created by living labour. Discussing the mode of production in today’s emergency context may seem inappropriate. On the contrary, I claim it is absolutely necessary, since this concept alone allows us to grasp the essence of the modern condition (which we would now call post- or hyper-modern). In the first place of my personal hit parade of things to save in Marx there is no doubt his critique of value as produced by the dialectic of capital and work, the social narrative that has defined modernity up to the present day. Our compulsive mode of production is based on this specific model of social organization, which gives birth to an enigmatic and intangible entity, surplus-value, which in turn morphs into the concrete money-form we call profit, thus establishing the work-society as our one-and-only ‘lifestyle’. When we refer to our lifestyle being threatened by the virus, then, we always speak of the valorized substance of this form of life, which emerges from the correlation of capital and work, two categories that are deeply attracted to one another precisely because their relationship is conflictual. What is at stake here is a social bond, which as such not only creates economic value (wealth and poverty), but simultaneously guarantees the reproduction of our societies, and therefore of our culture, of all those other values which still (arguably) keep us together.

At this point, the obvious (rhetorical) question emerges spontaneously: what is the virus that currently threatens our lifestyle, if not the last symptom, in chronological terms, of the epochal crisis of a reproductive relationship that is now terminally ill? The virus that today paralyzes entire societies considered affluent, forcing them into a permanent state of emergency and mere survival (feeding, caring, sleeping, staying at home, etc.), is sending us a clear and disturbing message, if only we choose to understand it: this apocalyptic scenario without redemption in sight is not only our present, but awaits us as the future of a world perversely delivered into the hands of a reproductive mechanism that, however ingenious, has been running out of steam for some decades now, and is increasingly short of socio-ontological fuel. We must not make the mistake of separating Covid-19 from the social relation from which it was born and that feeds it. If we do, there will be no alternative to the catastrophic naturalisation of social Darwinism 24/7, the struggle for survival among those united merely by being expendable (as with Agamben’s figure of homo sacer) against the increasingly fewer and more powerful holders of capital. In fact, are we not already knee-deep in an intrinsically eugenic logic that envisages the sacrifice of those of us considered an economic burden for our societies and their neglected health systems? The recent words of British Prime Minister Boris Johnson on the inevitable disappearance of a large number of elderly people in the face of the emergence of the coronavirus, which “must run its course”, project us precisely into this atrocious dimension of natural selection, justified and even planned by the state. It is therefore essential to place Covid-19 within a close genealogical relation with a series of events that have been functioning as symptoms for some time now: from the ecological crisis, as pressing in its humanitarian emergencies as stubbornly denied by global politics, to the valorisation crisis of contemporary capitalism, the most recent result of which was the ‘great recession’ triggered by the bursting of the housing bubble in 2007-08, and partially overcome only thanks to the huge injection of public resources, which are now no longer there.

If the ecological emergency, together with the microbiological one, represents the external limit of our mode of production, the crisis of valorisation—which originates in technological automation processes triggered by the third industrial revolution (microelectronics), and which therefore increasingly consigns the economy to the sleights of hand of the finance industry—represents its internal limit. We are talking about the same absolute limit to the production of surplus-value. This limit is channelled into and disguised by different emergency narratives to be managed politically through the tools of capitalist ideology, which (as is well known) produces external enemies on an industrial scale to prevent us from seeing the enemy that dwells much closer to home. It is no coincidence that the frequency of mass microbiological (panic) attacks is growing exponentially within the context of an epochal economic stagnation which is the prelude to the implosion of our mode of social reproduction. The fourth industrial revolution at the door—that of artificial intelligence—will only exacerbate the systemic crisis of a dialectical relationship now reduced to the bone of its own contradiction: the production of wealth through that increasingly rare commodity called wage work (the ‘variable capital’ of which Marx wrote). The more swiftly socially necessary work is eliminated, without the possibility of being reabsorbed, the more our global capitalist society condemns itself not only to quarantine, but, slowly, also to extinction, and in the short term to barbarism.

Under these conditions, it is only normal that we are concerned about the health of the financial markets, now almost completely ‘emancipated’ from the real economy. In any case, it seems clear that an absolute limit to capitalist expansion is being reached, beyond which there are no economic miracles awaiting us (no ‘Green New Deal’ or other pious illusions) but a future of increasingly apocalyptic scenarios. All this can be summed up with one of Jacques Lacan’s most significant mottos: “the Big Other does not exist” (il n’y a pas de Grand Autre). Translated for our daily use at the time of global mass contagion, this maxim means: capitalism (i.e. its blind, anonymous and brutally compulsive production dynamic) is running out of rabbits to pull out of its hat when confronted by the crises—or viruses—it generates. In the Preface to his Philosophy of Right, Hegel wrote that the task of philosophy is to reveal “a form of life grown old”,(3) which as such has exhausted its historical possibilities. We should now give priority to this philosophical mission. We lack the ground under our feet, the presupposition of our actions is vanishing, the mediation that has socialized us for centuries falters. In other words, we are at dusk, and the owl of Minerva must prepare to take flight. If we must stay indoors, sentenced as we are to a bizarre state of house arrest, we should at least take the opportunity to reflect on what is causing this state of emergency, and what comes next.