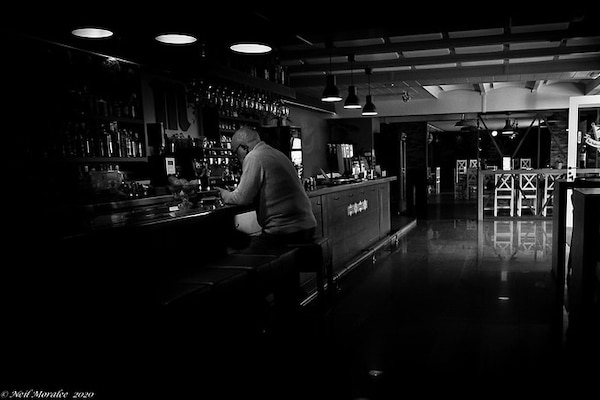 “The Quiet Man” He is not one who does yearn for renown And he never will be the toast of the town The quiet achiever in his own quiet way Of himself he never has much for to say. Poem “The Quiet Man” by Francis Duggan. (Photo: Neil Moralee) www.poemhunter.com/poem/the-quiet-man-3/

I’m in a small city in Catalonia called Olot, not far from the Pyrenees. I came here because I knew the coronavirus lockdown would be much rougher in Barcelona. Still, people walk around with masks and keep social distances, barely going out. There are three of us in a two-bedroom apartment. We read the news with a sort of automatic horror and try–using social networks and videochats–to keep our social contacts, our work, and even our militancy going. It’s an uphill path, and we are surely slipping.

The horror one feels is not only at the number of deaths and infections but also at the authoritarian measures taken by the Spanish government, which has mobilized police and army to confine people to their homes while letting economic compulsion drive large numbers to work in unnecessary sectors of the economy–even in factories with proven cases of coronavirus. Autonomous regions are being stripped of their powers and democratic rights. Then there are the economic rescue measures that defend big capital, leaving poor people and workers in the lurch, especially the most precarious ones.

More generally, I find the whole global situation highly disarming and barely know what to think. Without a doubt, you can see a basic thesis of social reproduction theory confirmed in this crisis: the contradiction between capital and life, between “productive” work and the work of social reproduction. SRT has long worked this angle. And even if it is hard to define the precise nature of the contradiction, it is nevertheless clear as day that those who defend the “economy” and those who defend life are pulling in opposite directions these days.

I think one key question is to determine what kind of crisis this is: a crisis of capital or a health crisis and an environmental one? Obviously, it is a bit of all three. But to say that is not to say much. The real question is the structural relation between the three elements. You could say, as Eric Toussaint has claimed, that the coronavirus pandemic merely triggered an economic crisis that was already imminent. Yet I think the more interesting issue is that–quite possibly for the first time–we are experiencing an economic crisis that clearly has an environmental dimension.

It’s become commonplace to say that a new world order will emerge out of the crisis. But that is a terrible thing to say, not only because it is emerging right now but more importantly because it naturalizes that order. The character of the new world will be decided by struggle. Perhaps some ecological dimension will be brought in, and then the key question is whether it will be eco-fascist or eco-democratic. The latter, obviously, is the only meaningful way to have an ecological, sustainable society.

The most important word in the last paragraph is “struggle” and the most important problem in the world right now is the shortage of it. The left has been weak for a long time, but even so it seems surprisingly paralyzed by the current situation. Outside of my home in Barcelona people were blocking the Avenida Meridiana for more than 150 days to protest for Catalan political prisoners. Now they’ve gone home with little more than a peep. Nevertheless, on a grassroots level, people are organizing networks of mutual support and workers have resisted the compulsion to work in factories, most notably in the Basque country

The vast majority is just trying to be good citizens. Me too. One’s desire for self-preservation may be limited but even so, there is the question of other people–who are not always the hell that Sartre said they were–and especially health workers among whom I count many friends here. They are heroic. At the same time, if the left had a strategy that would leave the world better off and that meant massive protests and actions that caused significant casualties, it would be the right thing to do. (I think that is one thing General Giap taught us.)

The problem is that we don’t have such a strategy. So, the key task now is to communicate, organize and think. There cannot be enough of these three things going on now. States never roll back authoritarian measures without pressure from below. Today almost all the world’s governments are working to develop a new order that will combine capitalism with measures of untold social control. It will be called green and it will be called healthy. The task for us is to conceive and fight for an order in which–to echo a famous document on the left–the free healthy development of each of us conditions the free healthy development of all.