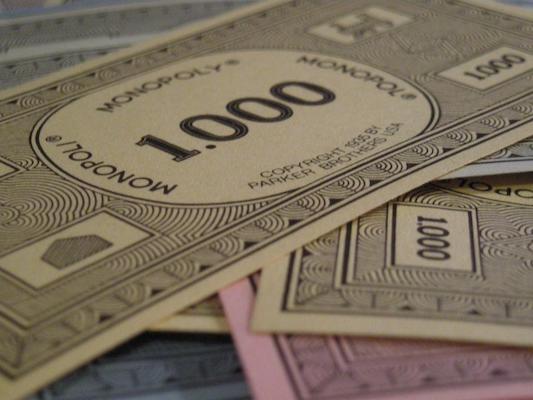 Twelve years ago, banks asked for a bailout after years of irresponsible, highly leveraged lending. The Treasury Department put out a three-page term sheet seeking money from Congress with no strings attached, even eliminating judicial review. Democrats balked, called it a slush fund and worse, then agreed after a few mostly meaningless bits of oversight and some promises to help ordinary people. That $700 billion bailout was window dressing for trillions that came from the Federal Reserve, but it kept Congress quiet, hooking them into the rescue of the system.

Twelve years later, virtually the same course of events is taking place. After just a couple weeks of extreme social distancing measures, the Treasury Department asked for a large bailout, this time of the entire corporate sector. The bill as written initially would have made all bailout activities secret for six months. Democrats balked, called it a slush fund and worse, and then agreed to a few mostly meaningless bits of oversight and some promises to help ordinary people. In fact they’re the same bits of oversight from the 2008 TARP bailout: a five-member oversight panel and an inspector general for the program.

The enormity of this bailout is being under-reported. The number you’re hearing is $500 billion. Of that, $75 billion goes to the airline industry and the mysteriously named “businesses critical to national security.” The other $425 helps capitalize a $4.25 trillion, with a T, leveraged lending facility at the Federal Reserve. The taxpayer dollars would soak up any losses from that lending program. The loans won’t be secret anymore, but the oversight is largely after the fact, without subpoena power, and mainly reduced to writing reports. How exactly do you expect a small, underfunded panel to find fraud in a $4.25 trillion lending facility! Especially when the current administration explicitly believes they are not required to turn over anything to Congress.

So it’s not a $2 trillion bill, it’s closer to $6 trillion, and $4.3 trillion of it comes in the form of a bazooka aimed at CEOs and shareholders, with almost no conditions attached. At the moment nobody’s seen language, but there’s apparently only a buyback ban for the term of the loan. The money cannon can therefore go to executive compensation or mergers or wholesale purchases of distressed businesses or whatever other financial engineering the accounting department can muster. And once the company returns to health, it can leak out cash to investors (and during the loan too, in dividends). There’s no requirement to keep workers hired; in fact, the (necessary) provision to boost unemployment insurance for four months to 100 percent of median salary (including furloughed workers, gig workers and freelancers) means that these companies can fire with relative impunity. Members of Trump’s family can’t get bailout funds, so, yay.

This is a robbery in progress. And it’s not a bailout for the coronavirus. It’s a bailout for twelve years of corporate irresponsibility that made these companies so fragile that a few weeks of disruption would destroy them. The short-termism and lack of capital reserves funneled record profits into a bathtub of cash for investors. That’s who’s being made whole, financiers and the small slice of the public that owns more than a trivial amount of stocks. In fact they’ve already been made whole; yesterday Wall Street got the word that they’d be saved and stocks and bonds went wild. BlackRock, the world’s largest asset manager, is running these bailout programs for the Fed, and could explicitly profit if the Fed buys its funds, which it probably will.

This is a rubber-stamp on an unequal system that has brought terrible hardship to the majority of America. The people get a $1,200 means-tested payment and a little wage insurance for four months. Corporations get a transformative amount of play money to sustain their system and wipe out the competition.

Small businesses get their own program, and can’t participate in the $4.3 trillion bonanza. They get $300 billion, so do the math on who’s supported more. They get forgivable loans if they keep staff on payroll; there’s no such requirements for the corporates. While the Federal Reserve, which can transfer money from the cash cannon with ease, runs the corporate bailout, the hapless Small Business Administration will deal with the small businesses; they have been endlessly criticized for delays on their couple billion in loan guarantee programs, let alone $300 billion. The monopolists get concierge service, the small businesses get to take a number. And the result will almost certainly be massive concentration of power.

There’s also $150 billion for state and local governments and $130 billion for hospitals (though not much for actual equipment, it seems to fix certain existing problems with their businesses).

Progressives I’ve talked to on the Hill are apoplectic. “Temporary survival money for workers, trillions in permanent economic inequality saving a bunch of executives and elites,” said one House Democratic aide. There’s particular anger reserved for the big show made of the House Democratic bill, a sideshow that never was part of the Senate-side negotiation.

“During this moment of unprecedented crisis, who’s valued by Trump’s cruel administration is becoming clearer than ever,” said Maurice BP-Weeks, Co-Executive Director of Action Center on Race and the Economy. That’s true, but it’s also true of the entire political system, not just Trump. “Democratic leaders acceding to a Mnuchin managed slush fund reveal themselves to be too tired and spineless to be entrusted with power,” Jeff Hauser of the Revolving Door Project rightly states.

This bill is an outrageous betrayal, a testament to how power works and saves itself. And Congress is about to put itself on the hook for it. Schumer has the Senate under his thumb, and he praised this bill at 2am this morning, so that’s a done deal. Any House member could deny unanimous consent and stop this, but that would require getting to Washington, forcing everyone else back to Washington in the middle of a pandemic, and delay what is needed (if temporary) relief for everyday people. I doubt anyone will do it. Pelosi purposefully put this in place before turning to remote voting to make such an action toxic.

Democrats will instead whine from the sidelines as money is pushed into the hands of corporate elites. That’s the way they like it: no agency and ineffectual grandstanding. Someday Larry Kudlow will write a book called Firefighting about how he saved the economy in between board meetings of the six companies left in the country. And we’ll wonder how things got so off track. Don’t wonder.

I was on the BradCast with Brad Friedman talking about various coronavirus-related issues. You can hear that at this link.

I will be on The Attitude with Arnie Arnesen today, also on the topic of the moment. Tune in to WNHN 94.7 in Concord, NH at noon ET, or it’ll eventually pop up here.

I got so many emails from you I combined them into a story that you can find here. I want to hear from you, so send me a message at ddayen-at-prospect-dot-org.

We are doing another virtual event with our friends at the American Economic Liberties Project! Join me, AELP executive director Sarah Miller, AELP fellow Moe Tkacik, and Prospectscribe Alexander Sammon for a discussion of what the bailouts in the aviation sector should look like. Tkacik wrote this excellent term sheet on the looming Boeing bailout, and Alex’ piece on the airlines was one of our most-read items this month. It’s a Zoom event happening this Thursday, March 26, at noon ET. You can RSVP at this link.

No doubt after yesterday’s Unsanitized laced into the lack of wartime mobilization and central planning to deal with the rapidly moving outbreak in the U.S., the Federal Emergency Management Agency actually used the Defense Production Act to secure 60,000 testing kits. Well, they used it for about 8 hours; later on the agency said they didn’t need to go that route. At least they conserved that whopping $750 million appropriation that they can spend on contracts.

The darkly amusing part of all of this is that this president has used the Defense Production Act once in his term in office, in a letter in June 2017, to “rectify a shortfall in the space industrial base.” That’s right, the same guy who said invoking this law would turn America into Venezuela did once use it to bolster supplies for… the Space Force.