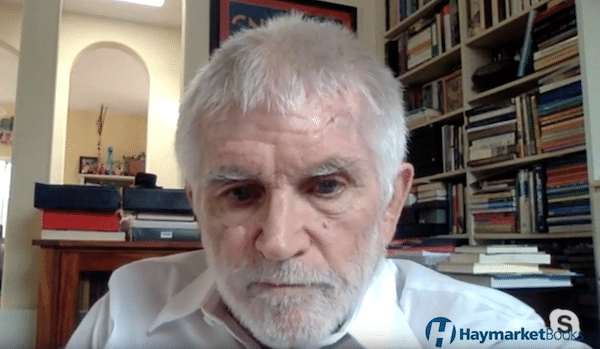 Fifteen years ago, in his prescient book, The Monster At Our Door, Mike Davis warned that a viral catastrophe was being cooked up in the toxic vat built by the combined dangers of global capitalist production, ecological devastation, and the intentional, politically motivated neglect of public services the world over. As coronavirus continues to spread, largely unabated, we are witnessing both profound acts of solidarity among working people, and the grotesque depths to which the ruling class is willing to sink for the sake of maintaining their profits. And these are only the early days of what will likely become a medical Katrina.

The pandemic has shown that capitalist globalization is biologically unsustainable in the absence of a truly international public health infrastructure, and we can say for sure that such an infrastructure will never exist until peoples’ movements break the power of Big Pharma and for-profit health care. Doing so will demand an independent socialist design for human survival well beyond even a Second New Deal. In this virtual teach-in, Mike Davis will offer his appraisal of the crisis so far, discuss the urgent need for international solidarity to end this (and future) pandemics, and take questions from our digital audience.

Mike Davis is the author of Prisoners of the American Dream (1986), City of Quartz (1990), Late Victorian Holocausts (2001), Planet of Slums (2006) and Buda's Wagon: A Brief History of the Car Bomb (2007). Davis is a frequent contributor to left publications such as New Left Review (where his excellent article, "Election 2016," is free access), LINKS, and many others. He is past recipient of a MacArthur Fellowship and the Lannan Literary Award. He lives in San Diego.
View all posts by Mike Davis →

Engels on nature and humanity
Letter from President Maduro as U.S. threatens Venezuela with war