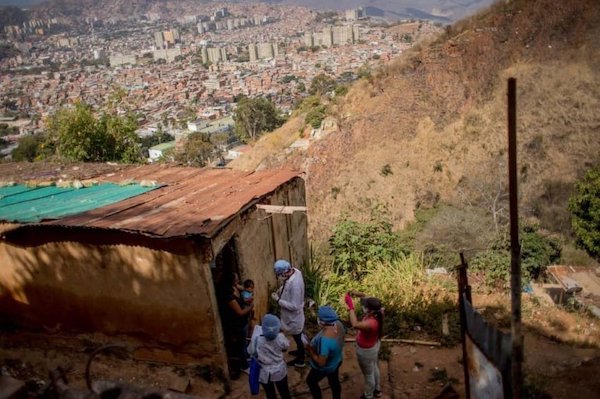 Venezuela has been under a nationwide quarantine since mid-March as the government battles to quash the coronavirus before it overwhelms its health system.

In this endeavour, the government of President Nicolas Maduro faces many challenges, not least of which is the state of its embattled health system that has suffered from years of economic sanctions and the return of thousands of Venezuelans from neighbouring countries fleeing the horrors the pandemic has inflicted in the region.

While, by April 9, Brazil to its east had registered more than 16,000 cases and 822 deaths and Colombia to its west, had seen its tally climb above 2000 cases and 54 deaths, Venezuela had only recorded 167 cases and 9 deaths.

Key to this success are the existing community organisations, in particular the communes, that permeate Venezuelan society. To get a sense of how the communes are coping with the pandemic, Green Left’s Federico Fuentes spoke to Gsus Garcia, a spokesperson for the Altos de Lidice Commune.

First, can you give us an idea of what the Alto de Lidice Commune is?

Our commune, one of several thousand in the country, is a small commune. It encompasses about 5000 people, 2000 families, and is located high up in the mountains, in the north-west of Caracas, in a barrio called Altos de Lidice. A commune is like a small government, a community-based government that exists within a defined area.

In June, the commune will turn two. Since its establishment we have elected a communal parliament, which is the legislative and executive power of the commune. The commune has its own communal bank, seven communal councils and different working groups that operate essentially like mini-ministries: there is one for health, one for food, one for services, one for education, etc.

Despite being young, the commune already has a number of projects up and running, such as our communal pharmacy through which we provide medicines to the community. The pharmacy is the result of international solidarity in that organisations from various parts of the world send us the medicines we need, which in many cases are too expensive or we can’t get due to the blockade, and we provide them to the community.

We also have an urban agriculture project and our own little textile factory, where we produce and run workshops for the community.

We have a dining hall where we provide meals for the most needy, we have a project to provide childcare for those that need it, and a brigade that cleans the streets and carries out public works, such as fixing pot holes, etc. All of this occurs under the principle of self-management. And the projects are largely funded by the community who make a financial contribution to the commune every month.

Ours is a commune that emerged among adversity, in the hardest times of the Bolivarian Revolution, during which we’ve had to face a blockade, the collapse in oil prices, where a lot of our nation’s wealth that was held in international banks has been stolen, where inflation has been brutal and the economic attacks intense.

It’s been very difficult, but despite all these problems we have not stopped. Every day we are doing something, inventing something, thinking about how we can promote self-management, self-government in the community.

How is the commune dealing with the threat of COVID-19?

Given the level of organisation that the commune has achieved to date, we are better prepared for this situation, more so when you consider everything we have had to deal with in the past three or four years of constant foreign aggression and economic sanctions.

We are better prepared, psychologically and organisationally, to confront any situation that might arise, including COVID-19.

Of course, it has not been easy, but we have faced so many problems, had so many struggles; we have already had to deal with ensuring the distribution of services and food, but this means the commune already has existing mechanisms to deal with everyday issues and any emergency that might arise. We have grassroots structures that allow us to organise to deal with any situation.

For example, we have done a lot of grassroots work on the issue of health care; we have a health committee that is dedicated to that. This committee, together with local doctors, have been going door-to-door, taking note of the health situation in each house and delivering any medicines that are needed.

There is also a committee that deals with the distribution of gas. We also have Local Committees for Supply and Production, CLAPs, which ensure food is distributed in an organised manner and that hygienic practices are respected.

All of this has been key to the success of the nationwide quarantine at the local level. Unless there is a plan and the organisation at the local level to address the needs of the most vulnerable, it is unlikely that we will be able to maintain the current situation.

That is why grassroots organisation is what has enabled us to repel this pandemic so far.

How has the commune interacted with the state in terms of implementing its national measures in the local area?

Grassroots organisations working together with a state to deal with COVID-19 has been the key to success so far. We have been working closely with the state and I believe the measures that the government has taken to date have been appropriate.

But, importantly, these measures have been accompanied by the work of the different organisations of popular power. Without that we would not have had the success that we’ve had until now. I think that’s the key: popular power and the state working together.

The state not only allows us to exist but has given us instruments to carry out our work. We work hand in hand: they give us some of the tools we need and we devote all of our organisation to the task of defeating COVID-19.

At the local level, it is grassroots organisations that are orientating the state’s action and deciding the steps that need to be taken to protect everyone, making sure that not a single neighbour is left alone to have to look after their food or health needs by themselves.

The state has made a big effort to try to contain the virus and I think many people, whether they support the government or the opposition, acknowledge this. People have respected the government’s declaration of a nationwide quarantine.

There is a high level of consciousness of what it means to prevent the spread of this virus. People have, by and large, followed the rules that the state has outlined and implemented without any repression.

Grassroots organisations coordinating with the state to confront the pandemic from day one, has meant we are in a much better situation compared to other countries in Latin America, such as Ecuador, Peru, Brazil, Colombia, that face big problems in regards to the coronavirus.

Here the government confronted the issue with a lot more seriousness and responsibility in comparison to those countries.

What importance do you give to the international solidarity Venezuela has received?

Logically, we would not have been able to do what we have done to date without the help of countries such as Cuba, Russia and China. Who knows what would have happened if we had not received their support?

International solidarity is key in these moments, particularly for countries that face constant aggression from the U.S. government, which has been ferocious in its attacks, everyday continuing to put up more barriers, more blockades, more sanctions.

These sanctions have dealt a big blow to the people of Venezuela. They have also dramatically affected grassroots organisations that are trying to promote alternative projects, and in some cases promote an alternative to the state.

We have been heavily impacted by the sanctions because we have been unable to acquire the resources and materials we need to carry forward our social programs, our economic programs. None of this is easy when a country is being blockaded. We never imagined it would be this difficult.

And now the U.S. is talking about a naval blockade. It’s something that distresses us, but we will remain standing on our feet and continue to look forward towards our goal.

The sanctions, COVID-19 and now the threat of a naval blockade, all of this has dealt a big blow to the Venezuelan economy and to projects such as our commune.

That is why we have initiated an international campaign seeking resources and materials to be able to sustain the projects we have initiated within the commune. We are looking for all the different ways we can get financing to keep moving forward.

It’s not easy. We are surviving on the efforts of the commune, which are increasingly harder to maintain. That’s is why international solidarity has become key. Any support we can receive from abroad today could be critical to not only saving, but transforming, lives.