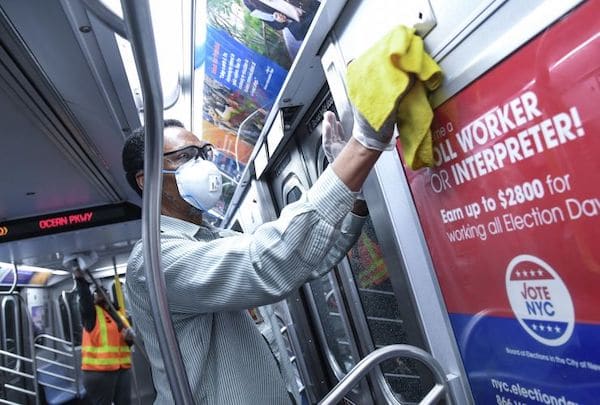 In the final chapter, “The Space Traders,” of his 1992 book Faces at the Bottom of the Well: The Persistence of Racism, Derrick Bell, Harvard Law School’s first tenured black professor, described a fictive world eerily similar to the one we know today. Local and federal governments ostensibly had no money. “Decades of conservative, laissez-faire capitalism had emptied the coffers of all but a few of the very rich,” the narrator says. Because of a host of poor choices, the country “was struggling to survive like any third-world nation,” and financial exigencies “curtailed all but the most necessary services.” The parallels are acute: “the environment was in shambles, as reflected by the fact that the sick and elderly had to wear special masks whenever they ventured out-of-doors.”

In the story, English-speaking extraterrestrial beings land on the shores of New Jersey and offer to solve everything: gold to bail out companies, chemicals to unpollute the environment. The country could have this deal for one sweet price: “all the African Americans who lived in the United States.” This was the central, controversial claim in Bell’s science fiction: that white people would sell black people to aliens for the right price. The story concludes with a successful trade. Twenty million black men, women, and children are stripped to just one undergarment, lined up, chained, and whisked away, like many of their ancestors’ centuries before.

Bell’s story lays bare the politics of disposability. But unlike the cosmos of the Space Traders, the world of coronavirus is not simply black/white. It is white and non-white; poor and not poor; essential and non-essential; white collar and blue collar; Asian and not Asian; undocumented and citizen; able-bodied and sick; young and elderly; first-generation higher ed students and their wealthier counterparts; the free and imprisoned; celebrities with access to instant testing and plebeians; red states and blue states; and countless other binaries. From these overlapping inequities we get a glimpse of who is disposable: the people who occupy the wrong category. The scholar and cultural critic Henry Giroux analyzes this politics in his book Against the Terror of Neoliberalism (2008). “It is a politics in which the unproductive (the poor, weak and racially marginalized) are considered useless and therefore expendable,” he writes—and “in which entire populations are considered disposable, unnecessary burdens on state coffers, and consigned to fend for themselves.”

Tragically, demographic data about COVID-19 deaths are beginning to bear this vision out. On Monday Kaisher Health News reported that “A Disproportionate Number Of African-Americans Are Dying, But The U.S. Has Been Silent On Race Data.” Seventy percent of those who have died from coronavirus in Chicago are black. Last week saw calls from a range of politicians, journalists, and scholars for more fine-grained data than has been made available thus far. But for many observers, who was being impacted was the first question on their mind. Beyond the latest numbers, we have other data points: history, what is visible from news and experience, and media accounts. These are imperfect, but they supply some information, and the implications are grim.

This is certainly not to say—as some multiracial groups of conspiracy theorists allege—that there is some sinister grandmaster plot afoot to harm vulnerable populations. In Bell’s allegory intent can often be a sideshow, if not an outright distraction. The truth is more banal: systemic social inequalities have made some groups more vulnerable than others, and the question of intent is irrelevant. As a criminal law professor, I teach my students that intent matters, but in some instances it does not. In this context, malfeasance, misguided policies, and indifference suffice. Moreover, while government is the easy and most identifiable culprit, popular complicity is at play here too, which makes this version of disposability different from Bell’s telling.

The people whose disposability is on widest display are those who work in immediate-risk industries. The financially precarious service workers out with the epidemiological wolves so the rest of society can buy groceries. The health care workers plastered on the news, who labor in a profession that tasks minority and women nurses, physician assistants, and technicians with what sociologist Adia Harvey Wingfield calls “equity work”: labor that makes health institutions more available to marginalized groups. The homeless population, which was already noticeable in U.S. cities, but is now more conspicuous because of their inability to shelter in place.

Then there are the undocumented agricultural workers in the west and southwest who can’t work on Zoom like their white-collar counterparts and have now become more precious in a country that has insisted on calling them illegal. There are Native Americans—some of whom have been facing a long-standing water crisis—who have uniquely high rates of diseases that make COVID-19 more lethal. There the Asian Americans who have been subject to hate crimes since this virus surfaced in the U.S. And there are the residents in poorly serviced public housing projects in places like Chicago, Baltimore, and my native South Bronx, where 2,000 public housing residents woke up to no water during an epidemic that requires vigilant hand washing.

The recent history of other U.S. disasters is also telling. The Chicago Heatwave of 1995 killed more than 700 people, mostly poor and elderly, and necessitated refrigerated trucks for dead corpses in ways that are similar to New York now. A decade later, Hurricane Katrina took the lives of more than 1,800 people in Louisiana, many of whom were poor and could not leave their homes as advised. Poor people in New York City face the same today: they do not have the benefit of escaping to second homes in Long Island and New England. And then there was Hurricane Maria, which was a little more than eighteen months ago. That disaster, which killed approximately 3,000 people in Puerto Rico, elicited similar criticisms of the federal government’s slow response and accusations that the death count was severely understated. Jason Cortés has described President Trump’s paper-towel-throwing spectacle during his visit to Puerto Rico as “the American commander-in-chief [choosing] to toss disposable paper to disposable people.”

On Palm Sunday, Surgeon General Jerome Adams gave an ominous warning. “This is going to be the hardest and the saddest week of most Americans’ lives, quite frankly,” he cautioned. “This is going to be our Pearl Harbor moment, our 9/11 moment. Only, it’s not going to be localized, it’s going to be happening all over the country. And I want America to understand that.” But who exactly will be dispensed with? It certainly won’t be all of us. Collective pronouns—the “we” and “our” and “us” of public discourse—are dangerously comforting. They give the impression of equal susceptibility, while celebrities and other prominent figures gain access to testing and top-flight health care. COVID-19 is not discriminatory as a biological matter, but history and available accounts indicate that the epidemiological fallout will be weighty and uneven.

During the debates about the Affordable Care Act, hysteria emerged around government-run “death panels”: committees of doctors who would ration care and decide who would receive treatment. This alarm ignored the long history of rationing and unequal access to health care—the subject of Beatrix Hoffman’s book Rights and Rationing in the United States Since 1930 (2012)—but it echoes legitimate dismay about bureaucrats making decisions about who lives and who dies. People with disabilities, racial minorities, undocumented immigrants, prisoners, and the poor did not figure prominently into the frenzy around death panels, but they have reason to be worried now. The uninsured, elderly, and an ever-growing portion of the middle class should be added to that list.

Social science data has already shown that African Americans are often denigrated, disregarded, and disbelieved by medical professionals when they claim they are in pain. Where will they fit in the treatment queues? Can we rest assured that American doctors will not take a cue from those in Italy, who deprioritized the lives of coronavirus patients who are chronically ill, disabled, or elderly? What about the Latinx folk who constitute a third of uninsured people in the country? Bioethical scenarios usually reserved for grad school seminars are likely to be actualized.

Rural whites have been relatively safe from the virus for now (but not its economic impact). Most live in the approximately 1,300 counties that have no confirmed cases and where social distancing is ordinary. But many of these counties are also medical deserts unequipped to handle this virus. If COVID-19 creeps into these locales, as it has in Albany, Georgia, will this group of people—many of whom perceive themselves to be “strangers in their own land,” as the title of the sociologist Arlie Hochshild’s 2018 book put it—be disregarded, too? And if the virus does not make its way to rural America, what does that say about the disposability of everyone else?

Bell’s “Space Traders” struck a nerve because it highlighted the vulnerability of an entire class of people. The difference now is that the people being sacrificed extends beyond African Americans, and responsibility can be tethered not only to government but to the private sector, the media, and the parts of the general public. The outcome of this story is uncertain. But when the dust settles, as in all U.S. disasters, there will be a tale to tell of who mattered and who was sacrificed.