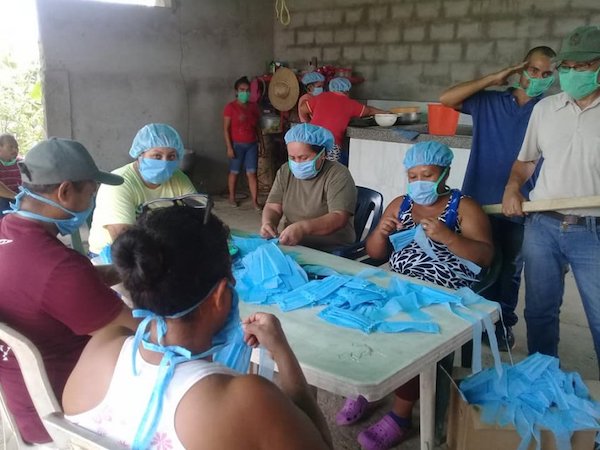 Communities across Venezuela are producing face masks, with local communal councils and communes distributing them for free to families, particularly to those most in need. Photo: Páez Potencia/Facebook

Despite a deep economic recession, a profound political crisis and international sanctions that have ravaged its health sector, the South American nation of Venezuela is demonstrating that prioritising lives is possible in the battle against COVID-19.

As of March 30, Venezuela had 135 confirmed cases of people infected with the novel coronavirus, including three who subsequently died.

The battle to contain COVID-19 will be a critical test for Venezuela. Its health system has been devastated by extensive trade and financial sanctions imposed by the United States and European nations.

Reports estimated the death toll from the impact of the sanctions was more than 40,000 in 2018 alone.

However, as Bolivar and Zamora Revolutionary Current (CRBZ) national coordinator Kevin Rangel explained to Green Left on March 30, the battle against COVID-19 is already revealing the failures of the capitalist system.

“Venezuela, like much of the rest of the world, is traversing through a very difficult period as it attempts to confront the COVID-19 crisis,” Rangel said. However, unlike many other countries, in Venezuela, the government is working with the people to confront the crisis, with “a lot of consciousness, a lot of discipline and a lot of solidarity.”

“To tackle COVID-19, the government has moved to quickly employ a mass testing regime, modelled on steps taken in countries such as China that have demonstrated, concretely, how to stop its advance,” Rangel said.

The same day I spoke with Rangel, the Venezuelan government announced it had received one million more rapid test kits from China, along with numerous other medical supplies, to deploy as part of its mass testing regime.

“This is vital to ensure we avoid a complete collapse of our health system, which has been impacted by the economic sanctions on our country,” Rangel said.

The government has also declared a national emergency and taken a range of measures to stop the pandemic spreading. Among the main measures has been the nationally-imposed quarantine.

Rangel explained that the quarantine measure, which requires people to stay in their homes, except to buy food or for medical reasons, “was first enacted about 15 days ago in the few states where COVID-19 cases were first detected. From there, to avoid the virus spreading across the country, the government took the decision to implement a national quarantine.

The government has also moved to convert health centres into spaces that can be used by citizens infected by the virus or those that have been in contact with them, so they can be attended to and given medication.

All treatment is provided for free, no matter whether a patient has to be treated in an intensive care unit or is simply resting in a health centre until their condition improves. This is all part of one of the basic pillars of the Bolivarian Revolution: its conception that free healthcare is a fundamental right.

To help people get through these tough times, Rangel explained, the government has suspended rent and loan payments and declared that no household can have their utilities cut off. It has also assumed the cost of wages for workers in non-essential companies that are not operating during the national emergency and has given workers in the informal sector a one-off social security payment.

The government is seeking to work with local community organisations “to identify those who have symptoms, to test them and identify who has and hasn’t got the coronavirus and provide them with the necessary medical advice”, Rangel said.

This process has been aided by the existing Homeland Platform, which was created to help coordinate the distribution of food directly to people, Rangel said.

This system was built amid the sanctions imposed on Venezuela. The system is used by Local Committees for Supply and Production [CLAPs, by its Spanish acronym] that exist to ensure the most vulnerable have access to food. This same system has been key to combatting COVID-19.

Alongside the CLAPs, “creative expressions of community solidarity have also emerged and initiatives taken by people to attend to the most vulnerable families,” said Rangel.

“At the local level, the CRBZ has participated in carrying out measures such as food distribution. With the government and public forces, we have worked together to implement the quarantine and raise peoples’ awareness about COVID-19, how to protect themselves, the importance of the quarantine.

“We have expressed our solidarity with the most vulnerable, working in communities to produce homemade masks, and with local communal councils and communes to distribute these for free to families, in particular those that are most in need.

“We are working in the countryside to help communities produce and distribute food directly to people so they won’t have to leave their homes during the quarantine period.

“We also participate in the Popular Solidarity Aid Network. This network allows us to organise solidarity efforts, to attend to families and family members who are more vulnerable or most affected by the sanctions.

Through this process we have also developed strategies to help facilitate more structural changes in the community. Our aim is not to just give charity but to help these families advance and get out of poverty. That is the strategic aim of the network.

Few countries face a bigger hurdle in overcoming the challenge posed by COVID-19. As Rangel explains, the “economic sanctions and the constant imperialist aggression limits our ability as a nation to provide basic services.

“In Venezuela, we say we face two enemies: on the one hand, COVID-19, and, on the other, US imperialism and its right-wing allies in the country.

“We face a huge challenge, because we are waging the battle against this pandemic in the midst of an intense blockade imposed by a genocidal and inhumane government that is not only maintaining but strengthening these measures.

“In its latest calculated manoeuvre against our country, the US president has made a grotesque and defamatory accusation of narcotrafficking against President Nicolas Maduro. This is just a continuation of their plan to exert maximum pressure on Venezuela by opening up another front, a legal front, in their hybrid war.

“We have also seen in recent days the decision by the International Monetary Fund to deny Venezuela’s request for an emergency loan to combat the coronavirus. This is a clear demonstration that the IMF is an instrument of the U.S. elites.

“That is why international solidarity, and the international conventions Venezuela has signed with countries, particularly with Cuba, have been key.

“The convention with Cuba has been central to our ability to create a health system that can provide healthcare at all levels. It is this healthcare system that has been redirected towards combating COVID-19.

“On a smaller scale, the Popular Solidarity Aid Network has also benefitted from the important support we have received from around the world, including from friends in Australia. We need to continue to develop this concrete solidarity.

“Humanity today faces the challenge of stopping the spread of COVID-19, something that must be done in a unified and coordinated manner.

“Yet, what we are witnessing is just further evidence of how unsustainable the capitalist system is. While some seek to put humanity at risk, others offer material solidarity and cooperation.

“That is why the current fight is not just against COVID-19, but for a more humane world, one in which solidarity is the basis for relations among people.

The current system, one in which elites put the interest of companies ahead of the interests of people and their health in the midst of a pandemic, is unsustainable. We need to change the system to save humanity.