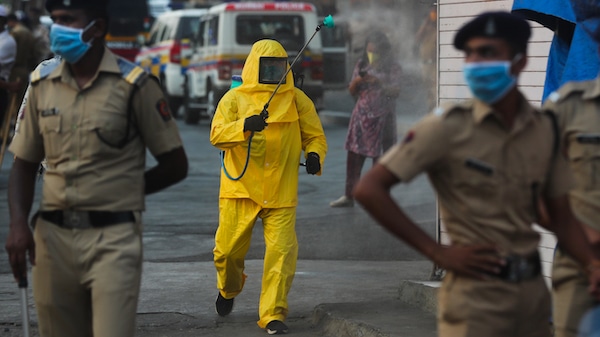 A civic worker sanitizes an area as policemen stand guard after a protest against the extension of the lockdown, at a slum in Mumbai, India, Tuesday, April 14, 2020. Indian Prime Minister Narendra Modi on Tuesday extended the world’s largest coronavirus lockdown to head off the epidemic’s peak, with officials racing to make up for lost time. (AP Photo/Rafiq Maqbool)

Last week, 22-year-old Dilshad “Mehboob” Ali was dragged into a field on the outskirts of Delhi and beaten with sticks and shoes by an enraged crowd demanding to be told, “who else is behind this conspiracy?” His attackers believed he was part of a “corona Jihad:” an evil plot by India’s Muslim minority to spread the disease and kill as many Hindus as possible. Ali was dragged to a temple and told to convert to Hinduism before they would allow him to go to the hospital. Images of the incident went viral, illustrative of a nationwide assault on the country’s nearly 200 million Muslims.

Ali is part of the Tablighi Jamaat movement, identified by the government as the main culprits in spreading the coronavirus across India. Between March 13 and 15, the movement hosted a convention in the Nizamuddin area of Delhi, attended by around 8,000 people from all over the country and Asia. After some tested positive for COVID–19, India’s Hindu nationalist Bharatiya Janata Party (BJP) government began demonizing them as the source of the outbreak that has so far killed 448 people, but is feared could rip through the country’s densely populated slums like wildfire. Senior BJP politicians immediately sparked fears of a “corona jihad.” “The central and state governments are leaving no stone unturned in the decisive fight against the COVID-19,” said Rajeev Bindal, president of the Himachal Pradesh BJP party.

But some people, including Tablighi Jamaat, members are moving like human bombs to thwart their efforts.

Other BJP leaders claimed that Muslims were carrying out “corona terrorism” and were spitting on doctors and other healthcare workers. “It’s clear, their aim is to infect as many people as possible with coronavirus and kill them,” tweeted Delhi politician Kapil Mishra. Other BJP figures have called it a “Talibani crime.”

Even fellow Hindus have not been spared by BJP bigotry. A report from CNN highlighted how Dalits, the lowest-rung in the officially outlawed Hindu caste system, have been prevented from purchasing food and medicine. Dalits are often considered inherently dirty by higher castes, so they have been refused access to shops and entry to certain neighborhoods by others invoking coronavirus fears.

While the government has initiated laws against spreading false information and social media has existing rules prohibiting hate speech, it becomes more difficult to enforce when senior political leaders themselves engage in it. Nevertheless, it is clear from the torrent of Islamophobic fake news circulating on Twitter that it is doing far from enough to root it out. The hashtag #CoronaJihad has trended for days, with fake news and hate speech abounding.

The upshot of the campaign has been a dramatic increase in Islamophobic attacks and anti-Muslim sentiment. Across India, Muslims are being barred from entering neighborhoods while in others Hindus face fines if caught fraternizing with them. Others have been beaten with bats and lynched.

There has also been fake news aimed at infecting the Muslim population themselves, with videos circulating on TikTok and other platforms telling users that the virus does not affect Muslims and that they should not wear masks.

The wave of anti-Muslim violence has shocked many observers, but not surprised them. Prime Minister Narendra Modi came to national attention while chief minister of Gujarat State during the massive wave of anti-Muslim pogroms in 2002 that saw over 2,000 killed and 200,000 Muslims driven from their homes. For a great many in India, the fact that he is widely considered its architect is a point in his favor. He won re-election in an overwhelming landslide last year.

However, he has faced stiff opposition, primarily from India’s many religious minority communities, who see his explicitly Hindu nationalist agenda as dooming them to becoming second-class citizens, or worse. The last year has seen the country in upheaval following his controversial Citizenship Amendment Act (CAA) and National Registration Council (NRC) laws. The CAA makes it easier for people fleeing persecution from India’s Muslim-majority neighbors to gain citizenship. But the policy explicitly prevents Muslims and dalits from taking advantage of the law; something critics say breaks India’s tradition of secularism.

The NRC is arguably much more nefarious. The NRC is a new body overhauling Indian citizenship laws, requiring citizens to provide extensive documentation about themselves and their ancestors, something hundreds of millions will surely be unable to do. Without this documentation, the government is able to strip citizenship away from anyone it chooses, rendering large populations illegal overnight. The policy has already been implemented in the northeastern state of Assam, where 1.9 million people–most of them Muslims–have been declared stateless and without rights. The BJP government is currently building a network of detention centers, not unlike those on the U.S./Mexico border, to house the new population of “illegal immigrants.” In February, Giriraj Singh, a minister in Modi’s cabinet, sparked fury after he claimed that India made a big mistake not fully committing to genocide against the entire Muslim population upon the country’s founding in 1947.

“It was a big lapse by our ancestors that we’re paying the price for now. If at that time Muslim brothers had been sent there and Hindus brought here, we wouldn’t be in this situation,” Singh said. The situation he was referring to was the protests and the anti-Muslim pogroms sweeping the country that killed 36 people.

If some hoped that a nationwide lockdown amid a pandemic that threatened everyone would dampen the flames of communal hatred and inspire a collective spirit that would transcend religion, that hope has been completely dashed. India is accelerating down the track of religious strife, and the government itself is driving the vehicle.