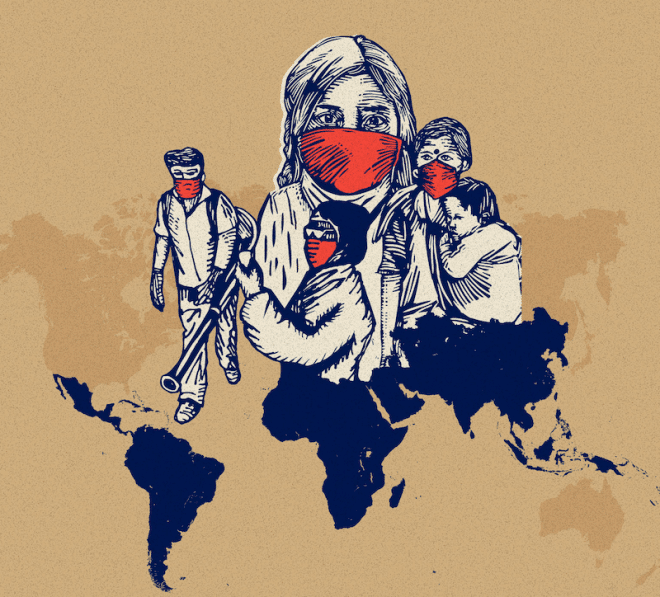 Reflections on the COVID-19 pandemic by TNI staff

This analysis is a result of a collective discussion by TNI staff on the many dimensions of the COVID-19 pandemic drawing on the wisdom of many allies and friends. We hope it helps join some of the dots of this complex and still unfolding health emergency and supports the movements fighting to protect the most marginalised and to build a more just world.

This pandemic health crisis impacts a world already in crisis. It will have a disproportionate impact on the most vulnerable in our society and particularly in the Global South unless we mobilise and demand a just response to the pandemic. It is a wake-up call that the current capitalist economic system is not fit to protect the health of us as individuals or as societies.  We must learn the lessons to defeat COVID-19, address the multiple crises we face―from accelerating inequality to the climate crisis―and build the just sustainable society we all desire.

Immediate priorities–protect those made vulnerable by the global economic order

The pandemic is unfolding in a world that is deeply unequal and already facing a multi-dimensional social and environmental crisis. Billions of people are already in highly precarious conditions because of the unjust global economy and therefore have neither the good health nor the economic possibilities to deal with either the virus or the wider economic and social disruptions that have resulted. For the majority of people in the Global South, this pandemic is likely to be particularly devastating given the ongoing legacies of colonialism, decades of debt and structural adjustment and unjust trade relations. This legacy has left health and social systems drastically underfunded, weakened and privatised and even less equipped than the overstretched health systems in the Global North to cope with a pandemic.  We therefore must fight to ensure that every public policy today is directed towards supporting the most vulnerable and marginalised rather than just further rewarding the wealthy and powerful.

These could include immediate measures such as:

Globally, this should include among others:

COVID-19 has exposed the massive vulnerabilities and injustices of the global capitalist system. It is critical that we understand these in order to prevent future pandemics and to learn how we can address other future crises, such as the climate crisis. COVID-19 exposes:

Every crisis has those who seek to profit from it–and we must be vigilant to expose them and prevent their capitalising from this social crisis.

In particular, we must stand against the corporations that seek to profit, such as the pharmaceutical giants and private health service providers.

We must also stand against the reactionary racists and politicians that are using this moment to blame the Chinese, migrants and other ethnic minorities and to enact reactionary, xenophobic agendas that deprive people of their human rights.

Finally, we must not let this moment normalise the use of surveillance, military actions or authoritarian measures that undermine freedom and democracy. Surveillance and restrictions on movement must be combined with mechanisms of democratic accountability to independently assess whether it’s necessary and to ensure it is repealed when possible. Military involvement should be strictly under civilian medical and public health control with military resources and equipment diverted to public health needs. Any collection of personal data in an environment of unprecedented coercive state measures should be limited, temporary and strictly tied to health needs.

Various restrictive emergency measures being enacted right now may be appropriate as short-term responses to a public health emergency, but must not be allowed to become the new norm after the immediate crisis is under control.

COVID-19 shows that neoliberalism has led far too many to accept the dogma that there is no alternative, depriving us of key tools and policies needed to confront injustice and today’s systemic crises. COVID-19 has shown that dramatic policies are both needed and can be implemented in the face of a crisis. The fact that states have dramatically enacted policies considered politically impossible within hours shows it is entirely possible to address the climate crisis with bold and ambitious policies by 2030 as science demands. They are also going to be absolutely necessary to protect people’s livelihoods in the face of an economic crisis that will result from this pandemic.

We must remember that despite the scale and impact of this particular emergency, there are many existing health crises that never receive sufficient attention or a priority. TB kills 1.5 million people annually in Global South. More than 800,000 people die from lack of clean water and sanitation each year. Around the world at least 137 women are killed by a member of their family each day. We must dedicate the same level of commitment to tackling these ongoing social and public health crises.

COVID-19 also shows that despite decades of neoliberalism, peoples’ inherent sense of solidarity and compassion is very much alive. The millions of people worldwide setting up mutual aid groups, finding out ways to support their neighbours, meeting online to pressure for public policies for the most vulnerable show that a different world is indeed possible.

Let’s make this moment and experience of solidarity a permanent one–creating the systems, structures and policies that can always protect those who are marginalised and allow everyone to live with dignity.

Solidarity is the cure. Justice is the vaccine.