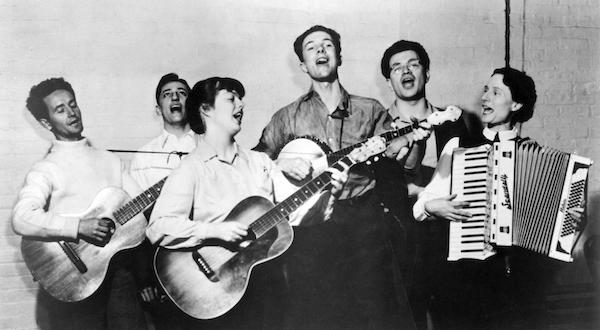 UNSPECIFIED – CIRCA 1970: Photo of Woody Guthrie Photo by Michael Ochs Archives/Getty Images
It’s axiomatic: In hard times, the vulnerable suffer most. Although the Great Depression left no American untouched, those who lived in the penury of Kentucky coal country bore a greater burden.

“In the early thirties I had one of my babies starve to death,” recalled Kentucky singer Sarah Ogan Gunning in Voices From the Mountains.

It literally happened — people starved to death. Not only my own baby, but the neighbors’ babies. You seed them starve to death too. And all you could do was go over and help wash and dress ‘em and lay ‘em out and sit with the mothers until they could put ‘em away.

On February 16, 1931, the Harlan County Coal Operators’ Association reduced their employees’ wages — already at subsistence level — by 10 percent. The miners responded by organizing a union. Union members were either fired and evicted from their company-owned homes, or beaten and killed. Soon there was a general strike. Thus began a period of harassment and violence known as the Harlan County War, or more simply, Bloody Harlan. The sheriff’s department acted as enforcers for the mine operators.

Sam Reece worked as an organizer for the National Miners Union. “Sheriff J.H. Blair and his men came to our house in search of Sam — that’s my husband — he was one of the union leaders,” remembered musician and activist Florence Reece. “I was home alone with our seven children. They ransacked the whole house and then kept watch outside, waiting to shoot Sam down when he came back. But he didn’t come home that night.”

The next morning, Florence, in her words, “tore a sheet from a calendar on the wall,” and wrote a new lyric to an old melody.

Come all of you poor workers, good news to you I’ll tell

If you go to Harlan County, there is no neutral there

Reece couldn’t have known that what she created would become the most durable anthem of the labor movement, and a template for protest songs for decades to come. “Which Side Are You On?,” written from acute personal trauma, has been universalized, both in lyric and musical modality. After making its way out of Harlan County and into a New York recording studio, it got modified to fit the message of countless underdog protagonists.

“Which Side Are You On?” quickly became an anthem in the union halls and picket lines. Jim Garland, another organizer and songwriter, immediately used it as a tool for protest. “In the course of such fights, songs expressed people’s feelings in a manner that allowed them to stand together,” he said. “Rather than walking up to a gun thug and saying, ‘You’re a bastard,’ which might have resulted in a shooting, we could express our anger much more easily in unison with song lyrics.”

In December, 1931, Garland and his cousin Aunt Molly Jackson travelled to New York to give concerts to raise money for the striking miners. They performed “Which Side Are You On?”, where it ultimately caught the ear of Pete Seeger.

By the early 1940s, Seeger was changing the face of American popular culture. He formed a band called the Almanac Singers with folk hero Woody Guthrie and singers Lee Hays and Millard Lampell. They sang folk songs — some they wrote and some learned from others — that were pro-union and anti-war. “They did not perform in costume, either of the concert stage or of the radio barn dance,” wrote Robert S. Cantwell in When We Were Good: The Folk Revival, “and yet their street clothes, in which they ordinarily appeared, ranged from pieces of business suits in various permutations and combinations to dungarees, workshirts, and construction boots….”

“Back where I come from, a family had two books,” remembered Arkansas-born Lee Hays. “The Bible to help ’em to the next world. The Almanac, to help ’em through the present world…We became the Almanac Singers.”

The first Almanac Singers album, Songs for John Doe, sold well enough in Communist bookstores to merit a new record. Talking Union was recorded in the same Central Park studio in May, 1941, and released on Keynote records in July. “Which Side Are You On?” was the last of its six songs. Even though they didn’t change Reece’s original melody or lyric, the Almanac Singers took “Which Side Are You On?” from the personal to the universal. It’s instructive to hear both versions. First, Reece, singing her composition in later years.

The melody for this song originated centuries ago in England, and is known as modal music. Modal music doesn’t have a key or chords in the way we would understand from, say, a Beatles song. Traditional Irish and Scottish folk music, which became the basis for Appalachian folk music, is modal, and predates 1650.

Reece’s performance is declarative and singular. She sings as an individual, without accompaniment or harmony. She sings to us as a group of individuals, each with a decision to make. “You have to be on one side or the other,” she once said. “In Harlan County there wasn’t no neutral. If you wasn’t a gun thug, you was a union man. You had to be.” She is asking us to decide, because even if the idea of community, in the form of a union, was comforting, the reality is that people were being picked off one by one.

The Almanac Singers’ version of “Which Side Are You On?” is an example of tonal music. (Again, think of a Beatles song, with chord changes and harmonies.) Pete Seeger begins with a stark, descending banjo riff — a foil for the upcoming single-string guitar melody — and then sings the first verse. The chorus is a haunting response to his call, sung by a group of voices. A community has formed, and what they sing is as much indictment as encouragement. Florence Reece’s modal melody, an artifact of Appalachian fiddle music, has been incorporated and expanded. We hear harmonies now, as sympathetic as a friend, as organized as a union.

Jim Garland, who brought “Which Side Are You On?” to New York, stayed and became part of the Greenwich Village folk scene, one largely founded by people like Seeger and Guthrie. It was an alternative world, one informed by a mix of races and cultures and classes. These folk artists collected and composed songs of the people, performed them in small clubs, union halls, and regional festivals, and made them available through recordings, virtually none of which were available to Florence Reece back in Kentucky.

Seeger had a knack for popularization. Remember, it was he who changed “I Will Overcome” to “We Shall Overcome.” Seeger also identified “Which Side Are You On?” as being pliable to other applications. He penned some new lyrics in support of the National Maritime Union in 1947:

The men who hate our union, they say we dodged the draft

From there the song gained immortality. The Freedom Singers, a group formed by the Student Nonviolent Coordinating Committee in 1962, rewrote the lyric to reflect their Civil Rights struggle.

Come all you Negro people, lift up your voices and sing

Will you join the Ku Klux Klan or Martin Luther King?

They certainly employed, to great effect, the Almanac Singers’ call and response arrangement, bringing altogether more church into the proceedings.

Len Chandler, a topical singer from Greenwich Village who marched with Dr. Martin Luther King from Selma to Montgomery, wrote his own version:

Come all you Northern liberals, take a Klansman out to lunch

But when you dine, instead of wine, you should serve nonviolent punch

Through the rolling years, “Which Side Are You On?” has been adapted and covered by myriad artists, including Dropkick Murphys and Ani DiFranco. The question renews itself as each generation struggles against inequality.

The melody proved as durable as the lyrics proved malleable. Although Reece claimed to have borrowed the melody from an old Baptist hymn, the truth is much less sanctified. A listen to an a capella version of “Ho Lily Ho” by Appalachian singer Sarah Hawkes reveals the song’s origin. This is an ancient tune, also known as “Jack Monroe.” In most of its iterations, the song tells the story of a young woman who dresses like a man to find her lost lover in battle. In every version, fearlessness defines her:

‘Your waist is slim and slender, your fingers they are small

Your cheeks too red and rosy to face a cannon ball’

‘My waist, I know, is slender–my fingers they are small

Even if Florence Reece, the young and beleaguered Kentucky housewife, did not know the original song’s themes of transformation and bravery when she wrote her lyric, she carried them forward nonetheless.

Now it’s our turn. The new lyric has yet to be written, but the circumstances that will inspire it are with us daily. There may indeed be one humanity; there may indeed be “no such thing as other people’s children,” but right now this world is binary, and we are called to choose. Which side are you on?

Tom Maxwell is a writer and musician. He likes how one informs the other. Editor: Aaron Gilbreath; Fact-checker: Ethan Chiel