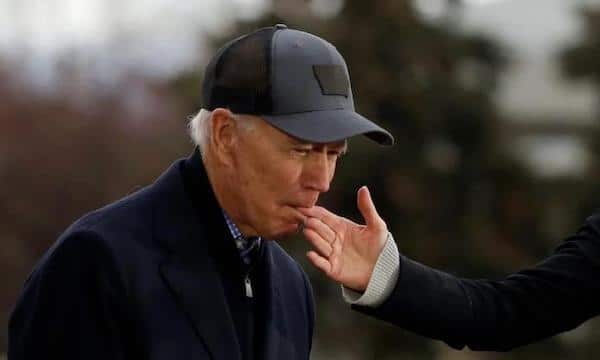 The only thing Joe Biden and Donald Trump should be battling over is the top bunk of a prison cell. Instead, these two crooks are vying for the presidency of the United States. If Biden is this year’s lesser evil, he is sorely testing the meaning of “lesser”. No Democratic politician has worked longer and harder to turn the U.S. into the nightmare it is today.

While many are alarmed that Biden’s brain appears to be melting, left-wing academic Steven Salaita pointed out on Twitter that his incoherence is “actually his most likeable quality”. That is borne out by Branko Marcetic’s book Yesterday’s Man: The Case Against Biden, which details just about everything this scumbag has ever done.

In his first political foray, 29-year-old Biden shocked all by becoming a member of the U.S. Senate for Delaware in 1973. The secret to his success was embedded deep in his brain for the rest of his career: always orient to your rival’s right-wing voters. In the 1970s, Delaware resisted desegregation harder than most northern states. Biden built his career by assuring the white suburban middle-classes that they didn’t have to vote Republican to elect a racist.

From 1975 to 1980, Biden led the charge against busing–a limited attempt to desegregate schools by allowing Black students to travel outside their own neighbourhoods to white schools and vice versa. The local press described Biden as a “born-again convert to anti-busing”, who “embraced his new faith with an almost messianic zeal”. Biden joined forces with Dixiecrat-turned-Republican Strom Thurmond, one of the Senate’s staunchest segregationists, who raped and impregnated his Black teenage maid. At his funeral in 2003, Biden eulogised Thurmond as “a brave man” and a “good friend”, who lived “a long and good life”.

Mass incarceration is Joe Biden’s American Dream. A man with an unhinged obsession to “Lock the SOBs up”, he has moved bills and amendments that achieved or tried to achieve the following: eliminate parole, enforce mandatory and longer sentences, allow evidence illegally acquired to be used in court, make it harder to plead insanity, restrict the right to appeal, lower the age at which children can be tried as adults, allow police to seize the assets of people who haven’t been charged, and drug test schoolkids. He didn’t just wave such legislation through; he wrote the damn bills. When Republican president George H.W. Bush expanded the War on Drugs in 1989 under the slogan “more prisons, more jails, more courts, more prosecutors”, Biden replied: “Quite frankly, the president’s plan is not tough enough”.

A year before voting for Democratic president Bill Clinton’s 1994 Violent Crime Control and Law Enforcement Act, Biden bragged on the Senate floor: “Every major crime bill since 1976 that’s come out of this Congress … has had the name of the Democratic senator from the state of Delaware: Joe Biden”. Clinton’s bill created 60 new death penalty offences and imposed the infamous “three strikes” rule, imprisoning repeat offenders for life–no matter the charges. Between 1980 and 2005, the U.S. prison population exploded by 734 percent.

Alongside Hillary Clinton, Biden is the Democratic spokesperson for war. He’s like your senile uncle, except instead of dropping racist slurs at your family dinner, he drops bombs on someone else’s. In 2001, he was one of just four members of Congress to meet with George W. Bush to map out the public relations for a war on Afghanistan. As chair of the Senate Foreign Relations Committee, he engineered intelligence hearings in which officials gave false testimonies about weapons of mass destruction in Iraq. “Let loose the dogs of war”, he said about an Iraqi invasion. “I’m confident we will win.” When Barack Obama assumed office and continued the wars, Biden became his “foreign policy guy” and pushed for the expanded use of unmanned drones.

Marcetic attacks Biden as a hopeless negotiator, but the truth is that Democrats and Republicans have a shared class interest. While Democrats publicly decry the latest Republican attack and vow to fight it, operators like Biden pick up the phone and concede everything behind the scenes. Progressive Democrats express disappointment with the outcome of the “negotiations” but vote through all the concessions anyway, all while reassuring working people that “it may not be perfect, but it’s something”.

When Democrats lost control of the House of Representatives in 2010, funding for unemployment entitlements was about to expire. Biden called Republican Senate leader Mitch McConnell and offered historic tax cuts to the wealthy for two years in exchange for one year of unemployment payments. Obama’s re-election in 2012 strengthened the Democrats’ position, but this time Biden offered Republicans US$2 trillion in cuts to Medicaid, pensions and food stamps.

If this is the man to save us from Trump, it’s time to ask: who the hell will save us from Joe Biden? In the middle of the coronavirus pandemic, Biden still opposes universal health care. Just last month, a former staffer accused him of sexually assaulting her. No wonder most polls put him only just ahead of Trump.

Following Vermont Senator Bernie Sanders’ pathetic surrender to Biden–whom he called a “good friend” and a “decent man”–progressive Democrats have begun lobbying Biden in the hope that the presumptive nominee will adopt some of Sanders’ platform. Ten liberal lobby groups penned an open letter pleading with Biden to offer a bold platform to win the election. “We need a vision for the future, not a return to the past”, the letter from groups such as Justice Democrats and NextGen America reads. “We grew up with endless war, skyrocketing inequality, crushing student loan debt, mass deportations, police murders of Black Americans and mass incarceration … We’ve spent our whole lives witnessing our political leaders prioritize the voices of wealthy lobbyists and big corporations over our needs.”

It’s an accurate characterisation of the depravity of U.S. capitalism, but it’s delusional and dangerous to plead with Biden to fix it. He knows he’s already got these groups’ votes. All he wants now is the vote of disaffected Republicans–and the tick of approval from Wall Street, Silicon Valley and the Pentagon.

Most U.S. progressives are familiar–and deeply dissatisfied–with Biden’s criminal record. But, the argument goes, Trump is uniquely dangerous and literally anyone else will do. The corollary of this view is that anyone who refuses to vote for Biden is handing victory to Trump. That’s the view of eminent intellectual Noam Chomsky, who, in an interview with the Intercept’s Mehdi Hasan, said that not voting for Biden in swing states would in effect be a vote for Trump, and comparable to aiding the rise of Hitler in 1930s Germany.

In an open letter published in the Nation, former activists from the 1960s era New Left wrote that while they “welcome Bernie’s wise choice [to endorse Biden], we are gravely concerned that some of his supporters … refuse”. The letter lays responsibility for a future dictatorship on the latter. “Some on the left cannot see the difference between a capitalist democrat and a protofascist. We hope none of us learn this difference from jail cells.”

Without endorsing Biden, some of Sanders’ more left-wing campaigners want Biden to go left as a consolation for their failed socialist strategy in the Democratic Party. Marcetic’s latest article for Jacobin magazine appeals to Biden’s amoral opportunism. “If Biden and Democrats of his generation could cravenly sell out their principles for political expediency and pretend to be something they’re not once, they can do it again, only for the good”, he writes. “All he needs to do is the exact same thing he did the first time: swim with the tide.” This fundamentally misunderstands the Democrats. The tide they swim with is not produced by the voting public, but by the capitalist class. They exist to advance the interests of their corporate backers and of U.S. empire in a way that maintains a veneer of progressive values.

Voting for Biden will not stop the danger that Trump represents. If he wins, U.S. capitalism will not have suffered the slightest blow. And if he loses, the left will have wasted months on yet another failed electoral campaign instead of building the sort of resistance needed to hold back a new wave of Republican attacks.

US Marxist Hal Draper wrote about the pitfalls of lesser-evilism as Democrat Lyndon B. Johnson was facing Republican Barry Goldwater in the 1964 presidential election. The former was for ending the Vietnam war and the latter was for deepening it. Johnson won, then escalated the war and slaughtered millions of Vietnamese, who weren’t consoled that Johnson had promised not to. “So who was really the lesser evil in 1964?”, asked Draper. “The point is that it is the question which is a disaster, not the answer. In setups where the choice is between one capitalist politician and another, the defeat comes in accepting the limitation to this choice.”

Biden won’t save us. But he might save Donald Trump. Many will vote for Biden without grand illusions, and that does not preclude their ability to struggle. But it does cut against the logic of struggle. Lesser-evilism is a strategy of desperation. We’re willing to be ruled by evil if it staves off more evil for a few years. That has led us nowhere but here.

We don’t just need to vote Trump out; we need to destroy the system that created him. The Democratic Party has built and is still building that system. If we don’t tear capitalism out from the roots, it will just sprout more Trumps. And there will always be a lesser evil to nourish the soil.