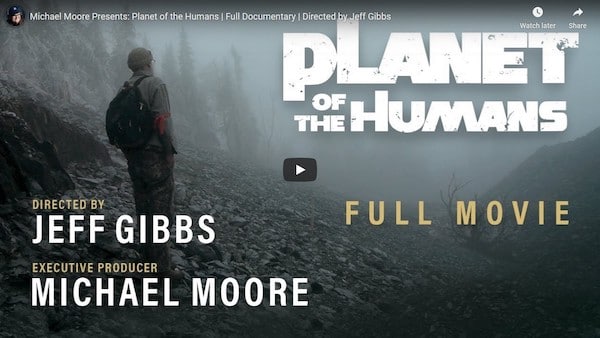 Planet of the Humans

Mostly, Planet of the Humans is just so fucking bad. So bad that its good points are useless. It does have some good points–there seem to be a lot of rock festivals in Vermont that claim, incorrectly, to be running on solar. They totally deserve ridicule. But you would never recommend this film to anyone. You’d be carrying water for the fossils if you did. So it’s a failure on its own terms, since it wants, or pretends to want, to bring the truth about renewables to the green movement. And it may even, judging from the ending, where both Bill McKibben and the Sierra Club are said to clarify their positions, make us a bit more careful about our tactical alliances. But boy oh boy does this guy—Jeff Gibbs is his name—know less than he thinks.

It’s too bad, because his central complaint, that the environmental movement is looking to green tech to save us, and believing quite a bit of nonsense in the process, is pretty legit, though it’s less legit every year, and you wouldn’t know it from this film. Anyway, this kind of techno-optimism is and has always been a huge mistake, and it throws us to the mercies of the snake-oil salesman and, in general, to the corruptions of capitalist realism. This is an excellent point, and it could have been made well. Gibbs could have built a good bit of teaching around it. But instead he threw so many cheap shots and so much old news into the bucket that it ruined, and I mean *ruined*, the mix. The truth is that he doesn’t have the slightest idea about how to make his critique in a helpful way.

Once you get beyond the pro-solar rock-concert bullshit, Gibbs’ rap against renewables is embarrassingly wrong. Not all of it, but most of it. Moreover, it is fantastically dated. He seems to not even know that the net-energy analysis of renewable energy systems is a thing. Which is odd, because Richard Heinberg is an expert in this field, and Gibbs embeds him at the center of his narrative. Heinberg, alas, has long been pessimistic about the potential for renewables to produce net energy on the scale we’ll need, and here he says that “we’re getting, in some cases, no energy from these potential options,” which is just what Gibbs wanted. *

Then, unsurprisingly, talk turns to population. Heinberg’s provides the framing — “There are too many human beings, using too much, too fast” — and then Gibbs takes us off to the Malthusian races, wherein we’re told, by Stephen Churchill (an anthropologist who’s called out as “a scientist”) that “I don’t think we’re going to find a way out of this one.” The mix goes on, and in it we get exactly one sentence—“our consumption has also exploded, on average ten times per person, and many times more in the western world” — that might in any way be taken as a reference to class, or to class footprints. As if you could just multiply the number of people by their average impact and, by so doing, get to the fundamental truth of our predicament.

So Planet of the Humans is a very disappointing movie, given that its heart, or at least part of its heart, is in the right place. That said, Gibbs—and Michael Moore, who is backing this project—winds up carrying water for  people who want us to believe renewable energy is an illusion, or even a con. The method is what Dave Roberts calls “hippy punching.” Gibbs makes a particularly bad bet on Ozzie Zehner, the author of Green Illusions: The Dirty Secrets of Clean Energy and the Future of Environmentalism, who is obviously happy to get the attention.    I looked up the book. It was published in 2012.

On the other hand, alas, there is another hand. His critique of biofuels, in particular, is generally spot on. I was briefly beguiled by the idea back around 2004, when I was paying too much attention to the carbon cycle and not enough to the realities on the ground. But everyone in the movement knows the score on this today, everybody who’s paying attention that is. Just like no-one still believes that natural gas is a bridge to transformative decarbonization, except maybe Michael Bloomberg. And while there are clearly idiot salespeople in the solar movement, it’s not like they’re representative. Though maybe they are, some of the time. The business of business, is, after all, business. But the Sierra Club had its reasons for joining hands with Bloomberg in the Beyond Coal campaign, and they were good ones. It used his money to shut down a lot of coal plants. Case closed.

And as for calling Jeremy Grantham a “timber investment billionaire,” spare me. Watch The Race of our Lives.

The pro-nuke people love the film, by the way. Gibbs does take one wee little shot at nukes near the end, but he is so obsessed with revealing “the truth” about renewables that he doesn’t think to scope nukes into his critique, which couldn’t bear the weight in any case.  There are lots and lots of people that could have helped him get this right, but he is obviously the kind of guy that doesn’t need any help. It seems that he wanted to fuck this up all by himself, and he did.

The really bad stuff comes when Gibbs waxes metaphysical about the root causes of the environmental crisis. Yes, he fingers capitalism, and at one point he even gets down to fingering *this* capitalism, but mostly he’s on about hubris, and the denial of death, and our inability to manage our own appetites, and so on. All true, and all more or less beside the point, as he cites them, because the proportions are all wrong. Such critiques, put to these uses, are par for the course for the old environmentalism, but the old environmentalism is old news.  His pithiest comment about why we are in such deep shit: “it’s us,” and then, “it’s everything.” And then he adds that “the takeover of the environmental movement by capitalism is now complete,” which is so far behind the curve that it’s coming up on its own asshole.

Bottom line. This movie is a warning.  The generation of environmentalism that Gibbs is critiquing here needs to be put to rest, once and for all. We need a justice-based politics of planetary limits–with just transitions and fair shares all around. And it has to be a technologically sophisticated one.

The orangutan stuff at the end, in the Palm oil deforestation scene, is very, very sad.

What are we left with? That even Bill McKibben, who has done so much, and in such good faith, can be made to look like shit. Likewise Al Gore. And that the Sierra Club, or so it seems from the film, has made a few real mistakes. None of the subtlety is visible here. In fact, Gibbs gets close to charging actual corruption, without a damn bit of evidence. Which makes you wonder what the hell Moore is doing in this mess, which in addition to all its other faults does nothing, and I mean nothing, to encourage either wisdom or mobilization.

As for myself, I think learning is good. There’s a lot to learn. And there’s a lot of bullshit in the world too, and we’re done if we don’t call it out. The good news is that we’re all learning fast, and that good people listen when you call them on their bullshit.

That’s how you can tell.

* In an earlier version of this post, I was too hard on Heinberg’s net-energy work. In particular, I did not take account of his 2016 book, Our Renewable Future, in which he he lays out a pessimistic but fair-minded sense of the net-energy potential of solar and wind, saying for example that:

“We are still at too early a stage in renewable energy deployment to know how much storage and capacity redundancy will be needed, and we are at too early a stage in EROEI studies to be able to judge whether the more optimistic or more pessimistic results for PV are more accurate. However, if it turns out that high levels of storage are required and that the middle-of-the-road EROEI figures for solar PV of 10:1 and for wind of 19:1 (without storage) are justified, then as society transitions away from high-EROEI fossil fuels its overall economic efficiency may decline, as a somewhat higher proportion of produced energy will have to be reinvested into further energy production. This may have implications for the possibility of further economic growth, as we will consider later in this chapter.”