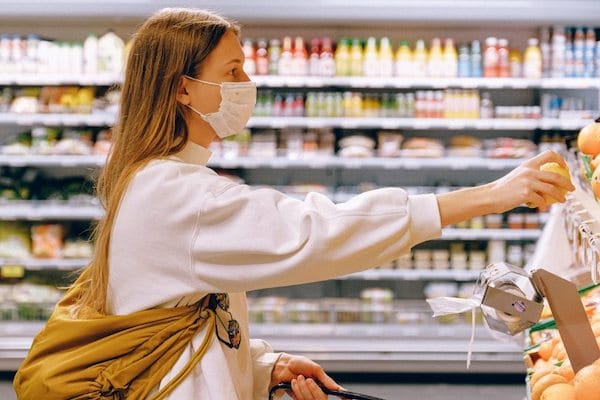 (Photo by Anna Shvets from Pexels.)

The global pandemic and associated developing global recession are calling into question a whole range of economic truths and demanding novel solutions to various interlinked societal problems. In this blog post, I want to connect what we’re currently seeing in the retail sector during this pandemic to deep-seated narratives about the nature of economic exchange, in particular to the notion of “the market”.

The market is one of the most dominant concepts for making sense of the social world, primarily because of the prestige of the economics discipline and the elevation of the market concept by the discipline (albeit in a highly abstract manner). At its most basic, it paints the economic sphere as akin to a marketplace, where there is a level playing field and rivals compete for custom primarily through having the keenest of prices. Other, more complex, ideas often get laid over this concept, such as the market pricing mechanism allowing supply and demand to equilibrate, price signals communicating complex information to market participants, and, as such, the market allowing for decentralised decision making led by consumer demands. (For a much (much) fuller account of the market concept, see here.)

However, as a result of the coronavirus pandemic increased demand for basic goods–such as toilet roll, hand sanitiser and flour–has put a strain on the distribution of these goods and has engendered a response quite dissimilar to the narrative of the economic system as a competitive, decentralised, profit-maximising market. What we have seen, instead, is retailers working as sites of governance in order to ensure a degree of equity in the distribution of resources.

We’ve seen this governance occur in a variety of ways. Amazon first sought to stop profiteering by its third party sellers through suspending the accounts of individuals selling hand sanitizer, face masks, and toilet paper at large mark-ups on its platform. Later, Amazon announced it will stop warehousing and shipping non-essential items from third party sellers and instead focus on pandemic supplies. In taking these actions, Amazon is not following private-benefit profit-maximising behaviour, but instead is focusing on meeting public and societal needs.

Supermarkets have been even more involved in governing during the crisis. Several supermarkets have introduced periods during which only older consumers are allowed to shop. Most have introduced rationing of items, and have not shifted their prices substantially in response to increased demand but have instead have ordered their factories to increase production as well as working with their suppliers to meet the surge in demand. They have also sought to shape consumer behaviour, requesting younger consumers pick things up in store rather than using their delivery service.

What does this governance by corporations, then, tell us about the economic system? Well, the first thing it shows is that the economic system is far from being decentralised, even while not being run by the state. What we have, instead, is a system that is fragmentarily centralised. The market narrative’s focus only on exchange between suppliers and demanders hides this centralisation because it ignores a great deal of what corporations do–production, marketing, logistics, research and supply. This crisis makes it painfully clear that major corporations are not the same as traders in a local market who are primarily involved in competition through pricing. Instead, corporations are large-scale industrial bureaucracies whose engagement with competition is both broader–stretching into the realms of production, research, and marketing–and consequently, as there are much fewer organisations that can compete in all dimensions and at such a scale, much shallower and less cut-throat than is commonly imagined.

Second, the pandemic response shows us that prices do not necessarily function as automatic mechanisms of the economic system, in contrast to how prices are presented in mainstream economic narratives about the market. The narrative paints prices as being decided through an auction where demand can bid up the price. However, the predominant pricing mechanism in the modern economy is posted price, where customers are offered a take it or leave it price and prices are largely predictable on a day-to-day basis (eBay has both methods–an auction system and a “Buy It Now” posted price system–which produce different prices). Moreover, retailers don’t need pricing information to tell them that something is or isn’t in demand, that’s what their stock monitoring system is for–that’s why the UK supermarkets want access to the stock levels of their competitors; it allows them to plan collectively.

However, because of the dominance of the market narrative, some responses to the pandemic have called for price gouging (see also here). Such takes show the sheer degree of belief in the market narrative, as they assume that if price is not restricted the system will naturally solve any and all problems. Promoting price gouging at a time when people are panicking and suffering also highlights the limited viewpoint the market narrative offers of the social world. What is not considered in “leave it to the market” viewpoints is the degree of human suffering that would result, the tensions that such suffering would cause (on top of the economic collapse we are seeing) and the existence of the guillotine as a mechanism of solving societal tensions.

Finally, and most importantly, corporate governance during the pandemic shows us the existence of economic power and corporate autonomy. Consumers are not kings and the major corporation does not sit as a passive receiver of consumer desires. In the above cases, corporations are actively denying people what they wish to purchase because the corporations are logistically constrained. If we extend our thinking slightly, on an everyday basis the logistical challenges that corporations overcome, at the scale that they operate, necessitates that they predict and manage demand rather than respond to it. If we look at the full range of activities that the corporation undertakes we see purchasing as the end point, not the start point, of a long-chain of actions, decisions, and long-term planning. Seeing the economy in this light, we can also better understand the everyday corporate practices that we, as consumers, regularly experience which serve to manage demand–things such as advertising, promotional offers, and clearance sales. These practices make little sense in the consumer-led market narrative.

Instead of the market, then, what the pandemic has revealed is a fragmentarily centralised, highly logistically co-ordinated, and supply-led corporate economic system. This situation shows us that the analogy to an actual physical marketplace in the market narrative about the contemporary economy does not hold empirically. Instead, the “market” is at best a metaphor. Ironically, over the centuries that this metaphor has been applied, physical marketplaces have been replaced by corporate supermarkets.

Dispensing with the market metaphor is essential to being able to see the major corporation, and seeing the major corporation is essential to developing an understanding of the global industrial system, the governing role of this system in our lives, and how this system is producing different crises. Since we are now in a time when governments are tearing up their rulebooks in terms of economic policy–in a time where a previously unthinkable or radical policy can become orthodoxy–the time is ripe to rethink the basic economic language that currently serves to constrain our thinking about, and our capacity to reimagine, the social world. It is time to embrace the use of alternative language, metaphors and ideas that allow us to confront the corporate economy as it is.

Terry Hathaway is a Lecturer at the Norwegian Study Centre at the University of York.