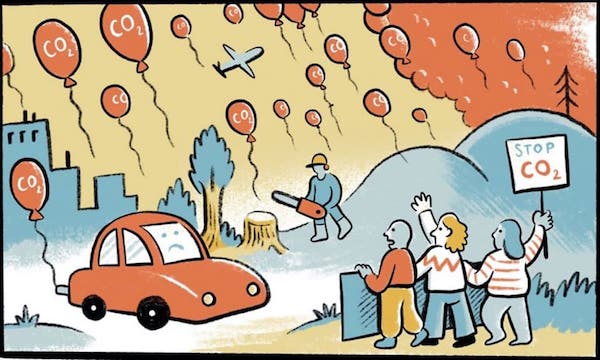 Figure 1. A visual metaphor for each of our personal carbon dioxide emissions — bright balloons that linger in our skies. Image courtesy of Nexus Media. Art by Matteo Farinella, written by Jeremy Deaton. 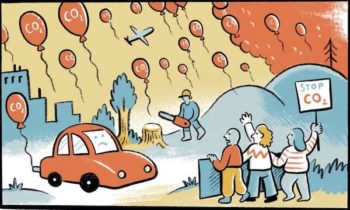 Figure 1. A visual metaphor for each of our personal carbon dioxide emissions—bright balloons that linger in our skies. Image courtesy of Nexus Media. Art by Matteo Farinella, written by Jeremy Deaton.

If you are reading this, you probably already know a lot about climate change. But what images come to mind if I asked you to visualize climate change?

You may think of melting ice caps or forest fires, drowning coastlines or desertification, or maybe even all these things at once. But that makes for a problem, as these are all contradictory images: floods or fires, water or desert.

Consequently, climate change is hard to summarize into a single, compelling image. Climate change is not just one thing, but rather a complex system of interconnected problems—most of which you may have never experienced directly, but only seen over and over in TV footage or newspapers.

That makes for a challenge, when it comes to communicating about climate change: It’s hard for human beings to relate to something that we cannot see. That may be why for far too long, the debate around the climate crisis seems to focus on so-called “beliefs:” those who believed it was coming and those who didn’t.

Of course, to us scientists—who have learned to read the data on carbon emissions and temperature trends—there was an obvious correlation between the rise in average global temperatures and the increase in carbon emissions since the dawn of the industrial revolution. But the vast majority of people cannot see any readily detectable, incremental changes in their everyday lives, and to most of us, seeing is believing. Snow keeps falling in winter, and the sun keeps shining in summer. So, to the public mind there were no real facts to contend with; they feel as if they are expected to believe in what the scientists are telling them.

Speaking as someone who has studied the structure and function of the human brain and nervous system, I suspect that part of the reason for this lies in the origins and evolution of homo sapiens. We are visual animals, who have evolved to react to real enemies when they are right in front of us here and now—not to potential risks and invisible threats.

Unfortunately, as we are currently learning, there are threats that may be too late to confront when they become visible. The only way to avoid them is to plan ahead.

So, how can those of us who communicate about the impacts of science make climate change feel more urgent and real? Maybe we could find new ways to help members of the general people in effect “see” climate change.

Which is where comics come in.

In many countries, comics are still mainly associated with funny stories, more appropriate to children’s entertainment than to a serious issue like climate change. There’s a reason why they were often called the “funny pages” in the American vernacular. And yet, from Superman to Maus, comics have proven over and over their ability to engage the public with social and political issues. In recent years, comics have also been used to engage non-expert readers with a whole variety of scientific subjects, from my own field of neuroscience (Neurocomic 2013) to genetics and astrophysics. And yet, climate change remains a largely unexplored subject for comics—especially if compared to the volume of ink spilled on the subject. But I would argue that comics (with superheroes or not) have two unique powers that could make them an ideal tool for climate communication: They make the invisible visible, and tell human stories. Let’s take a look at each one of these features in turn, and consider a few practical examples.

Making the invisible visible. Many authors have remarked that climate change seems to be a problem almost designed to defy human understanding. We are not good at dealing with intangible entities, and in climate change both causes and effects remain mostly invisible in our daily lives. Power plants are kept at a comfortable distance from major cities. Trash is discreetly collected and swiftly taken away from our doorstep.

To make things worse, the effects of climate change are also delayed in time. Even if we stop polluting tomorrow, the temperature of the planet will keep rising for many decades to come—and unfortunately we did not evolve to think of cause-and-effect over such time scales.

But comic panels can compress time and space, making these invisible connections more clear, much like what happens when we look at a scientific diagram. For example, take the 2015 comic The Fragile Framework: Can Nations Unite to Save Earth’s climate?, which was written for the peer-reviewed journal Nature by Richard Monastersky and Nick Sousanis. The comic summarizes some basic facts about climate change and the history of international treaties on climate, but with some clever page designs it also manages to connect the abstract data on global temperature trends with their very real effects on forest fires and desertification. (See Figure 2, below.) 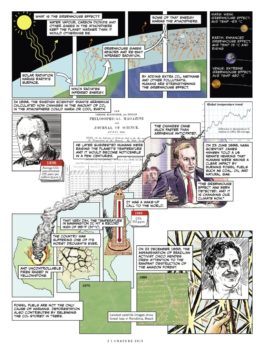 Recently I have been working on a climate comic myself, written by Jeremy Deaton of Nexus Media and published by Popular Science this March. The comic highlights the fact that climate change is now unavoidable, but we still have a choice as to how severe the effects are going to be. Or, as we put it in the comic: “We are in for a rough century. How rough is up to us.” The main challenge was to come up with a good visual metaphor for carbon dioxide emissions.

I wondered: What if our personal emissions could be collected in bright orange balloons that would linger in our skies for years and years? Maybe if we could make carbon dioxide more visible it would help researchers drive home the scale of the problem in a way that people could intuitively understand. (See Figure 1, above.)

This leads me to the second great power of comics: putting people back into the picture.

Telling human stories. By now, the majority of Americans accept that climate change is happening. What is really lacking is not belief but engagement.

Some studies have shown that even when people see climate change happening they still perceive it as psychologically distant. They think it is happening in some faraway country, or in some distant uncertain future. This is partially due to the kind of visuals that have been used to report on climate change. We have all seen the picture of the polar bear stranded on a melting iceberg—but as much as we may like bears, we are hardwired to care about people. We are visual animals, yes, but even more we are social animals, and we care most about our own species.

This is why last year, the picture editor at The Guardian made an explicit choice to use more pictures of how climate change affects people. These may be hard to look at, but they are powerful. Seeing people suffer could make the dangers of climate change more relatable and maybe spark us to take action.

Furthermore, we are not motivated by abstract data about people but stories—and they must be stories about individuals. To paraphrase a familiar quote, “A million deaths are a statistic; a single death is a tragedy.”

Stories about individuals act as a sort of mental simulation. Through the eye of a relatable character we are able to explore new worlds and experience unfamiliar situations. We can put ourselves in someone else’s shoes and ask “What would I do if…”

In climate change stories, as in most scientific stories, it is often hard to find a central character, and a simple linear narrative. Maybe this is why in recent years we have seen an explosion of excellent climate fiction, such as Kim Stanley Robinson’s excellent New York 2140, Paolo Bacigallupi’s The Water Knife, and more—but we still haven’t seen many works of climate graphic fiction. Once again, I think graphic novels could be an excellent way to combine the power of storytelling with the immediacy of visualization.

And such an approach is not limited to science fiction; it can also be applied to science fact. For example, Philippe Squarzoni’s 2014 story Climate Changed tells the personal struggle of the author while he grapples with the disheartening reality of carbon emissions. However, Squarzoni’s more intimate moments are short interludes in long sequences of data visualizations and interviews with climate experts, drawn with almost cinematic precision. Climate Changed ends up being more documentary than storytelling.

In contrast, the webcomic Antarctic Log by Karen Romano Young follows ocean scientists on Antarctic expeditions; with short, colorful “postcards” she transports us into this frozen world. She mixes basic facts about climate change (which is unavoidable in the Antarctic) with animal curiosities and anecdotes of life at sea. Based on real events and entirely factual, the format manages to be educational without being too didactic, and—more important—makes the scientists more relatable in the eyes of non-expert readers. I think this could be crucial in covering climate science, where the perception of scientists as cold and detached from everyday life can often feed into an open distrust of science. (See Figure 3.) 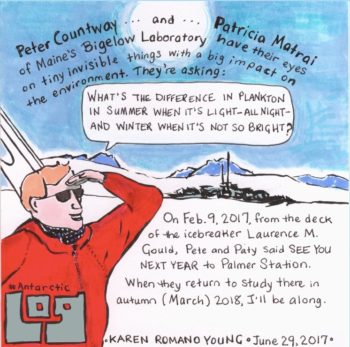 These examples offer only a glimpse of what comics can offer to climate change communication. Cartoonists are masters at summarizing complex information in a few panels and recreating worlds with a few lines. A lot has been written about virtual reality as a tool to create empathy, but I believe comics may be able to achieve similar goals at a much lower budget. Comics can transport readers to far away places or a not-so-distant future, in which climate change has already drastically changed people’s lives. Drawing also offers a level of intimacy and emotional engagement that may be difficult to achieve with words, or inappropriate to capture on film.

Comics are not just an acceptable format to talk about climate change, but may become a powerful tool in any strategy related to communicating about it. To address climate change we will need to work together, across borders and cultural barriers—and climate change comics could be a way to bring more readers, regardless of age, nationality, literacy or language, into the conversation. So the next time you are talking to a climate change denier such as climate scientist Richard Somerville’s apocryphal Uncle Pete, instead of throwing facts at him, maybe bring him some comics. He may be taken by surprise and more likely to listen.

(Editor’s note: All the comics discussed in this article—and many more—can be found at cartoonscience.org)

Matteo Farinella is a neuroscientist turned illustrator and science communicator. He is the author of two graphic novels about the brain (Neurocomic 2013, The Senses 2017) a children’s book, and other comics about science. He works as a scientific multimedia producer at Columbia University’s Zuckerman Institute, and is a regular contributor to Massive Science and Science for the People.