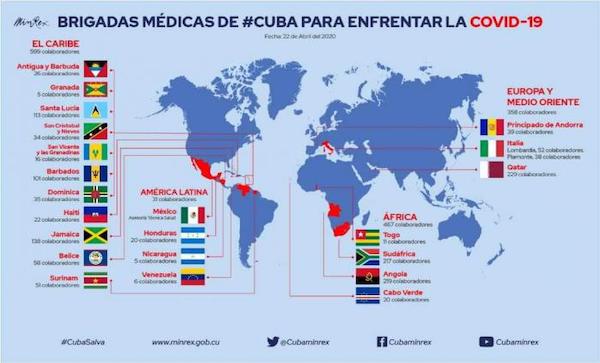 Twenty-two medical brigades from the Henry Reeve Contingent are now confronting the pandemic around the world. Photo: MINREX

A brigade of 217 Cuban health professionals has arrived in South Africa to support the battle against COVID-19 in that country, bringing to 22 the total number of “medical embassies” that have traveled abroad to help save lives.

A total of more than 1,450 men and women in white lab coats from the Henry Reeve Contingent have traveled to 22 nations in Europe, Latin America and the Caribbean, Africa and the Middle East to confront the pandemic.

Cuban Foreign Minister Bruno Rodríguez Parrilla tweeted, “Without neglecting the responsibility to protect our people and despite limitations imposed by the blockade, Cuba offers modest cooperation to other peoples,” adding,

In the face of the COVID-19, the priority of all must be to save lives.

“This is a crisis of multiple and devastating effects not only in the field of health, but also in the economy, international trade and our societies in general,” he continued.

“Homeland is Humanity. Under thismaxim of Martí’s, our health professionals defend medical care, the welfare of the people and life in different corners of the world,” the Foreign Minister stated.

Cuba’s Minister of Public Health, José Ángel Portal, referring to the group in South Africa, said that the attitude of health professionals on these missions is based on the Revolution and our people’s principles of solidarity.

Despite attempts by the U.S. government to discredit Cuban medical collaboration, the COVID-19 crisis has exposed Washington’s slanders. “One day we will tell our children that, after decades of movies and propaganda, at the moment of truth, when humanity needed help at a time when the great powers were in hiding, Cuban doctors began to arrive, without asking anything in return,” stated Rafael Correa, former president of Ecuador.