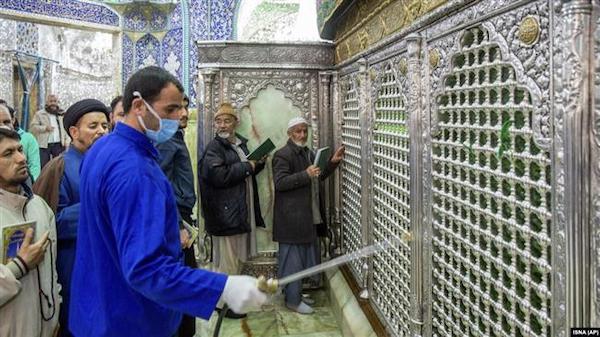 Sanitising the shrine of Hazrat Masoumeh against the coronavirus in the holy city of Qom, Iran, February 25, 2020. File photo

Iran has delivered a devastating blow to the ego of the Trump administration, puncturing it beyond repair, by its announcement Sunday that mosques will start reopening in low-risk areas of the country from May 5.

President Hassan Rouhani said mosques would reopen in 132 regions designated as white under a colour-coded system after being consistently free of the new coronavirus. “Friday prayers will also resume in those areas and the mosques that respect the health protocols,” Rouhani added. The U.S. had to settle for a “virtual” Easter mass, but observant Muslims in Iran will pray during Ramadan in their mosques.

Iran has already lifted a ban on inter-city trips and malls, with large shopping centres resuming activities. Rouhani also disclosed that schools in low-risk areas will be re-opened by May 16 to allow for a month of classes before exams are held.

The Health Ministry in Tehran said Saturday the rate of infections has started a definite downward trend. This has been possible because as many as 78 million people were screened for the COVID-19 symptoms in the first phase of a nationwide program and 30 million in the second phase.

For a country with a population of 84 million, this is an astounding record. In contrast, testing in the U.S. remains scarce, with roughly 5.5 million tests performed since the first confirmed U.S. case on January 20th.

A recent analysis by Harvard researchers and STAT shows that as the U.S. tries to move beyond its months-long coronavirus testing debacle–faulty tests, shortages of tests, and guidelines that excluded many people who should have been tested to mitigate the outbreak–it is at risk of fumbling the next challenge: testing enough people to determine which cities and states can safely reopen and stay open.

Iran is one of the Middle Eastern countries hardest hit by the outbreak. Its crisis was compounded by the fact that Trump administration ensured through a barbaric sanctions regime that Tehran would have to combat the pandemic with one hand tied behind its back from the time its first COVID-19 infection cases appeared in late February.

The Trump administration’s–particularly the evangelist secretary of state Mike Pompeo’s–optimistic assessment was that under the assault of COVID-19, Iran would simply collapse for want of medicines and equipments, hospital beds and ventilators.

But the mother of all ironies is that on Sunday, even as Rouhani as declaring a defining moment in the pandemic in Iran, President Trump revised upward the possible death toll in the U.S. closer to 1,00,000. Over a million Americans have been infected by the virus so far and nearly 70000 lives have been lost.

The corresponding figures in Iran tell a story by itself: Iran has a total of 97,424 cases of the coronavirus. 78,422 patients have recovered and been discharged from hospitals so far. The death toll from the outbreak rose by 47 over the past 24 hours to 6,203, Iran’s lowest in nearly two months.

What emerges out of all this is that the U.S. is an incredibly sloppy country despite its vainglorious claims of being a superpower and is ruled by an utterly incompetent government. To hide the shame and disgrace, Pompeo has plunged into a blame game.

On Sunday, Pompeo said: “There is enormous evidence that that’s where this began,” later adding: “I can tell you that there is a significant amount of evidence that this came from that laboratory in Wuhan.” Pompeo appeared confused. Only last Thursday, he was on record as saying in a radio interview,

This revisionist thesis of the “Wuhan virus” becomes necessary as it emerged by the weekend that the death toll in the U.S. would go up at least by another fifty percent. Pompeo is having to contend with an unprecedented diplomatic disaster on the world arena, as the U.S. stands exposed as a bumbling giant with feet of clay. The world community will rightly wonder how a country that cannot adequately protect its citizens can be a provider of security for other countries.

What Pompeo refuses to acknowledge is that countries in the so-called “Orient” such as Iran could so successfully handle the COVID-19 crisis–with composure, grit and an earthy wisdom–that shows up the U.S. as a decadent power. The countries in Asia, the Middle East and Central Asia are handling the situation so much better with so little resources, while the U.S. is grovelling on the ground, lamenting its misfortune and indulging in blame games.

In a virtual “town hall” meeting on Fox News on Sunday night, President Donald Trump admitted that the coronavirus has proved more devastating than he had expected and the death toll from the ravaging pandemic might reach as high as 100,000 in the US. He pleaded during the two-hour broadcast that although he was warned about the coronavirus in his regular intelligence briefing on Jan. 23, the information was characterised as if “it was not a big deal” and had not been presented in an alarming way that demanded immediate action.

From what Trump said, COVID-19 poses a riddle to his administration. It killed nearly 70000 Americans so far, but in Iraq, the body count is fewer than 100; in Malaysia also around 100; in Bangladesh 182.

Or, take the body count in countries that are in close proximity to China: Taiwan–6; Kazakhstan–27; Kyrgyzstan -10;  Laos–0; Cambodia-0; Myanmar-6; Nepal-0; Thailand-54. The metropolis of New York has been devastated while teeming Asian cities like New Delhi, Mumbai and Kolkata have so far been largely spared.

Would Pompeo have an answer? He is peeved that Beijing has not allowed western scientists to enter Wuhan and conduct research. But that privilege wasn’t extended to Vietnam, either. Maybe, Vietnam can teach the U.S. something here that could have profound implications for how countries respond to the virus.

Vietnam, which shares a border with China and is about 1,200 miles from where the outbreak was first reported in Wuhan, has reported 245 confirmed cases with 95 recoveries and no fatalities. Yes–zero fatalities.

Clearly, Pompeo got it right but for the wrong reasons–this probably has got everything to do with the Chinese Communist Party.

A Vietnamese commentary comes out with a definitive explanation:

The Communist Party of Vietnam has strengthened its anti-pandemic measures by implementing nationwide social distancing rules, such as banning outside gatherings of more than two people while keeping a distance of 6.5 feet, and temporary shutdowns of “non-essential” businesses, including restaurants, entertainment centres and tourist sites…

Unlike the U.S. capitalist class and the Trump administration, the Vietnamese government took early measures to combat the current coronavirus epidemic. Officials began preparing strategies to combat the outbreak immediately after the first cases emerged in China.

This declaration of a national emergency came after the sixth case of coronavirus in the country was reported. In contrast, the Trump administration only declared a national emergency over the global pandemic on March 13, when there were at least 1,920 confirmed cases across 46 states.