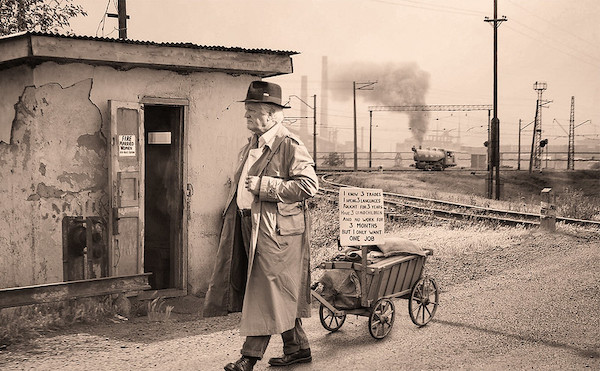 jan saudek Follow Fire Married Women The Great Depression ( 1929 -1938 ) had devastating effects in both rich and poor countries. There were few women in the labor force in 1929, but those that did work were typically found in light manufacturing work. However, across America, because of an acute shortage of this kind of work, there was a widespread popular movement which sought to limit families to one paid job and to reserve all these jobs for men ( thanks to Jeff Wharton for re enactor photo and Shorpy for background photo )

My article What the New Deal Can Teach Us About Winning a Green New Deal is in the latest issue of the journal Class, Race and Corporate Power. As I say in the abstract,

While there are great differences between the crises and political movements and possibilities of the 1930s and now, there are also important lessons that can be learned from the efforts of activists to build mass movements for social transformation during the Great Depression. My aim in this paper is to illuminate the challenges faced and choices made by these activists and draw out some of the relevant lessons for contemporary activists seeking to advance a Green New Deal.

Advocates of a Green New Deal often point to the New Deal and its government programs to demonstrate the possibility of a progressive state-directed process of economic change. I wrote my article to show that the New Deal was a response to growing mass activity that threatened the legitimacy and stability of the existing economic and political order rather than elite good-will, and to examine the movement building process that generated that activity.

Depression-era activists were forced to organize in a period of economic crisis, mass unemployment and desperation, and state intransigence. While they fell short of achieving their goal of social transformation, they did build a movement of the unemployed and spark a wave of militant labor activism that was powerful enough to force state policy-makers to embrace significant, although limited, social reforms, including the creation of programs of public employment and systems of social security and unemployment insurance.

Differences between that time period and this one are shrinking and the lessons we can learn from studying the organizing strategies and tactics of those activists are becoming ever more relevant. The U.S. economy is now in a deep recession, one that will be more devastating than the Great Recession. U.S. GDP shrank at a 4.8 percent annualized rate in the first quarter of this year and will likely contract at a far greater 25 percent annualized rate in the second quarter. While most analysts believe the economy will begin growing again in the third quarter, their predictions are for an overall yearly decline in the 6-8 percent range. As for the years ahead—no one can really say. The Economist, for example, is talking about a 90 percent economy for years after the current lockdown ends. In other words, life will remain hard for most working people for some time.

Not surprisingly, given the size of the economic contraction, unemployment has also exploded. According to the Economic Policy Institute, “In the past six weeks, nearly 28 million, or one in six, workers applied for unemployment insurance benefits across the country.” More than a quarter of the workforce in the following states have filed for benefits: Hawaii, Kentucky, Georgia, Rhode Island, Michigan, and Nevada. And tragically, millions of other workers have been prevented from applying because of outdated state computer systems and punitive regulations as well as overworked employment department staff. Even at its best, the U.S. unemployment system, established in 1935 as part of the New Deal reforms, was problematic, paying too little, for too short a time period, and with too many eligibility restrictions. Now, it is collapsing under the weight of the crisis.

Yet, at the same time, worker organizing and militancy is growing. Payday Report has a strike tracker that has already identified over 150 strikes, walkouts, and sickouts since early March across a range of sectors and industries, including retail, fast food, food processing, warehousing, manufacturing, public sector, health care, and the gig economy. As an Associated Press story points out:

Across the country, the unexpected front-line workers of the pandemic–grocery store workers, Instacart shoppers and Uber drivers, among them–are taking action to protect themselves. Rolling job actions have raced through what’s left of the economy, including Pittsburgh sanitation workers who walked off their jobs in the first weeks of lockdown and dozens of fast-food workers in California who left restaurants last week to perform socially distant protests in their cars.

Rather than defending workers, governments are now becoming directly involved in suppressing their struggles. For example, after meatpacker walkouts closed at least 22 meat plans and threatened the operation of many others, triggered by an alarming rise in the number of workers testing positive for the virus, President Trump signed an executive order requiring companies to remain open and fully staffed. It remains to be seen how workers will respond. In Pennsylvania, the Governor responded to nurse walkouts at nursing homes and long-term care facilities to protest a lack of protective equipment by sending national guard members to replace them.

Activists throughout the country are now creatively exploring ways to support those struggling to survive the loss of employment and those engaged in workplace actions to defend their health and well-being. Many are also seeking ways to weave the many struggles and current expressions of social solidarity together into a mass movement for radical transformation. Despite important differences in political and economic conditions, activists today are increasingly confronting challenges that are similar to ones faced by activists in the 1930s and there is much we can learn from a critical examination of their efforts. My article highlights what I believe are some of the most important lessons.