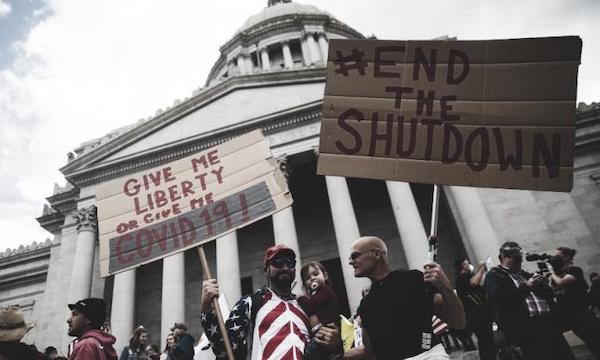 Embrace death. Do it with abandon, with fervour. Cheer on your own death, your parents’, your children’s. Embrace death because, as the world burns, it is the last way to offer fealty to the proper order of things–to there being those at the top and those at the bottom and each in their rightful place. Embrace death because, while some of you at the top might die, many tens of thousands more at the bottom will too. Shake hands on the golf course. Embrace in Number 10. Hug at a White House dinner. Whatever you do, don’t follow your own rules and wear a mask like a schmuck. Don’t worry. Some of you will die, but only some, for now.

Death cult capitalism–now the dominant variety–accepts some losses among the royal caste as an acceptable trade-off for creating a world in which millions of lives are extinguished to lube the system and keep the good stuff rolling in, feeding the insatiable parasites at the top whose lust for short term profits has no end.

Boris Johnston went into ICU. Katie Miller–U.S. vice-president Pence’s press secretary and wife of Trump adviser and general indicator of just how bad human beings can be Stephen Miller–now has COVID-19. Peter Dutton had it. A significant number of his co-thinkers in the Brazilian fascist government led by Jair Bolsonaro are ravaged by the disease.

But a few casualties at the top are not much to worry about. After all, while in Western countries such as the U.S. and UK the virus started as an ailment of the rich and the connected–the international-travel-as-daily-activity set–it quickly spread to those who have neither the means to isolate themselves from the growing pandemic nor the health insurance nor the money nor the underlying good health (a product of wealth and health care access) to protect themselves.

The people dying now are Blacks and Hispanics who can’t escape the crowded neighbourhoods of NYC, health care workers, delivery drivers, farm workers, logistics and transportation workers and all the other people who can’t make the choice to “work from home”. And we know now what the rulers of the most important Anglosphere countries, the supposed defenders of freedom against tyranny, think: let them die.

The Trumpists are increasingly open about this position. “There are going to be deaths no matter what”, Chris Christie, former governor of New Jersey, told CBS. “The American people have gone through significant death before”, he went on.

You need to die for the American way of life. It’s a sick line that U.S. workers have been fed a thousand times before. In this pandemic, more than 80,000 have already died in the U.S. With social distancing restrictions easing, new White House projections, based on Federal Emergency Management Agency estimates, show the country recording 200,000 new cases each day by the end of May–a huge increase from already extraordinary 25,000 daily cases now. According to the modelling, obtained by the New York Times, the number of deaths is expected to increase to 3,000 people per day by June. That is as many deaths as the U.S. suffered on 9/11, every single day.

Yet Trump, and Republican governors across the country, are belligerently moving to end the lockdown and “open up” their economies.

There is a story Marxists who have read history tend to tell themselves–the story of the far-sighted capitalists. The centrepiece of this story is the introduction of the family wage and the construction of the ideology of the family several hundred years ago. English capitalism, in its satanic mills phase, wiped out the traditional peasant family. It forced millions into the cities and put the women and children to work in the same murderous, god-forsaken conditions as the men.

This situation made the fortunes of many early robber-baron capitalists. But it also threatened to destroy the working class as a social entity, thus endangering the whole economic system. So eventually, backed by some important capitalists, the state, acting as what Marx called “the executive committee for managing the affairs of the bourgeoisie”, stepped in.

The result was the reconstitution of the nuclear family, restrictions on child labour and a concerted moral, political and economic effort to construct a pattern of working-class life that could sustainably produce new labour for capital to exploit.

Sounds like not much to hope for. But the 19th century far-sighted English capitalist is to the current U.S. system of wealth hoarding what the lowly Jewish rebel Jesus of Nazareth is to the current paedophile-infested filthy rich Catholic hierarchy. That is, not very analogous.

There are still sections of the corporate media who attempt to paint Donald Trump’s presidency as an anomaly. In the U.S., the “Never Trump” trend among the establishment–epitomised by the farcical New York Times and Washington Post campaigns about “Russian interference”, and sanctimonious think pieces about how Trump is undermining U.S. global credibility–views the Trump presidency as an aberration that could easily be fixed by installing a more credible leader.

But who do these doyens of the most powerful imperial state in world history propose as an alternative? Joe fucking Biden. In coming together at the last minute to crush the Bernie Sanders campaign, the Democratic establishment proved that they still have remarkable institutional weight and cohesion. But the only card they could play to defeat Sanders was a senile buffoon who looks like a visual representation of the smell of death, which illustrates just how decrepit the representatives of the “rational” wing of U.S. capital have become.

The aberration, the fantasy, isn’t Trump. It’s the idea that the U.S. ruling class today is somehow not accurately represented by him. Trump is the personification of modern U.S. capitalism–swimming in fake money, deranged and constantly on the verge of death but never quite there, and entirely in the thrall of his own bullshit. Trump, like the system he presides over, recognises no authority but money and no truth but that which suits him. He has no use for lofty phrases or the codes of conduct and institutions that for so long served to prettify the exercise of power. He recognises, rightly, that they were tools suited to the rise of U.S. power, not staving off its fall.

And Trump’s populism does not mean he is afraid to kill U.S. citizens, on their own soil, Black and Latino, but also white, in their tens of thousands, in the service of money and the market.

When Trump came to power, people (not unreasonably) feared the greatest danger he posed was being completely unhinged, and that he might well start a nuclear war over a Twitter insult. But it has turned out that Trump’s greatest sin has been to serve the god of profit, regardless of the toll in human life. And that doesn’t make him different, it makes him the most American of presidents.