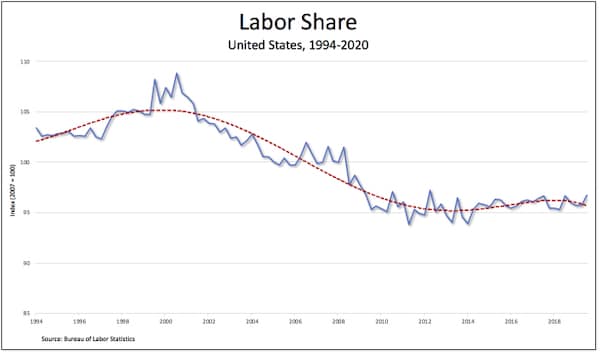 You know things are bad—and going to get worse—when a mainstream newspaper like the Washington Post invokes the Mohr:

What Karl Marx once called “the reserve army of the unemployed” will probably keep wage growth in check as the recovery inches forward.

Despite the inverted commas, Marx never used that exact phrase. He referred to an “industrial reserve army” or “relative surplus population” (in chapter 25 of volume 1 of Capital), which he saw as both a result and a condition of capitalist growth.

The course characteristic of modern industry, viz., a decennial cycle (interrupted by smaller oscillations), of periods of average activity, production at high pressure, crisis and stagnation, depends on the constant formation, the greater or less absorption, and the re-formation of the industrial reserve army or surplus population. In their turn, the varying phases of the industrial cycle recruit the surplus population, and become one of the most energetic agents of its reproduction.

In particular, the existence of a reserve army serves to discipline labor, keeping its wage demands in check, since employed workers are forced to compete with unemployed and underemployed workers for the available jobs.

For my part, I have variously used the terms “reserve army of the unemployed,” “reserve army of the unemployed and underemployed,” and “reserve army unemployed, underemployed, and low-wage workers” to get at much the same issue. And, as is clear from the chart at the top of the post, the reserve army has played its role: since 2000, the index of the labor share of national income in the United States (the blue line, with 2007 equal to 100) has fallen from 108.2 to 96.7. Moreover, the trendline (the red line, which I fitted to the data with a fifth degree polynomial) not only shows a precipitous decline since the turn of the century, but also very little movement during the so-called recovery from the Second Great Depression.

And that’s when the unemployment rate had fallen as low as 3.5 percent (in February of this year). Now it has skyrocketed—to 14.7 percent according to the official rate and at least 24.9 percent according to my own calculations. The tens of millions of new layoffs from the pandemic shutdown have clearly swelled the ranks of the reserve army, as well as the newly impoverished attempting to register for unemployment compensation and waiting in lines outside food banks, in the United States.

We don’t know yet how large the reserve army will actually get, which will depend both on new hires (as some firms continue to operate and even expand or attempt to reopen, to return to making profits) and new layoffs (as other firms go under, either never reopening or being acquired by other firms that have survived).

According to a recent study by Jose Maria Barrero, Nick Bloom, and Steven J. Davis, the COVID-19 shock caused 3 new hires in the near term for every 10 layoffs. However, they also estimate, based on survey evidence and historical evidence of how layoffs relate to recalls, that 42 percent of recent pandemic-induced layoffs will result in permanent job loss.

What that means is the reserve army of unemployed and underemployed workers will continue to increase in the coming months. As a result, I expect the trend of the labor share, which had already started falling prior to the pandemic, to continue to decline.

The way the American economy is currently configured, private employers will only start to hire workers and decrease the reserve army when it is profitable to do so. And workers will be at the mercy of those decisions and, as a result, continue to lose out on an aggregate level to their opposite number, the corporations that alone control hiring decisions.

The folly is now patent of the economic wisdom that preaches to the labourers the accommodation of their number to the requirements of capital. . .The first word of this adaptation is the creation of a relative surplus population, or industrial reserve army. Its last word is the misery of constantly extending strata of the active army of labour, and the dead weight of pauperism.

That would only change in the United States today if the economy were transformed, for example, by a government jobs program (such as the United States implemented during the first Great Depression, with the Works Progress Administration) or by allowing workers to have a say in hiring decisions (either by occupying seats on the boards of directors of existing corporations or by expanding the number of worker-owned enterprises).

Only with such changes would the reserve army be absorbed, the ranks of the newly impoverished decrease, and the trend in the labor share of national income turn around and start to rise.