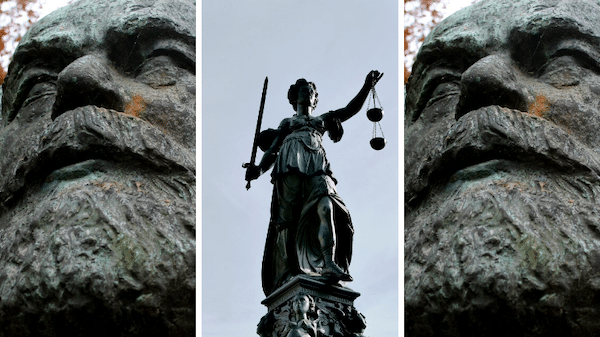 In Revisiting Marx’s Critique of Liberalism: Rethinking Justice, Legality and Rights, Igor Shoikhedbrod deepens conventional understandings of Karl Marx as one of the foremost critics of liberalism, showing how Marx’s work does not simply repudiate liberal ideology from the outside, but rather tests its internal limits, setting it against its own presumptions and ideals. Tracing Marx’s intellectual development and his conceptions of justice and rights, this is an excellent and timely book that makes a persuasive case for including Marx in the canon of the great theorists of liberalism and democracy. 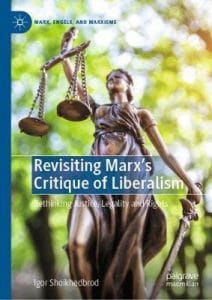 Karl Marx has a reputation for being one of the foremost critics of liberalism and the discourse of rights. In Revisiting Marx’s Critique of Liberalism, political theorist Igor Shoikhedbrod contests this simplistic assumption. His Marx does not hold a dogmatic antipathy to justice and rights. Instead we get a glimpse of Marx as a philosophical pioneer of what is known in critical theory as ‘immanent critique’. This Marx does not simply repudiate liberal ideology from the outside, but rather tests its internal limits, setting it against its own presumptions and ideals, in order to expand our comprehension of it and articulate a wider notion of human emancipation. Shoikhedbrod makes a persuasive case for including Marx in the canon of the great theorists of liberalism and democracy, as a thinker who had something original and profound to say about the dominant political imaginary of modernity.

The book has multiple aims. It is a re-reading of Marx’s theory of law and justice. Shoikhedbrod wants to move from the dominant opinion that Marx dismissed law and justice as such. Through this re-reading, Shoikhedbrod also aims to re-construct a Marxist theory of law that is closer to Marx’s own intellectual development. In other words, he wants to assemble a Marxist theory of law that can address the deficiencies of common interpretations, chief among them being that of the Russian legal theorist Evgeny Pashukanis (1891-1937). Shoikhedbrod also puts forward a radical defence of constitutionalism, the rule of law and democracy, from a Marxist perspective, as a necessary site of social struggles against ‘global financialised neo-liberalism’ and state authoritarianism. In so doing, he demonstrates the relevance of Marx’s immanent critique of liberalism to contemporary debates in political theory. Finally, he defends a notion of post-capitalist, communist legality against critics who imagine that a post-capitalist society will abandon institutional law as such.

The first part of the book is where Shoikhedbrod lays out his re-reading of Marx’s comments on liberalism and law, which are scattered across many different texts. Shoikhedbrod is evidently sensitive to the role of biography in the formation of political philosophy, and therefore he traces Marx’s intellectual development from a young radical democratic/republican in a fierce battle with the Prussian state to an exiled revolutionary. In the first stage of his development, Marx differentiated between rational law and positive law, justice and law, ‘Recht’ and ‘Gesetz’. This allowed him, in his early journalistic writings, to criticise laws from the ideal standpoint of a universalised, substantive concept of equality. In this period, we see a young German radical concerned with the erosion of civil and political liberties, and the legislative battles at the heart of the rise of industrial capitalism. Later, especially as his confrontation with Prussian authoritarianism escalated, Marx realised that it is not enough to simply contrast ideal (rational) against positive (existing) law. He recognised that those ideal standards are themselves an expression of a deficient legal form that conceals social inequalities. Marx reached his political maturity with his formulation of a materialist theory of law and society. His model sees legal form as a central component and expression of the underlying mode of production. In this stage, bourgeois right, especially private right, is essential to the structure of capitalist society as such. Marx replaced legal-democratic critique with historical analysis, demonstrating that every legal form expresses a certain property relation that defines an epoch. This does not mean that Marx abandoned his earlier view of the importance of political emancipation (such as freedom of the press, freedom of association and universal suffrage). Rather, he sought to radicalise political emancipation beyond its limits towards a more substantive social notion of freedom. Therefore, Shoikhedbrod criticises the tradition of legal scholarship that took Marx as outright dismissing legality and right.

The second part of the book engages with the most important theorists of liberalism and democracy in contemporary political philosophy: namely, John Rawls, Jürgen Habermas, Axel Honneth and Nancy Fraser. What those authors share, in Shoikhedbrod’s view, is the assumption that Marxism is a doctrine hostile to rights. In fact, it could be argued that the reconstruction of liberalism led by Rawls and Habermas was driven by the need to save modern political philosophy from Marxist denigration. However, as Shoikhedbrod makes clear, especially in the cases of Rawls, Habermas and Honneth, their attempts to provide liberalism with a renewed normative core end up cutting off the resources for any critique of contemporary financial capitalism. The three theorists reproduce a neo-Kantian understanding of right and law, which cannot explain, let alone directly resist, the social and political deficiencies of contemporary capitalism.

However, sometimes it is unclear in the book where the core of Shoikhedbrod’s disagreements with these theorists lies. Is it their neo-Kantianism, their toothless critique of financial capitalism or is it simply for not being Marxists? Shoikhedbrod may need to develop a deeper intellectual history of those authors and their divergent relations to Marx in order to account for their hesitations. Another problem is a certain confusion regarding the place of the ‘market’ in capitalism and post-capitalism. It is unclear to me why Shoikhedbrod too quickly dismisses the value of Rawls’s and Honneth’s defence of some version of market socialism, while he also argues that Habermas is wrong in identifying the market with capitalism (150-59).

Finally, Shoikhedbrod puts forward a Marxist defence of constitutionalism, the rule of law and political democracy. This may sound odd to those who are used to viewing Marx as a dogmatic enemy of democracy, but Shoikhedbrod presents a different view of the rule of law that is also partially inspired by the historian E. P. Thompson. In this view, the rule of law is a partial and limited protection of weaker classes against the arbitrary abuses of the strong. It is a means or a site through which the oppressed could push back at and set limits to capitalist exploitation. This is clear, for example, in the case of Marx’s celebration of proletarian victory in battles over a shorter working day in Capital. Shoikhedbrod reminds leftists of the centrality of reforms for resisting the ravages of capitalism and for strengthening social struggle, and possibly as a utopian foreshadowing of what communist legality could become.

It is here that the contemporary relevance of the book comes to light, as we witness the terrifying rise of authoritarian movements across the world. However, it would have been useful for Shoikhedbrod to expand and elaborate further on how he conceptualises the nature of ‘social struggles’. How can his account renew and transform older debates around reform versus revolution, and the role of political parties and parliamentary elections in social struggle? This would have clarified the political implications of his philosophical arguments. Another obscurity is the way he posits ‘social struggles’ unproblematically, without indicating whether those struggles merely approach legality from the instrumental point of view of their material interest, or whether they play a more normative role in embodying a radical core of citizenship. There is a tension here between an instrumentalist and ideal-normative view of social struggle, which would have also benefitted from engagement with debates in other corners of political theory. I am thinking here of other critics of Marx like Hannah Arendt, Sheldon Wolin and Claude Lefort.

All in all, this is an excellent and timely book. Especially impressive is Shoikhedbrod’s attention to Marx’s biography and formation as a political actor in his own right. Shoikhedbrod restores a radical-democratic Marx who is passionate about political emancipation, who sees the political value of freedoms of expression and association and who actively embodies this impassioned spirit of resistance to state repression.