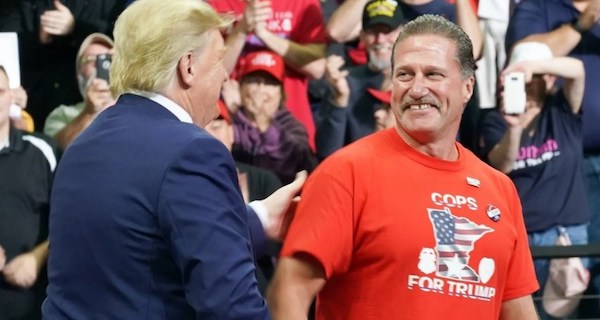 Editor’s note: In light of the police murder of George Floyd by a Minneapolis police officer, The Grayzone is republishing this June 3, 2016 report from our archives by Sarah Lazare. The report details a long history of racist brutality by the Minneapolis Police Department and the presence of a “white power” biker club within its ranks. Minneapolis Police Officer’s Federation leader Lt. Bob Kroll is one among many members of the club, called City Heat.

Following the videotaped killing of Floyd, Kroll–who has been implicated in a long string of violent abuses and publicly endorsed Donald Trump–stated, “Now is not the time rush to judgement and immediately condemn our officers.”

The head of the Minneapolis Police Officer’s Federation has claimed that activists from the city’s Black Lives Matter movement comprises a “terrorist organization.” But a closer look at Lieutenant Bob Kroll’s record indicates that he is the one who poses a danger to the public, with a past marred in accusations of racist violence and attitudes, including charges from fellow police officers that he once wore a “white power” badge on his motorcycle jacket.

Kroll’s outrageous statement about local civil rights protesters is part of a wider of pattern of incorporating war on terror-style rhetoric to demonize local African-American activists and politicians, even comparing them to the Islamic extremists who attacked the U.S. Consulate in Benghazi, Libya. Such devices have also been routinely used across the country to criminalize Muslim-American communities, which face arbitrary surveillance, profiling and entrapment at the hands of law enforcement authorities.

Speaking at a press conference on Wednesday, Kroll described Black Lives Matter as a band of terrorists. He made the remarks in reference to public outrage and protest over white police officers’ killing of unarmed 24-year-old African-American man Jamar Clark on November 15, 2015. Clark was shot by police in the head while, according to several witnesses, he was handcuffed. The Department of Justice announcement on Wednesday that it will not bring civil rights charges against the officers involved, Mark Ringgenberg and Dustin Schwarze.

For the community members who have organized ongoing demonstration including a weeks-long occupation outside the fourth precinct last year before they were violently evicted by police, the Justice Department’s announcement was a painful one. But what came next from Kroll, they said, is downright dangerous.

Kroll exploited the Justice Department’s decision on Wednesday to blame Clark—who is not alive to defend himself—for his own killing. He stated: “Jamar Clark dictated the circumstances that night.” Kroll then trashed the “Justice for Jamar” movement, declaring: “I don’t see Black Lives Matter as a voice for the black community in Minneapolis.” Finally, he smeared the protesters as terrorists and implied they caused damage to the precinct and police officers’ property.

“His claims are patently false,” Nekima Levy-Pounds, president of the NAACP and civil rights attorney, told The Grayzone.

It is disturbing that someone representing the rank-and-file of police would make an outrageous statement that perpetuates fear and division.

Going further, Levy-Pounds said that Kroll’s remarks “could put people at risk of facing violence and retaliation at the hands of white supremacists and those who despise the Black Lives Matter movement.”

And in February, a St. Paul police officer Jeff Rothecker was forced to resign after he was caught encouraging drivers to run over Black Lives Matter protesters slated to gather for a Martin Luther King Day mobilization. In comments posted to Facebook, which were later deleted, Rothecker stated,

Run them over. Keep traffic flowing and don’t slow down for any of these idiots who try and block the streets.

Wednesday’s press conference was not the first time Kroll has issued inflammatory statements against the Black Lives Matter protesters. Last year he told a local media outlet that the protests were “like the local version of Benghazi.” He declared,

In contrast to Kroll’s characterizations, Levy-Pounds said the protests and occupation “symbolized Dr. Martin Luther King’s vision of the beloved community. We had folks from different backgrounds coming together, we supplied food and hot meals, clothes, firewood, coats. It was a place of love and peace and hope.”

“A history of discriminatory attitudes and conduct”

Kroll appears to have a penchant for levying baseless smears of terrorism. Witnesses say that, in 2007, Kroll called Keith Ellison—an African-American and then the only Muslim in the U.S. House of Representatives—a “terrorist.” The accusation forced then MPD Chief Tim Dolan to send a letter to the entire police department apologizing. “The alleged comments, if they in fact occurred, are unacceptable,” the chief reportedly wrote.

[C]alling Representative Keith Ellison a terrorist is a prejudicial statement.

In 2007, five African American police officers filed a racial discrimination lawsuit against the city, police department department and police chief in which Kroll’s comments about Keith Ellison and his assorted hijinx were cited. The officers testified that Kroll “has a history of discriminatory attitudes and conduct” and said that he “wears a motorcycle jacket with a ‘white Power’ badge sewn onto it.”

A 2009 article in Pioneer Press mentions that Bob Kroll was a member of City Heat, a motorcycle organization with ties to white nationalism that was repeatedly referenced as a racist institution in the African-American police officers’ lawsuit. In the article, Kroll appeared to defend the organization, which includes numerous police officers in its membership, and dismiss allegations of racism. “If there were any merit to the lawsuit, it would be able to stand on its own without the far-reaching stretch to an off-duty motorcycle club,” he said.

Ever hear the phrase ‘throw a lot against a wall and hope something sticks?’

Even the Anti-Defamation League, which collaborates with police departments across the country and has been known to attack progressive organizations, raised the alarm about City Heat in a report entitled “Bigots on Bikes.” The ADL wrote:

[T]he City Heat Motorcycle Club, an off-duty police motorcycle club with chapters in Chicago and Minneapolis, has members who have openly displayed white supremacist symbols. Photographs of City Heat members taken by other club members and posted to the Internet have shown that some members of the club display a number of symbols on their clothing that have white supremacist or hateful connotations. One member sports a patch that asks “Are you here for the hanging?”—a reference to lynching. The lynching theme is corroborated by a small chain noose the individual wears next to the patch. Another City Heat member displays the most common Ku Klux Klan symbol, the so-called “Blood Drop Cross.” Several members wear “Proud to be white” patches, an item typically worn by white supremacists.

Kroll did not return The Grayzone’s request for confirmation that he is still part of City Heat. John A. Elder of the Public Information Office of the Minneapolis Police Department, said he has “no idea if Kroll is part of City Heat or not” and did not respond to repeated requests for comment on Kroll’s declaration that BLM is a terrorist organization. City Heat’s website indicates that the organization is active in Minneapolis, but the group did not respond to a request to confirm Kroll’s membership. Kroll, meanwhile, has not publicly denied his involvement in the white supremacist-linked organization.

Our feeling with Bob Kroll is that nothing he says is credible due to his ties with City Heat.

Perhaps the most telling aspect of Kroll’s record is how he treats the public, and particularly people of color. Frustrated with media outlets’ failure to report on Kroll’s troubling history, organizers with the Twin Cities General Defense Committee Local 14 compiled a fact sheet on Kroll’s track record, outlining his lengthy history of suspensions, lawsuits and accusations of racist attacks.

As far back as 1995, Kroll was accused of beating and kicking the groin a 15-year-old child of mixed race while hurling racial slurs. (He was eventually cleared by a federal jury). In 2002, Kroll was involved in a brutal raid on the home of a Native-American family which resulted in a lawsuit that the city settled for $60,000. “The residents alleged that he was among a dozen officers who beat and humiliated them throughout the course of a three-hour search, which included grabbing a pregnant woman out of the shower,” wrote City Pages reporter Susan Du.

Kroll has also been accused of verbally threatening a city council member, and physically assaulting a man at an annual art fair in 2004 alongside a fellow police officer.

These are just a portion of of the lawsuits and accusations that have marred Kroll’s past, yet the officer has evaded serious consequences. According to Libor Jany of the Minneapolis Star Tribune, as of last year Kroll’s records showed that he has faced at least “19 other internal-affairs complaints during his 26 years on the force, all but three of which were closed without discipline. He has been reprimanded once in recent years, and he also was suspended after being accused of using excessive force, records show.”

Kroll is hardly alone in employing war on terror-style rhetoric to appears to demonize Black Lives Matter. Last year, New York Police Department Commissioner William Bratton—one of the most powerful law enforcement officials in the country—compared Black Lives Matter protesters to terrorists and announced a new heavily armed “Strategic Response Group” to “assist us in dealing with demonstrations.” Meanwhile, Black Lives Matter protesters have been preemptively spied on by both the law enforcement and the FBI, from New York to Minnesota, and during the militarized show of force in Ferguson.

“Since 9/11, all manner of legitimate protests have been characterized by law enforcement of all stripes as acts of terrorism,” Vince Warren, executive director of the Center for Constitutional Rights, told The Grayzone.

The police union is attempting to play the one card they have left, which is the fear card.

Sarah Lazare is web editor at In These Times and a former writer for The Grayzone at Alternet.