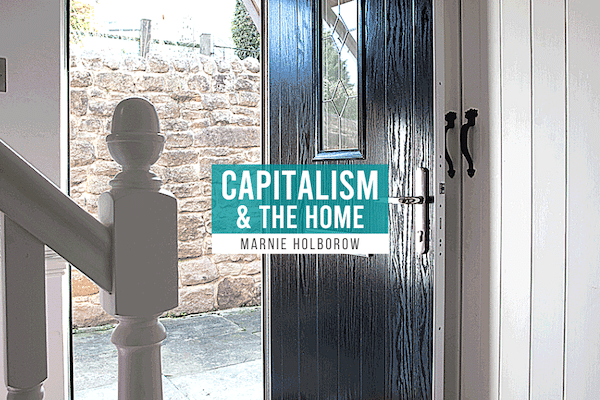 Capitalism and the home

We have become used to ‘stay at home’ in the corner of our TV screens, behind nightly government press conferences, repeated over and over on the radio and in social media.

And while staying at home is the obvious logic of staying safe against the onslaught of this pandemic, it also relies on some accepted social assumptions which are unraveling in the crisis.

‘Home’ is wrapped in a hundred myths: it is comforting, protective, yours and your family’s own, the fulfillment of your personal life. Some of these may be true, for some people, some of the time.

But under capitalism, home has become an expensive commodity, beyond many people’s reach. Over the last ten years, the number of homeless people has increased dramatically. Last year it was reckoned that at least 700,000 people were sleeping rough or in emergency/temporary accommodation , on one night, in the European Union–an increase of 70% compared to ten years ago.

Many young people, even into their thirties, cannot afford to move out of their parents’ home because of low pay and high rents. Now adults, not just children, are sharing the family home which is not without frustrations and tensions.

Home is not universal; it is experienced very differently–in terms of size, facilities, and space–depending on your social class. COVID-19, and the issues of homeschooling, has shown just how huge that inequality gap is.

Nor is it an undifferentiated, desirable haven. Home can be a violent, fearful place, as the 30% increase in domestic violence during the pandemic has shown. Because of the housing shortage, few have the choice to leave. Scarcity of alternatives, and of women’s refuges, means that for many there is simply nowhere else to go.

The dominant narrative is that home is the ultimate in individual lifestyle and choice. In reality, home has strikingly uniform patterns and functions. In the thousands of individual homes across any one country, on any one day, cooking, washing, cleaning, childcare, repairing, and upkeep, is going on and often at the same times.

The pandemic has piled more work into individual homes.

This is not even to consider that people are now working from home. The current Fine Gael/Fianna Fáil draft programme for government mandates public sector employers and colleges to move to 20% home and remote working in 2021. While home working can be more convenient for some, it can create new pressures for others. Working from home in a cramped space can be difficult: it can make work more prone to targets pressures, more individualised and, without the social interaction of work, more atomized.

With schools closed, childcare has rebounded back on to parents to cope with entirely at home.

The Coronavirus crisis has shone a spotlight on the social role of home. And society comes off very badly.

Even in normal times, home is where most childcare takes place. A recent study from NERI has shown that in the Republic of Ireland, 50% of childcare is undertaken by the family, as compared to nurseries (20%), out of school facilities (18%), or childminders/school (both 4%).

In Northern Ireland 50% of childcare is done by a family or friend, 34% with a childminder and 25% with a creche or playgroup.

This is the case even though the number of women entering the workforce has soared. Childcare as an issue has moved centre stage during the pandemic partly because the vast majority of essential workers are women.

Capitalism is dependent on care in the home for it allows the system to smoothly tick over.

Crucially, it ensures that there is a constant supply of workers for production and for services. Capital would not be able to accumulate profits without a constant supply of people available to work; this is what enables capital to make profit. And that supply of workers comes from individual households, supplemented by other things like education, healthcare, and various forms of welfare. What is different about home care is that it is provided for free.

Home is interlocked with the wage system. Wage and salary levels reflect skills and what is needed on the labour market. But they also fluctuate around gradations of what someone needs to pay for–rent, or a mortgage, bills, food, some leisure etc.

As recent times have shown, workers’ pay has fallen back, and no longer covers the basics. But wages and salaries are understood as determined, not by the inherent social value of what the worker creates or contributes, but by the fact that the employer has complete social control to fix the price of labour goes to the heart of capitalist exploitation.

In Marxist language, the value of labour power is what its reproduction costs but this is only a part of the work carried out during the working day, the rest of which is appropriated by the employer as surplus value. Home does the social reproduction of labour power.

Unpaid labour in the home is not just an added extra. It is a functioning part of the work system of capitalism, which through providing a constant stream of fit, healthy, socialized workers assures its continuation.

In capitalism, care work in the home goes mainly unrewarded and unrecognized. Its role is hidden under the appearance of a private unit.

Some propose that one way of doing this is to demand wages for staying at home. For example, the Italian American feminist, Sylvia Frederici, argues that wages for housework can politically transform women’s lives and the social power of women. Her claim is that unpaid labour in the home is a new ground of exploitation in its own right.

But this is the wrong focus. The way society relies on individualized care in the home has to be understood as a functioning part of the capitalist system as a whole. It is capital that reaps the rewards of mainly women’s unpaid work in the home. It has been reckoned that women in Ireland put in 38 million hours of unpaid care work every week, adding at least €24 billion of value to the Irish economy every year.

Further, most women want paid work, but they want childcare too. Rather than paying women to stay at home, we need to put our energies into winning full state funding for services in the communities–childcare, community and elderly drop in centres–to ease the strain of having to provide it on an individual basis.

In Ireland, we have among the highest childcare costs in the world. Parents pay around 28% of earnings on childcare whereas the EU average is 12%. The Fine Gael/Fianna Fáil government introduced changes to the National Childcare Scheme, but this relies on the principle of subsidies to parents which prop up private provision.

Tax credits and subsidies for private creches are not the answer: we need a public childcare system, accessible to all, so that after the COVID-19 crisis and when it is safe, all parents can return to their jobs.

While capitalism needs free care in the home it also needs more women workers. In Northern Ireland the 2018 figures for women working is 66.7%; female participation rates fall for women with young children but women are most likely to be in paid work during the ages of 35-49 years.

In the Republic of Ireland, more than 77% of women participated in the workforce in 2018. This is up from 72% in the decade since 2009, but hugely up from before the Celtic Tiger. And as the Debenhams’ workers in Dublin and round the country have shown magnificently, they are not going to go back home quietly.

Being in paid work has radically changed how women see themselves, as the recent Repeal movement showed. During the COVID-19 crisis, we have seen that ‘essential workers’ are overwhelmingly women. Women’s right to work with equal conditions and pay is a vital part of the struggle for women’s liberation.

In the decades of neoliberalism, states stripped back the welfare state and privatised services leaving individual households to fill the gap and provide the care. The EU has paid lip service to gender and parental equality, but has avoided calling for universal access to childcare or to care for the elderly through full state provision because this does not comply with its fiscal policy of state spending limits.

The driving force of free market for-profit principles have led to what critical theorist Nancy Fraser calls a crisis of care across western societies. Capitalism, despite drawing ever larger numbers of women into paid work, has proved itself incapable of delivering even the basic public services that broader female participation in the labour force requires. This contradiction produces a social dynamic that challenges the legitimacy of the system itself.

Today the Irish working class is much more female than before. Women are in a stronger position to fight for the public provision of all social care, including childcare. The COVID-19 crisis has been a watershed moment. We cannot let ‘home’ continue to pick up the care tab that society won’t.