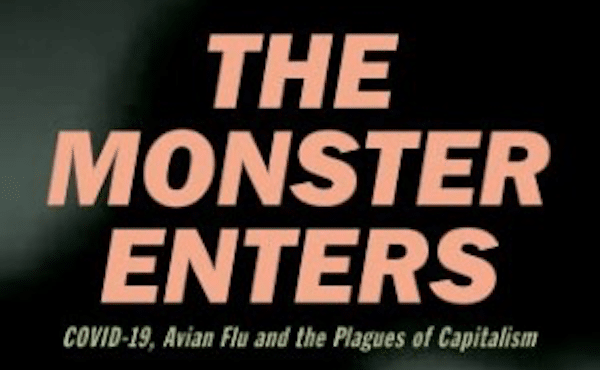 Mike Davis must be feeling like a modern-day Cassandra. In 2005, he warned in The Monster at our Door that we were slouching towards a major flu pandemic, against which public-health systems around the world were unprepared and ill-equipped. In the 2007 revised edition, he reported a poll of medical experts at Carnegie Mellon University that put the chances of the U.S. having sufficient stockpiles of vaccine or antivirals to deal with a pandemic at less than 1%.

Now the foretold pandemic is here, and the fact that it is a coronavirus rather than avian flu makes Davis and others no less prescient. His misgivings that the U.S. government, like the UK government, were going to continue to fail to prepare have certainly proved all too correct. As Davis says in The Monster Enters:

‘Nothing I think better symbolizes state failure than the fact that on the same day that Trump was making his usual boasts about the country’s unparalleled scientific and technological might, the New York Times devoted a full page to “how to sew your own mask”’(p.30).

This is not simply a matter of government ineptitude, although that is clearly a factor, nor is it only that politicians elected to serve the capitalist class will defend profits where possible, even if it puts workers’ lives at risk. As Davis shows, a large part of the reason why we are so unprepared for COVID-19, just as for avian flu, is simply that the pharmaceutical industry is a for-profit industry. Coronaviruses, like flu viruses, are not the easiest of viruses to vaccinate against, but it is not that no one was prepared to try. Davis reports that scientists in Texas, for example, tried to work on a vaccine for SARS and then MERS, (both coronaviruses) but were unable to get anyone to fund them.

The reason for this is that vaccine development is not particularly lucrative. As a general rule, in pharmaceuticals the big money is in drugs for chronic conditions prevalent in the developed world. Drugs which control but do not eliminate conditions are perfect, as the patient has to keep on taking them. Curing diseases, or preventing them through vaccination, in contrast, gives you one-time rather than repeat customers and no guarantee of a continuing market. Developing a vaccine against a pandemic that may or may not happen is even less appetising from the point of view of a pharmaceutical company’s bottom line. As a report by the Council of Economic Advisors warned in 2018, there is a ‘key misalignment between the social and private returns from medical research’. In other words, the social value of effective vaccines is much higher than the private returns to the companies which make them (p.22).

These issues also mean that companies that do produce vaccines can be reluctant to invest in developing new vaccines or updating vaccine production methods. There are also commercial barriers, in that many of the cell lines needed for modernising vaccine production are controlled by private companies. Vaccine development is a casualty of the privatisation of health systems. When it is conducted for profit, this sort of research work is simply not going to be profitable enough.

Similar factors lie behind the collapse of global public health, which Davis points out has prioritised cost-containment at the expense of saving lives. As Richard Horton, editor of The Lancet, says, ‘the U.S. public-health system has been slowly and quietly falling apart’ (p.144).In the UK, as Allyson Pollock has pointed out, decades of cuts and privatisation by stealth have limited the ability of regional health authorities to carry out the testing and contact tracing work necessary for any hope of containing COVID-19.

Neoliberal capitalism is not just implicated in the disastrous response to COVID-19 in both the UK and the US. As Davis demonstrated in The Monster at our Door and amplifies here in The Monster Enters, it is also a large part of why we are facing this pandemic in the first place. Coronaviruses themselves are not new, and many cause only mild disease in humans. Around 20% of colds are caused by coronaviruses, the rest being rhinoviruses. It appears that they are endemic in bats and deadly outbreaks like SARS, MERS and now COVID-19 occur when they jump from bats to an intermediary species and then to humans. MERS, for example, came from Egyptian tomb bats via dromedary camels. There is speculation that COVID-19 comes to us via pangolins, although this is not yet proven.

Pangolins are the most trafficked animal in the world and were for sale in the Wuhan market at the centre of the early COVID-19 outbreak. (It isn’t yet known whether or not the Wuhan market was actually the origin of COVID-19 or just an early cluster.) This gives rise to a strain of argument which blames people and cultures eating ‘exotic’ animals for the pandemic. Like the theory that HIV arose from individuals hunting and eating bushmeat in the form of monkeys and apes, to which Davis refers here, this argument sees the cause of the pandemic as uncivilised people eating uncivilised things.

Bushmeat theories of disease origin can sometimes feel like a default solution when no other palatable explanation presents itself. If you have ruled out all other possibilities, then what remains, however unlikely, must be bushmeat. This can enable bushmeat theories to become the orthodoxy, despite pesky inconsistencies, like the fact for example that the chimp SIV most closely related to HIV-1 comes from a sub-species which does not live in the area where HIV-1 first appeared. To be fair to Davis, while he appears broadly accepting of a bushmeat explanation for COVID-19, he does at least attempt to put consumption of wild animals across the world into a systematic context. He points out, for example, that increases in bushmeat consumption in west Africa have been driven by logging and by Western trawlers driving out smaller fishing boats, therefore reducing the availability of the fish which used to provide the bulk of the protein in local diets.

While West Africa is of course not the origin of COVID-19, Davis’ comments on logging here do highlight an important factor in both coronaviruses and flu: the increasing encroachment into habitats which were previously free from development. Deforestation has certainly brought us into contact with bat diseases before. Ebola is also endemic in bats, and the first known outbreak, in Yambuku in 1976, was associated with rainforest clearance which had driven bats to roost in a cotton factory. Nipah, a fatal disease with recent outbreaks in Malaysia, Singapore and Bangladesh, is similarly a bat virus which spread to pigs and humans when the bats were driven out of their forest homes by logging.

In this sense, the most obvious historical comparison to COVID-19 may not be the 1665 plague outbreak, the subject of Daniel Defoe’s Journal of a Plague Year, to which Davis refers, but the Sweat. The Sweat is a still enigmatic epidemic disease which emerged in England in 1485 and came back for repeated epidemics throughout the sixteenth century. There are theories that it was a form of hantavirus, but there are also others that it was a tick-borne virus, reaching humans for the first time as a result of logging in virgin forest along the English/Welsh border. Deforestation has never been without epidemiological consequences and this history underlines the dangers of unbridled commercial logging and deforestation.

This is not to say, of course, that markets packed with live animals from different species are a prudent practice, nor that they do not raise animal-welfare concerns. China’s banning of the sale of various exotic animals in markets is welcome, if overdue. It is important to recognise, however, that blaming individuals for trading in or consuming exotic animals has the potential to feed a racist narrative of the pandemic. It also lets agribusiness and industrial livestock farming off the hook.

Global livestock conglomerates are often at pains to blame the little people for diseases transmitted from domesticated animals. Charoan Pokphand, a powerful agricultural export corporation from Thailand, said that ‘small producers and their “backward” open-air chicken flocks’ were the source of avian flu, rather than its own industrialised, enclosed farming system (p.126). This of course ignores the fact that this sort of backyard production has been going on, often in fairly densely populated urban settings, for a good 10,000 years. We’re seeing the rise of new, deadly influenza viruses not because of livestock farming and meat-eating per se, but because of the way in which the last forty years have seen livestock farming shift from being based largely in local enterprises to a massive global market.

As Davis himself makes clear, large-scale industrial chicken and pig production creates the precise conditions in which new and deadly strains of flu have emerged. Guangdong, in southern China, is the centre of new flu strains not because its people keep chickens in their backyards, or indeed pangolins in their markets, but because it is one of the global centres of industrial chicken and pig production. As Rob Wallace commented in Big Farms Make Big Flu, if we called flu pandemics by the name of the company that owns the facility where the strain first emerged, it would help us remember who is really responsible.

The conditions which have given us avian flu and swine flu are also perfect for the development of new, virulent coronaviruses. Davis notes that coronaviruses circulate in pigs in industrial lots, and the extraordinary concentration of pigs in these facilities provides opportunities for viruses to recombine and develop new strains. There is no evidence as it stands that COVID-19 came to us from bats via pigs, but as Davis’ account makes clear, if this specific virus is not a direct product of agribusiness, it would not be because agribusiness is proof against pandemics. It would be because this time, unlike the rest of us, they got lucky.