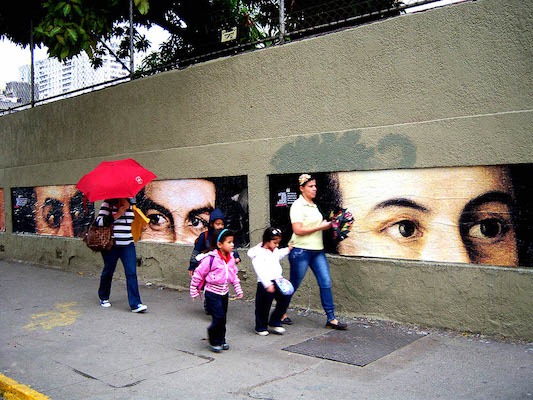 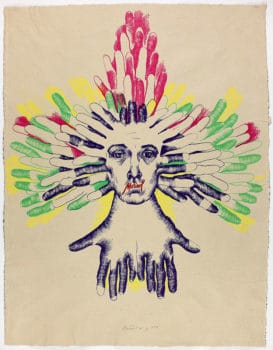 Last year, I walked with Mariela Machado in her housing complex known as Kaikachi in the neighbourhood of La Vega (Caracas, Venezuela). After Hugo Chávez was inaugurated president in 1999, a group of working-class residents of the city saw an empty piece of land and occupied it. Mariela and others went to the government and said, ‘We built this city. We can build our own houses. All we want are machines and materials’. The government supported them, and they built a charming multi-story complex that houses ninety-two families.

Across the road is a middle-class apartment building. Sometimes, Mariela told me, the people from that building throw trash into Kaikachi. ‘They want us to be evicted’, she says. If the Bolivarian governments fall, she points out, a government of the oligarchy will take the side of those residents, evict the families–mainly Afro-Venezuelans–who built the housing development, and hand it over to a landlord. This, she says, is the nature of her struggle, a class struggle to defend the precious gains of the poor against the oligarchy.

Everywhere you go amongst the Venezuelan working class and the urban poor, you are greeted with an effusive identity:

Chavista. This word is used by women and men who are loyal to Chávez, certainly, but also to the Bolivarian Revolution that his election inaugurated. Revolutions are difficult; they must chip away at hundreds of years of inequality; they must erode cultural expectations and build the material foundations for a new society. Revolutions, Lenin wrote, are ‘a long, difficult, and stubborn class struggle, which, after the overthrow of capitalist rule, after the destruction of the bourgeois state…does not disappear…but merely changes its forms and in many respects becomes fiercer’. Hunched shoulders must straighten and aspirations beyond the most basic needs must be met. That was the agenda put on the table by Chávez. Initially, oil revenues provided the resources for these dreams–both within Venezuela and across the Global South–but then oil prices collapsed in 2015, which impacted the ability of the Venezuelan state to deepen revolutionary change. But the revolutionary process did not weaken. 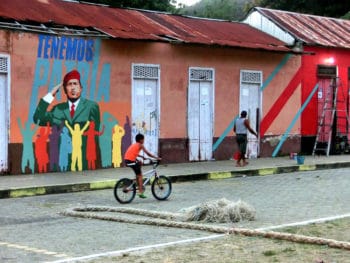 From 1999, the main oil and mining companies tried their best to delegitimise the revolutionary process in Venezuela. They did this not only to access the resources of Venezuela, but also to make sure that the Venezuelan example of resource socialism did not inspire other countries. In 2007, for instance, Peter Munk, the head of Canada’s Barrick Gold, wrote an inflammatory letter to the Financial Times with the title ‘Stop Chavez’ Demagoguery Before it is Too Late’.

Munk compared Chávez to Hitler and Pol Pot, saying that such ‘autocratic demagogues’ should not be permitted to function. What bothered Munk–and executives of mining companies such as him–is that Chávez was carrying out a ‘step-by-step transformation of Venezuela’. What was the nature of this step-by-step transformation? Chávez and the Bolivarian Revolution were taking resources away from the likes of Barrick Gold and diverting their wealth to benefit not only the Venezuelan people, but also the people of Latin America and elsewhere. This resource socialism had to be destroyed.

In 2002, the United States–with funds provided by the National Endowment for Democracy and USAID–attempted a coup d’état against Chávez. This coup failed decisively, but it did not stop the shenanigans. In 2004, U.S. Ambassador William Brownfield produced a five-point plan of the embassy: ‘the strategy’s focus’, he writes, ‘is 1) strengthening democratic [namely oligarchic] institutions; 2) penetrating [meaning to disorient and buy off] Chavez’ political base; 3) dividing Chavismo; 4) protecting vital U.S. business, and 5) isolating Chavez internationally’.

These are the elements of the hybrid war against Venezuela, a war whose tactics range from sanctions to throttling the economy to spreading misinformation and isolating the revolutionary process. Every attempt has been made by the United States government and its allies (including Canada and a number of governments in Latin America) to overthrow not just President Chávez and President Nicolás Maduro, but also the Bolivarian revolution in its entirely. If the U.S. and its allies were to win such a war, there is no doubt that they would erase the Kaikachi housing complex where Mariela Machado is a local leader. 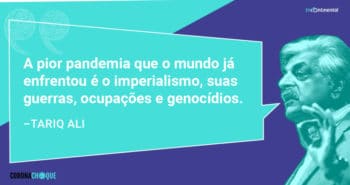 When I met Mariela in 2019, the U.S. had been trying to install Juan Guaidó–an insignificant politician inside of Venezuela up to that point–as the president. It was people like Mariela who took to the streets on a daily basis to resist the attempted coup and hybrid war engineered by Washington, DC, by the transnational corporations, and by Venezuela’s old oligarchy. Chavistas like Mariela understood very well Chávez’s comments from 2005: ‘Goliath is not invincible. That makes it more dangerous, because as it begins to be aware of its weaknesses, it begins to resort to brute force. The assault on Venezuela, utilising brute force, is a sign of weakness, ideological weakness’. What Chávez said then mirrors what Franz Fanon wrote in A Dying Colonialism (1959):

‘What we are really witnessing is the slow but sure agony of the settler mentality’ and the ‘radical mutation’ that the revolutionary process produces in the working class. Chavismo is the name of revolutionary energy, of the radical mutation of the personality of the Venezuelan who is no longer willing to bend before the oligarchy or of Washington, DC, but dignified in the struggle, is unwilling to accept a life of submission. 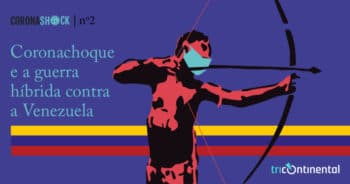 During the period of the global pandemic, a sensitive world would have united to condemn the suffocation of places like Venezuela and Iran, which face a hybrid war from Washington, DC that has diminished their ability to combat the virus. But, instead of ending or even suspending the hybrid war, the United States government–and its Canadian, European, and Latin American allies–increased their attack on Venezuela. This attack ranges from preventing Venezuela from using the International Monetary Fund (IMF) COVID-19 fund to accusing–without evidence–key Venezuelan leaders of narco-trafficking to attempting to invade the country.

Tricontinental: Institute for Social Research worked closely with Ana Maldonado of Frente Francisco de Miranda (Venezuela), Paola Estrada of the International Peoples Assembly, and Zoe PC of Peoples Dispatch to craft CoronaShock study no. 2: CoronaShock and the Hybrid War Against Venezuela (June 2020). The text covers the hybrid war against Venezuela during 2020 and shows how–despite entreaties from the United Nations–the United States persisted in, and even increased, its sanctions policy and military attacks. We urge you to read this booklet, discuss it with your friends and comrades, and circulate it widely. 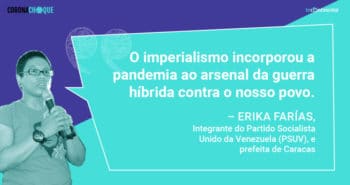 Words such as ‘democracy’ and ‘human rights’ have been emptied of their meaning by the hybrid war. The United States accuses Venezuela of ‘human rights violations’ at the same time as it operates a sanctions policy that is tantamount to a crime against humanity; the U.S.–out of thin air–chooses a man that it anoints as the president of Venezuela in the name of ‘democracy’ without concern for the democratic processes inside Venezuela.

Years before Chávez won his election, the Venezuelan poet Miyó Vestrini wrote about this manipulation of language:

I wonder if human rights really
are an ideology.
Fernando, the only alcoholic bartender who hasn’t retired,
speaks in rhymes:
the night is dark 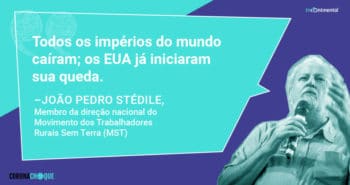 and I don’t have my heart.
As I understand it, he’s one of the few left who
thinks human rights are morals.

Certainly, in Washington, DC, they treat ‘human rights’ as an instrument of war.

Meanwhile, five Iranian oil tankers broke what is effectively a U.S. embargo on Venezuelan trade to bring gasoline into the country. The first tanker,

Fortune, entered on 24 May and the fifth, Carnation, came into port on 1 June. Last year, an Iranian ship, Grace 1, was hijacked in Gibraltar, but this time the United States could not provoke an incident. It helps that China and Russia are supporting Venezuela with resources to assist in the struggle against COVID-19, and it helps that China has made it clear that it will not allow a regime change in Caracas. This is not enough of a shield, however; nothing in our times seems to prevent Washington from conducting a war. 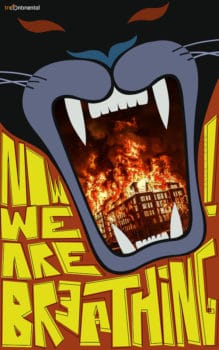 The streets in the U.S. are on fire once more because of the murder of George Floyd, an unarmed black man, by a white police officer and his accomplices in Minneapolis. Malcolm X once said ‘That’s not a chip on my shoulder. That’s your foot on my neck’. A week before George Floyd was murdered, João Pedro Mattos Pinto (age 14) was killed by the police in Rio de Janeiro (Brazil) while playing in the yard of his house; a few days after his murder, Israeli occupation forces murdered Iyad el-Hallak (age 32), who worked in and attended a special needs school in Old Jerusalem. The foot on the neck of George Floyd, João Pedro, and on Iyad el-Hallak is the same foot that suffocates the Venezuelan people, who suffer each day from the U.S.-driven hybrid war.