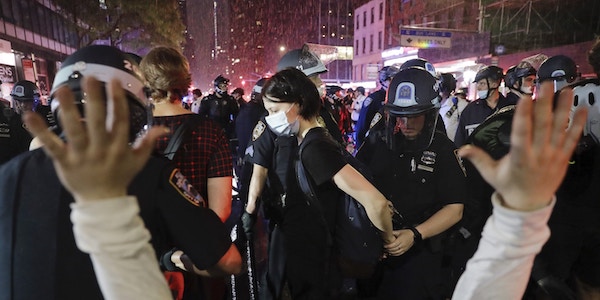 Police in Manhattan on Wednesday arrested protesters who demanded racial justice and an end to police impunity following the killing of George Floyd. Photo: Seth Wenig/AP

THE WHITE HOUSE engaged in an extraordinary act of rumor-mongering on Wednesday, releasing a compilation of viral video clips posted on social media recently by people who believed, wrongly, that the piles of bricks they came across had been planted there by anti-fascist activists, known as Antifa, to inspire violence at protests.

“Antifa and professional anarchists are invading our communities, staging bricks and weapons to instigate violence,” the White House caption for the video claimed.

These are acts of domestic terror.

Within minutes, journalists discovered that most of the clips included in the video posted online by the White House had already been investigated and debunked. A short time later, without explanation or apology, the White House deleted the video from its official Twitter and Facebook feeds–but only after it had been viewed more than a million times.

Although the White House tried to hide the video once it became clear just how riddled with errors it was, The Intercept saved a copy before it disappeared.

The video is worth examining in detail, since it shows just how unconcerned with the truth people in the White House are, as they conduct a frantic search for evidence to support the president’s baseless claim that the protests over racial injustice and police impunity have been hijacked by phantom “professional protesters.”

The compilation includes seven clips showing bricks, rocks or paving stones that the people who filmed them found suspicious. Three of the clips were broadcast a day earlier in a report from “Inside Edition,” which told its viewers that “police say small bands of the so-called ‘professional agitators’ are taking advantage of the crisis and hijacking peaceful demonstrations.”

“Piles of bricks have also appeared at the scenes of major demonstrations,” a reporter for the tabloid news show added.

There is speculation they may have been planted there by Antifa, for use as projectiles aimed at cops and storefront windows.

However, as open-source investigators for BBC News, Buzzfeed and Vice had already reported before the White House compiled the clips, almost all of the video included in it showed ordinary piles of bricks used in construction projects which were underway before the wave of protests began in response to the killing of George Floyd, an unarmed black man, by Minneapolis police officers last week.

In the first clip, recorded in Dallas on Saturday night, a young black protester addresses the camera, and shares the conspiratorial idea that a pallet of bricks outside a courthouse must have been planted there to provoke a riot.

The Dallas protest was a lot of things. But I was very disappointed to see this RANDOM stack of bricks in front of the courthouse. #setup #BlackLivesMatters #makeblackcount pic.twitter.com/CULGXPzMun

“This is a set-up,” the young man says to the camera in the original video, which was posted on Twitter by a black activist. “You got to do better,” the man adds, wagging his finger in a sarcastic scolding of the slipshod provocateurs he imagines were responsible. In the background, another protester can be heard saying, “there ain’t no damned construction around here.”

That is not quite correct, however. Photographs and video shot on May 5 at the same location, outside the Dallas County Courthouse–during a protest by the far-right Oathkeepers in support of Shelley Luther, a salon owner who was jailed for reopening her business during the coronavirus lockdown–showed that there were extensive roadworks and piles of bricks at that same street corner three weeks before George Floyd was killed.

Even if the roadwork had been largely or entirely completed by last Saturday, it seems far more likely that the bricks had just not been cleared away than that they were removed and then planted again, outside a courthouse, by left-wing agitators.

Another clip used by the White House, and “Inside Edition,” shows a pile of bricks in Fayetteville, North Carolina, in video that was posted on Twitter on Saturday. However, as Benjamin Strick of The BBC reported on Tuesday, the bricks were clearly visible at the same spot in video posted on YouTube on May 24, one day before the killing of George Floyd.

Hi @WhiteHouse. You are wrong. Some of these "staging bricks" to "instigate violence" videos are false. This one filmed in #Fayetteville (https://t.co/AqRBp85oeC) the bricks were there pre-May 24 in this video here: https://t.co/gnwqUk7r9u. See more here: https://t.co/pCPB30qxEm https://t.co/BlrAreJ7vE pic.twitter.com/lsgc6R6xX5

The Fayetteville Public Works Commission also confirmed to Strick’s colleague, Shayan Sardarizadeh, on Tuesday that the paving stones had been placed on that sidewalk last week ahead of planned work to restore the cobblestoned street following work on water and sewer lines beneath the pavement.

In the White House compilation, that video from Fayetteville is the fifth clip, and, as Strick pointed out on Twitter, the pile of paving stones in it appears to be identical to those shown in the second clip in the sequence, which seems to show the same stones (surrounded by the same traffic cones and brick wall) at a different time of day.

The third clip in the White House video, of a police officer removing blue boxes of stones from a street corner in Gravesend, a part of South Brooklyn where there have been no protests or rioting, was posted on Twitter on Tuesday morning by someone who claimed, without evidence, that they had been placed there by Anifa. “Bricks have been places strategically around Brooklyn in anticipation of protests,” a conservative Brooklyn resident named Yaakov Kaplan wrote in his video caption without evidence. “ANTIFA is way more organized than politicians pretend.”

That video was shared on Twitter on Wednesday morning by Commissioner Dermot Shea of the New York Police Department. However, Mark Treyger, a New York City Council member who represents that area responded to the commissioner’s tweet a short time later, calling his accusation that the stones had been placed there by antifascists false. “This is in my district. I went to the site. This construction debris was left near a construction site on Ave X in Gravesend,” Treyger wrote on Twitter.

This is in my district. I went to the site. This construction debris was left near a construction site on Ave X in Gravesend. Could be evidence of a developer breaking law since phase 1 hasn’t begun, but there was no evidence of organized looting on X last night that I’m aware of https://t.co/oTEn0wMzAR

It is nor clear where the fourth clip in the White House compilation was shot, but it shows what look like ordinary construction materials.

The sixth clip, of young protesters in Manhattan picking up bricks during a march on Saturday night, was edited by the White House to cut out the start of the scene, in which they could be seen first breaking down a barrier around a clearly defined construction site in the East Village. The original clip, posted by a reporter, showed a yellow fence around the building materials and a sign reading “LANE CLOSED CAUTION,” before it was pulled down by the protesters to get at the bricks.

"Yo, we got bricks. We got bricks!"—#Rioters in Manhattan chanced upon a cache in the street equipped with bricks and a shovel at 10:01 p.m. on Second Ave between St. Marks Pl. and Seventh St. pic.twitter.com/dYB7vHdYqL

The seventh and final clip offered by the White House as supposed proof of Antifa “staging bricks” was perhaps the most embarrassing mistake. That viral clip showed several piles of large rocks inside six metal cages on a sidewalk in Sherman Oaks, California, which people on social platforms speculated were caches of ammunition for future riots.

Wow. All over LA … anyone else seeing these?

Not my video. Just sharing — pic.twitter.com/2TXgwNMdco

In fact, as the Chabad of Sherman Oaks had already explained on its Facebook page on Monday, in response to the viral rumor that these were stones prepared for rioting, the structures were in fact security barriers that had been in place outside the Jewish center for nearly a year.

People keep RTing this like it's prep for looters. That's a hoax. This is in front of Chabad in Sherman Oaks. They're bolted to the cement to keep people from ramming a car into the place of worship & are getting boarded up. Share the shit out of this 2 stop the false narrative. pic.twitter.com/cmgbSnKvQv

A screenshot of a Facebook message posted on Monday, debunking a viral rumor.

“Nevertheless to alleviate people’s concern that they may be vandalized and used by rioters, they were temporarily removed,” the center said in a message posted on Facebook with a photo of the cages after the rocks had been removed.

The White House social media director, Dan Scavino, did not reply to a request for comment on why the video was posted after most of its contents had already been debunked, and why it was removed without explanation.

Despite a lack of evidence, belief in the president’s conspiracy theory that “outside agitators” from Antifa are infiltrating protests to spark violence has become an article of faith among his supporters, and has been echoed from senior officers in some police departments. On Monday, Terence Monahan, the chief of department and the highest-ranked uniformed police officer in the NYPD, told a local television crew that it was time “to get those groups out of here–from California, from all over this country, who are being paid to take this movement, which is a good movement, and turn it into violence” against police officers.

NYPD is being led by a chief, Terence Monahan, who reveals here that he believes the baseless conspiracy theory that groups from other parts of the country "are being paid" to hijack the protests and inflict violence on the police. He's in charge. https://t.co/yVgXzsmPPi

Other departments have found themselves forced to debunk viral rumors of imminent Antifa attacks.

Ahead of a protest on Sunday, the Sioux Falls Chamber of Commerce tweeted that it “had received tips from unnamed sources that protesters from outside of Sioux Falls planned to attend the rally and incite violence.”

Sioux Falls Police Chief Matt Burns told The Argus Leader, a local newspaper, on Monday “that authorities were looking for the buses and didn’t find any evidence of them arriving and unloading protesters.”

But unverified claims that “pallets of bricks” have been mysteriously delivered to protest sites have also been embraced by some anti-Trump activists on the left. The podcaster Tonya Tko used many of the same viral clips of bricks in her own video analysis posted on Facebook on Monday, in which she concluded that the government must be trying to undermine peaceful protests in favor of racial justice by inciting people to violence. Tko’s video, “Bricks Planted in Protest Cities Across the U.S.: IT’S A SET-UP!” in which she also suggests that the COVID-19 pandemic might have been part of a wider government plot, has already been viewed 3.4 million times.

Updated: Thursday, June 4, 1:13 a.m. PDT
This article was updated to note reporting from Benjamin Strick of the BBC that the second and fifth clips in the White House compilation video seem to show the same pile of paving stones in Fayetteville, North Carolina, shot at different times of the day, and to report Tonya Tko’s video analysis.