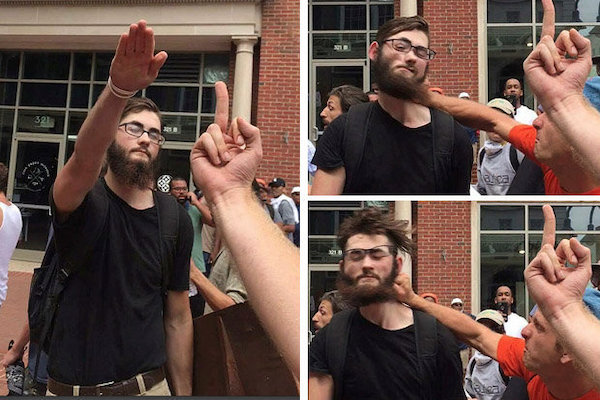 There has been persistent speculation that peaceful protests against racism and police brutality may have been infiltrated by white provocateurs.

The members of this movement have attracted attention.

The police in Las Vegas arrested three white men and charged them with terrorism.

Three Nevada men with ties to a loose movement of right-wing extremists advocating the overthrow of the U.S. government have been arrested on terrorism-related charges in what authorities say was a conspiracy to spark violence during recent protests in Las Vegas.

Federal prosecutors say the three white men with U.S. military experience are accused of conspiring to carry out a plan that began in April in conjunction with protests to reopen businesses closed because of the coronavirus.

More recently, they sought to capitalize on protests over the death of George Floyd, a black man who died in Minneapolis after a white officer pressed his knee into his neck for several minutes even after he stopped moving and pleading for air, prosecutors said.

The three men were arrested Saturday on the way to a protest in downtown Las Vegas after filling gas cans at a parking lot and making Molotov cocktails in glass bottles, according to a copy of the criminal complaint obtained by The Associated Press.

A 25-year-old white man was arrested for arson in Nashville after setting a fire at the city’s historic Courthouse. A white man dressed in black and wearing a gas mask smashed windows in Minneapolis, where he methodically used a hammer to break every window in an Autozone store, then slipped away.

Were they and others part of the so-called “Bougaloo Movement” [aka Boogaloo] of rightwing anarchists?

This is what Wikipedia says about the:

The boogaloo movement, members of which are often referred to as boogaloo boys or boogaloo bois, is a loosely organized American far-right extremist movement.[3][4][5] Members of the boogaloo movement say they are preparing for a coming second American Civil War, which they call the “boogaloo”.[3][6] Members use the term to refer to violent uprisings against the federal government or left-wing political opponents, often anticipated to follow government confiscation of firearms.[1][7]

The movement consists of anti-government and anti-law enforcement groups, as well as white supremacist groups who specifically believe the unrest will be a race war.[3][1][7] Groups in the boogaloo movement primarily organize online (particularly on Facebook), but have appeared at in-person events including the 2020 United States anti-lockdown protests and the May 2020 George Floyd protests, often identified by their attire of Hawaiian shirts and military fatigues.[1][8][9]…

Members of boogaloo groups typically believe in accelerationism, and support any action that will speed impending civil war and eventually the collapse of society.[4][6] According to The Economist, to this end boogaloo group members have supported the “spreading of disinformation and conspiracy theories, attacks on infrastructure (such as that on New York’s 311 line) and lone-wolf terrorism.”[4] Some boogaloo groups are also white supremacist and specifically believe that the “boogaloo” will be a race war,[3][1][7] but there are others that condemn racism.[13] Attempts by some elements of the Boogaloo movement to support anti-racist groups, such as Black Lives Matter, have been met with wariness and skepticism….[14]

Extremism researchers first took notice of the word “boogaloo” being used in the context of the boogaloo movement in 2019, when they observed it being used among fringe groups including militias, gun rights movements, and white supremacist groups.[1] This usage of the term is believed to have originated on the fringe imageboard website 4chan, where it was often accompanied by references to “racewar” and “dotr” (day of the rope, a neo-Nazi reference to a fantasy involving murdering what the posters view to be “race traitors”).[1][6] Researchers from the Network Contagion Research Institute (NCRI) found that the usage of the term “boogaloo” increased by 50% on Facebook and Twitter in the last months of 2019 and into early 2020. They attribute surges in popularity to a viral incident in November 2019, when a military veteran posted content mentioning the boogaloo on Instagram during a standoff with police, and to the December 2019 impeachment of Donald Trump.[1][2] The boogaloo movement experienced a further surge in popularity following the lockdowns that were implemented to try to slow the spread of the COVID-19 pandemic in the United States, and the Tech Transparency Project observed that the boogaloo groups appeared to be encouraged by President Trump’s tweets about “liberating” states under lockdown.[3][7][19]