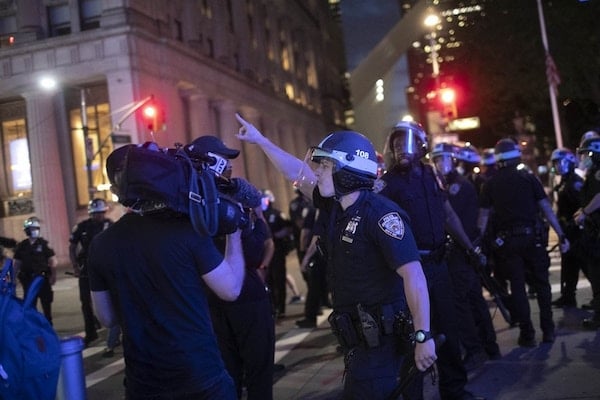 WE ARE WITNESSING a truly unprecedented attack on press freedom in the United States, with journalists are being systematically targeted while covering the nationwide protests over the killing of George Floyd by Minneapolis police.

The scale of the attacks is so large, it can be hard to fathom. At the U.S. Press Freedom Tracker, a project of Freedom of the Press Foundation and the Committee to Protect Journalists, we catalogued 150 press freedom violations in the United States in all of 2019. We are currently investigating 280 from just the last week.

Our data shows this is incorrect. Police are responsible for the vast majority of assaults on journalists: over 80 percent.

At the Tracker, we document violence against journalists from all perpetrators, whether it comes from the police, protesters, or bat-wielding racist vigilantes (yes, that really happened). And the data could not be more clear.

Here is a breakdown of our preliminary numbers, as of the morning of June 4:

As you can see, out of the 180 assaults we are investigating, 149 of them have been by police. That’s almost 83 percent. (This number also does not include police arresting journalists, which have occurred at least another 45 times.)

We further break down the Tracker’s “assaults” category into several subcategories. For our tracking purposes, “assaults” can mean physical attacks, but also tear-gassing, pepper-spraying, or being fired upon with rubber bullets and other projectiles.

Even if you remove all the times police have purposefully fired on and seriously injured journalists with their extremely dangerous “crowd control” weapons, the police have physically assaulted journalists at a greater rate as well. Out of the 67 physical assaults, 42 have been by police. Further, some of the assaults from private citizens have not come from protesters either. For example, WHYY reporter Jon Ehrens was beaten up by what appears to be police-aligned white nationalists in Philadelphia.

MANY OF THE ATTACKS by police have been targeted. There are now literally dozens of videos showing journalists—sometimes live on national television—with cameras, microphones, and press badges, clearly indicating to police they are with the media, only to find officers purposefully firing dangerous projectiles at them anyway.

Listen to this harrowing NPR segment in which multiple journalists—one of them even in tears—describe the terrifying scenarios they have found themselves in as police have turned on them. As Los Angeles Times reporter Molly Hennessy-Fiske puts it, “We were not caught in the crossfire. They pursued us. And they knew that we were reporters and photographers.”

Just last night, journalist Amin Rosen described riding his bicycle and being assaulted by a New York Police Department officer with a baton. The police then stole his bike, refused to identify themselves, and, when Rosen asked how he could get it back, they reportedly responded, “It’s not your bike anymore.” Rosen was wearing a helmet with a large “PRESS” sign on it the whole time.

Btw the clubbing was extremely professional—one swift strike right on the upper deltoid, didn’t hit bone. I can feel about a 3-inch welt forming. Realizing possible second, weaker strike to the left buttock, now that I’m climbing off some stairs…

There’s no doubt there have been several serious physical assaults directed at journalists from a small subset of people attending protests. And private citizens have broken cameras and damaged newsroom facilities as well (14 incidents at the police’s hands, and 26 by others).

At Freedom of the Press Foundation, we forcefully condemn all acts of violence on journalists and urge anyone on the streets to respect their rights. (It should also be noted many protesters have helped journalists to safety as well).

However, when reporting on violence against journalists this fact bears repeating: The police are violently attacking journalists at a rate greater than 4 to 1 when compared with private citizens. Given the out-of-control militarization of police we have seen over the past two decades, and government’s threats to increase its crackdown, that is especially terrifying. And if police departments are not held quickly accountable by state governments, it will only get worse.