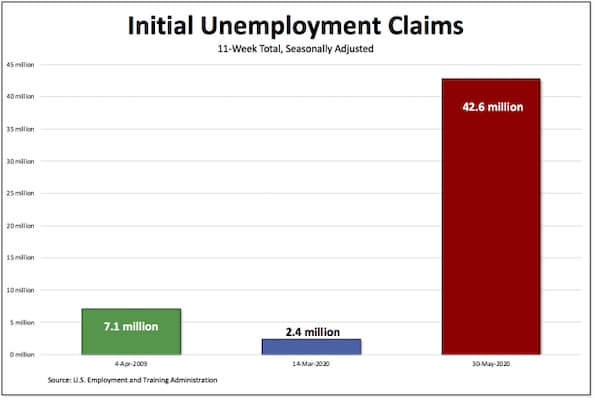 This morning, the U.S. Department of Labor (pdf) reported that, during the week ending last Saturday, another 1.9 million American workers filed initial claims for unemployment compensation. That’s on top of the 40.8 million workers who were laid off during the preceding ten weeks.

All told, 42.65 million American workers have filed initial unemployment claims during the past eleven weeks.

As readers can see in the chart above, the difference is stunning: 6.5 million workers filed initial claims during the worst 11-week period of 2009, 2.19 million from late January to mid-March of this year, and 42.65 million in the past eleven weeks.

Once again, keep in mind, the most recent numbers still don’t include perhaps millions of other American workers, since many states are still addressing backlogs of claims. Masses of workers have been unsuccessful in applying for unemployment insurance because state websites and phone lines are inundated and still, even now, not working correctly.

Moreover, because they’re only initial claims, the numbers also don’t include the 7.1 million American workers who were deemed officially unemployed in early March, before most of the shutdowns started.

According to the most recent report from the Bureau of Labor Statistics (pdf), the number of unemployed workers rose by 15.9 million to 23.1 million in April, leading to an official unemployment rate of 14.7 percent—”the highest rate and the largest over-the-month increase in the history of the series.” But the surveys on which those data are based only capture those who were unemployed in mid-April.

If we allow for the fact that at least some workers have been forced to have the freedom to return to work in recent months, then the total number of fully unemployed workers is something on the order of 36.2 million.* That would mean an unemployment rate of more than 24.1 percent, which is getting closer and closer to the rate last seen in the first Great Depression (25 percent) and almost two and a half times the highest rate (10 percent) suffered during the Second Great Depression.**

On top of that, we should add in the workers who are involuntarily working part-time jobs—in other words, workers who would like to have full-time jobs but have been forced “for economic reasons” to accept fewer hours. The reserve army of unemployed and underemployed workers then rises to more than 48.5 million—or 31 percent of the U.S. labor force.

Moreover, as Patricia Cohen reminds us, millions of unemployed workers are not included in these numbers:

Laid-off workers who have not applied for benefits and those who have left the labor force entirely are not included. Nor are any of the eight million undocumented workers who lost their jobs. They are not eligible for any benefits. Neither are new graduates just entering the labor force.

Right now, no one in the White House is offering a real plan for the tens of millions of unemployed and underemployed American workers to be able to pay the rent, purchase health insurance, or get enough to eat.

*I used the following, perhaps overly generous, assumptions: 1 in 2 workers who were unemployed in mid-March have been able to find jobs and 2 in 10 workers who filed initial claims in the past eleven weeks have gone back to work.

**At the highest of levels of unemployment following the 2007-08 crash, there were 15.3 million jobless Americans.