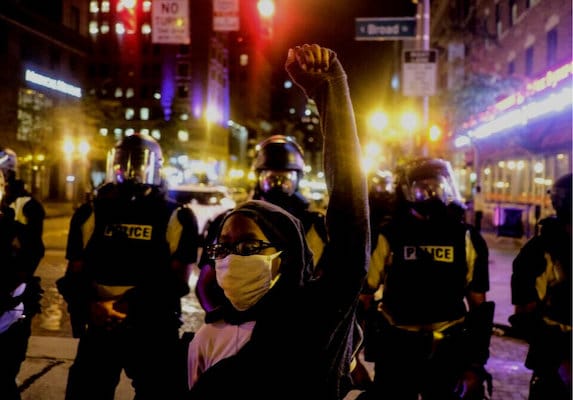 2 days ago The Black Alliance for Peace From George Floyd Back to the Structural Violence of Capitalism. Photo credit: Matthew Hatcher / Getty Images

Third degree murder for 3/5 for a devalued life
Knee in throat air gone, gasping dying under the color of law!
George Floyd had no chance! The gang of state sponsored assassins had already signed his death warrant!
They think we should be grateful for watered down justice that has not and will never be color blind!
Cry out! Resist! Don’t make excuses or apologies for race-based killings!
Don’t attack those who dare to put their lives on the line to declare: George Floyd’s life mattered. Black Lives Matter—a just demand!

Across the country—in city after city—the people have erupted in righteous indignation to George Floyd’s recorded lynching. His extrajudicial murder set off a rebellion that had been primed by the highly publicized white-vigilante murder of Ahmaud Arbery and the botched, “no-knock” police raid that killed Breonna Taylor in her bed.

The call in all of these cases is for something called justice, which the Black Alliance for Peace (BAP) sees as an impossibility. We say this because the U.S. state’s repressive DNA is rooted in the non-recognition of Indigenous people’s humanity and the exploitation of kidnapped and enslaved Africans. These two interconnected experiences produced the racialized policing that is an integral part of the U.S. state.

BAP was born in 2017 out of the recognition that the ongoing and deepening economic, social and political crisis of capitalism—sharpened by the 2008-09 economic collapse—would inevitably require the state to rely on the use of violence and force, both domestically and abroad.

That prediction was correct. However, BAP also identified structural violence as an inherent characteristic of advanced capitalism. The COVID-19 pandemic, more than anything in decades, has revealed the endemic violence of neoliberal capitalism, whereby the state’s inadequate response to a virus has killed hundreds of African/Black people on a daily basis.

However, that systemic violence has been marginalized by the acute attention placed on the highly individualized case of George Floyd and the issue of police violence. But police violence is only a mechanism used to fulfill capitalism’s main mandate to contain and control the working class—in particular the Black and Brown colonized working-class communities—and to protect private property.

For BAP, the narrow definition of “justice” as the prosecution and conviction of police involved in the Floyd murder is a conservative and even diversionary position. It takes attention away from the ongoing structural contradictions of the colonial/capitalist system that will continue to produce the deadly consequences of structural violence after 40 million newly unemployed people joined the ranks of the over 30 million people who lack any kind of basic health protection; high African/Black infant and maternal mortality rates; upper-respiratory illnesses caused by environmental pollution in African/Black communities; and hypertension, cardiovascular diseases and diabetes generated by the stresses of white-supremacist, capitalist oppression.

So, we say: Justice for George Floyd, Breonna Taylor, Ahmaud Arbery, Tamir Rice, Sandra Bland; for our political prisoners; for the super-exploited Black and Brown working class; for oppressed Indigenous nations; and for the millions subjected to U.S. warmongering, sanctions and criminality. We say this to shift the focus from the individualization of this week’s rebellion back to the objective structures of white supremacist, global colonial/capitalist domination.

To do otherwise plays right into the hands of the reformist liberal ideologues who want to engage us in pie-in-the-sky reformism that perpetuates the myth that justice will be served by merely tweaking the current system. We have seen the first iteration of such a call in the bourgeois New York Times calling for police reform.

BAP will not fall for that ideological trick bag. We say “No Compromise, No Retreat: Defeat the War Against African/Black People in the U.S. and Abroad.”

The People(s)-Centered Human Rights (PCHRs) framework informs BAP’s approach to human rights. Read this primer. PCHRs centers the people’s struggle for radical change to determine how human rights are defined and won. The United States has cynically used the United Nations’ mission of protecting human rights to justify targeting states that defy U.S. global hegemony. Therefore, we thought it useful on Friday to issue a statement demanding consistency from the United Nations, calling for the body to intervene to protect the fundamental human rights of African/Black people in the United States against Trump’s threat to shoot protesters.

Earlier last week, BAP produced a statement for African Liberation Day in English and Spanish that was widely circulated in Cuba and the United States.

Queshia Bradley of BAP member organization PACA and BAP member Erica Caines addressed an African Liberation Day webinar hosted by the All-African People’s Revolutionary Party and the Maryland Council of Elders. Hear Queshia 33 minutes into the webinar and Erica at the 83-minute mark.