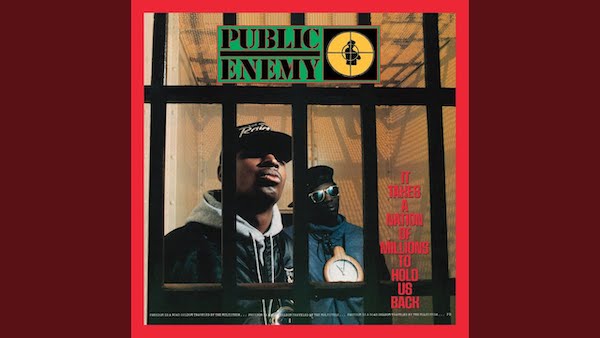 YouTube Fight The Power (From “Do The Right Thing” Soundtrack)
“Fight the Power” is a 1989 song by hip hop group Public Enemy. First released on the soundtrack for the film Do the Right Thing (Rosie Perez dances to the song over the opening credits), an edited version was released in 1990 on Public Enemy’s third album, Fear of a Black Planet. The song has largely served as the political statement of purpose for the group, and is their biggest single. “Fight the Power” was recently ranked #1 on VH1’s 100 Greatest Songs of Hip Hop, further demonstrating the impact of the song.[1] The single reached #1 on Hot Rap Singles and #20 on the Hot R&B Singles.
Another version is featured in the Chuck D Presents: Louder than a Bomb compilation, featuring a saxophone solo by Branford Marsalis. Brian Hardgroove said, “Law enforcement is necessary. As a species we haven’t evolved past needing that. Fight the Power is not about fighting authority—it’s not that at all. It’s about fighting abuse of power.
Music Videos
Spike Lee produced and directed two music videos for this song. The first featured clips of various scenes from Do the Right Thing. In the second video, Lee used hundreds of extras to simulate a massive political rally in Brooklyn. The extras carry signs featuring Paul Robeson, Marcus Garvey, Chuck Berry and Martin Luther King, Jr. Tawana Brawley made a cameo appearance. Brawley gained national notoriety in 1987 when, at the age of 15, she accused several police officers and public officials from Wappingers Falls, New York of raping her. The charge was rejected in court, and she instead was sued for supposedly fabricating her story. Jermaine Dupri also made a cameo.
Samples Used
The song’s title and chorus were inspired by—or taken from—”Fight the Power (Part 1 & 2),” a 1975 protest funk song by The Isley Brothers.
“Teddy’s Jam” by Guy “Bird of Prey” by Uriah Heep
“Hot Pants Road” by The J.B.’s (bassline)
“Pump Me Up” by Trouble Funk (percussion, vocal: “Pu-pu-pump”)
“Different Strokes” by Syl Johnson (heard before the 3rd chorus)
“I Shot the Sherriff” by Bob Marley
“Planet Rock” by Afrika Bambaataa (Vocal: “Yeah!”)
“I Know You Got Soul” by Bobby Byrd (Vocal: “I know you got soul”)
“Sing a Simple Song” by Sly & the Family Stone (Singing heard after the line “Bum rush the show”)
“Whatcha See Is Whatcha Get” by The Dramatics (guitars)
“Let’s Dance (Make Your Body Move)” by West St. Mob (Vocal: “Come on you got it”)
“Funky President” by James Brown (Heard after the line “People, people we are the same”)
The lyrics also include allusions to James Brown’s “Funky Drummer” and “Say It Loud — I’m Black and I’m Proud,” as well as Bobby McFerrin’s 1988 hit “Don’t Worry, Be Happy.”
The opening quotation, “Yet our best trained, best educated, best equipped, best prepared troops refuse to fight! Matter of fact, it’s safe to say that they would rather switch than fight!,” was taken from Chicago attorney and civil rights activist, Thomas “TNT” Todd.
Monthly Review does not necessarily adhere to all of the views conveyed in articles republished at MR Online. Our goal is to share a variety of left perspectives that we think our readers will find interesting or useful. —Eds.