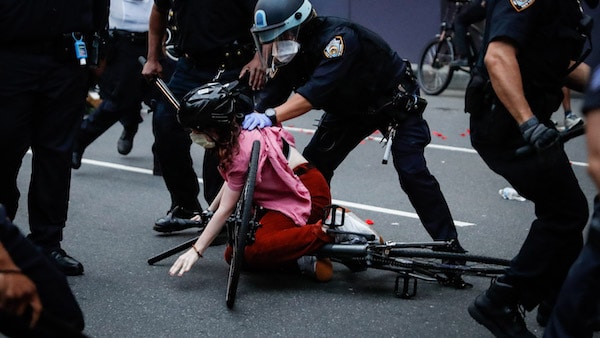 A protester is arrested by NYPD officers for violating curfew beside the iconic Plaza Hotel on 59th Street, Wednesday, June 3, 2020, in the Manhattan borough of New York. Protests continued following the death of George Floyd, who died after being restrained by Minneapolis police officers on Memorial Day. (AP Photo/John Minchillo)

New York State Governor Andrew Cuomo and New York City Mayor Bill De Blasio have declared a curfew until Monday, June 8 in response to ongoing protests sparked by the police killing of George Floyd in Minneapolis. The latest method of trapping and arresting those breaking the curfew appears to be the use of fake yellow taxis that are actually police cars.

Video circulated last night of the NYPD apparently tricking protestors trying to go home by posing as taxis and then arresting them for breaking the curfew. The images show a man being arrested and put into the back of the vehicle, almost a perfect copy of the iconic New York taxi. A 2016 Freedom of Information Request by journalist Matthew Guariglia found that the city’s police force has a fleet of at least five so-called “cop cabs,” and that the NYPD has been using them since at least 2015.

New York-based magazine the Gothamist put together a checklist of how to spot fake police taxis. Among the most glaring tells include a license plate number beginning with 2W or 6Y, missing plastic center dividers between the driver and backseat and disconnected or fake-looking meters.

THE NYPD IS DISGUISING AS TAXI DRIVERS AND TRICKING PROTESTERS THAT ARE TRYING TO GO HOME!!! SPREAD THIS AND BE SAFE from Bad_Cop_No_Donut

The curfew is the latest strong-armed measure authorities have taken to try to combat the widespread protests over the killing of George Floyd by Minneapolis police last week. Essential workers are supposed to be exempt from the new law requiring New Yorkers to be behind closed doors before 8 p.m. But, in practice, this has not been the case, with many food delivery workers, journalists and others detained.

Meanwhile, on Saturday, the NYPD brutalized 32-year-old African-American hospital worker Rayne Valentine as he was leaving his job, kicking and beating his head in until he lay unmoving in the fetal position. Valentine had to go back to the same hospital he just left for treatment, his co-workers putting seven staples in his head and attempting to stop the bleeding. Valentine suggested that his attackers may have only stopped after they noticed his bloodied hospital identification.

On Thursday night, according to one protestor, police in the Bronx trapped, maced and beat up protestors before curfew had even been started, the panic and terror causing one woman to go into premature labor. Last week, videos surfaced of multiple NYPD cruisers plowing into stationary protestors and driving away rather than helping the fallen. Meanwhile, on Wednesday, the Federal Bureau of Prisons admitted that Jamel Floyd, an African-American, diabetic, asthmatic inmate of a Brooklyn jail had been killed by authorities after they pepper-sprayed him in his cell.

The extraordinary footage of NYPD brutality circulating on the Internet has led to calls for the police to be defunded. New York State Governor Cuomo offered some mild rebuke of the force, not for its brutality, but for its failure to sufficiently protect private property. “The NYPD and the mayor did not do their job last night,” he said on Tuesday. This led to outrage from the police and from Mayor De Blasio, who insisted that he does not believe his police have beaten protestors, praising them for their “restraint.” Cuomo later apologized to the NYPD, something that suggests that it is far from clear who really controls whom. Despite De Blasio’s unwavering support, NYPD officers hold him in extremely low regard; 88 percent of police officers have a “very unfavorable” opinion of him, according to a Patrolmen’s Benevolent Association survey.

With more than 50,000 uniformed officers, the NYPD dwarfs the police departments of other cities in its sheer size. It also boasts double the police per capita than cities like Phoenix and Dallas. The department’s massive $6 billion annual budget is larger than the total GDP of over 40 countries and eats into the far smaller budgets for underfunded essential services. During the middle of a pandemic, Cuomo greatly slashed the state’s health budget, but left policing largely untouched. And under De Blasio, both the number of police and their budget has soared. Around half of all NYPD officers do not even live in New York City.

Last week, the NYPD attempted to force the city’s bus drivers to transport arrested protestors from Brooklyn’s Barclay Center. However, to the sound of cheering crowds, the unionized drivers refused to do so, walking out of their vehicles. In contrast, in Minneapolis, the epicenter of the George Floyd protests, MintPress News cameras filmed police using six large articulated buses to silently move huge numbers of police in riot gear towards the city’s fifth precinct. “There’s like a million of them,” said MintPress founder Mnar Muhawesh, “they came in super quietly. Their lights were all off, they are ready to march through.” It is unlikely that many will know the area well, however; only around eight percent of Minneapolis cops live within the city’s limits. Perhaps St. Paul’s mayor was correct after all when he said that organized outside agitators were responsible for the violence.