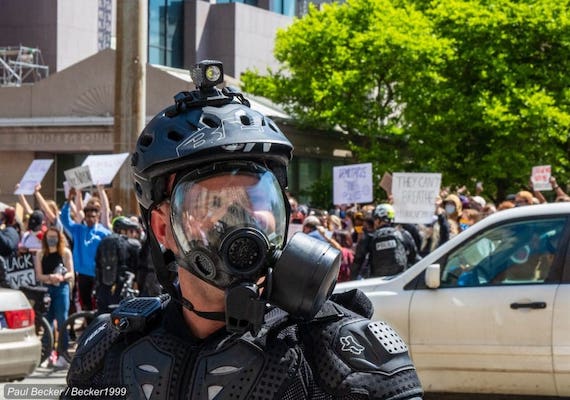 A police officer wears a gas mask at a recent protest over police brutality and racism. Credit: Becker1999 via Flickr. CC BY 2.0.

In the midst of national protests against racism and police brutality, President Donald Trump on Monday walked a short distance from the White House to St. John’s Church. The visit was for a photo op in which Trump held up a bible as though it were a ticket he had just plucked from a raffle drum. In order for the president to get to the church, however, the protesters in his path first had to be dealt with; Attorney General William Barr reportedly ordered police to disperse them. Law enforcement officers rushed into the protest, striking demonstrators and press alike and firing smoke canisters and tear gas at the crowd.

Scenes from the protests across the country in the past few days look almost like they were ripped from a dystopian movie. Police marched through a residential neighborhood in Minneapolis dressed as though they were on patrol in Fallujah circa 2004. Military helicopters hovered just above protestors in Washington, D.C., National Guard troops have been deployed in many American cities. Among all of the symbols of a militarized response to the protests sparked when a black man named George Floyd died after a police officer knelt on his neck for several minutes, one of the most potent is tear gas, which authorities have been firing at demonstrators in cities from Philadelphia to Seattle. Unlike the tactical gear and military vehicles U.S. police often employ, tear gas isn’t even allowed on actual battlefields.

Here’s how this scene was viewed live in Australia. One of America’s closest and most dependable allies. Rendered speechless. Just watch. pic.twitter.com/IjOzgs3WYo

The tear gas that police fired ahead of Trump’s visit to St. John’s as well as other similar chemicals fall within a substantial exception to the global prohibition against chemical weapons enshrined in the Chemical Weapons Convention. Just as it’s not legal to shell an opposing army with sarin or mustard gas, it’s also illegal to fire off commonly used riot control agents such as chloroacetophenone (CN) and chlorobenzylidenemalononitrile (CS) in war. Against protestors in one’s own country, however? Perfectly legal. Law enforcement use of so-called riot control agents isn’t prohibited by the treaty.

Some weapons researchers think the law enforcement exception in the Chemical Weapons Convention was a mistake.

By the 1990s, when the Chemical Weapons Convention was being finalized, most chemicals used against people were employed in law enforcement contexts, University of Massachusetts Lowell professor Nicholas Evans said. Evans, who researches national security and emerging technology and has taught courses on weapons of mass destruction, said that a lot of scholarship suggests that without an exception for riot control agents, countries would never have agreed to the Chemical Weapons Convention. “This was the catch, which is that countries reserve the right to effectively use chemical weapons on their own people,” he said. “I think we missed the forest for the trees when we thought through what it was to use a chemical weapon.”

Riot control agents, according to the Organization for the Prohibition of Chemical Weapons, which implements the Chemical Weapons Convention, are designed to cause sensory irritation or temporary disability and to have effects that dissipate quickly once a person is no longer exposed. Unlike well-known chemical weapons like sarin, chlorine, and mustard gas, riot control agents are not intended to kill or cause serious injury, but that doesn’t mean law-enforcement chemicals are safe. According to a U.S. Centers for Disease Control and Prevention factsheet, long-lasting exposure to tear gas can cause lethal chemical burns or respiratory failure. For people with certain health conditions, the effects of the gas could be worse. Evans, for instance, said he is seriously asthmatic. “I am uniquely unsuited to being tear gassed,” he said. “I am uniquely unsuited to being pepper sprayed.”

And while not intended for use in war, tear gas has been fired across international borders, as it was when U.S. border agents did so against would-be migrants seeking to cross from Mexico into the United States. It can even be used by U.S. troops on foreign soil (as a riot control method), as it was when troops fired tear gas at protestors in Baghdad earlier this year. The tear-gas-soaked scenes playing out at protests across the country may not be war, but they’re certainly being described like that by reporters and demonstrators.

A United States Park Police statement said the tear gas authorities used before Trump’s photo op at St. John’s Church wasn’t tear gas but “pepper balls,” canisters of irritant that can be dispersed in the air. The term tear gas, however, is frequently used to describe an array of chemicals used against protests that can cause “excessive tearing,” according to the U.S. Centers for Disease Control and Prevention. Other symptoms include shortness of breath, burns, rash, and vomiting.

Remarkable photo via @MarthaRaddatz, where protestors are being blocked from the steps of the Lincoln Memorial pic.twitter.com/d7givADFQH

Despite initially deciding to send active-duty troops home from the capitol region, Defense Secretary Mark Esper reversed course Wednesday and ordered about 200 soldiers from the U.S. Army’s  82nd  Airborne Division to stay, complementing the National Guard troops and agents with various federal agencies already in the Washington, DC, area. The reversal was just one example of how the administration continues to advocate militarizing the response to the protests, a vision Trump wants to see play out across the country.

On a call on Monday, Trump told governors to “dominate” the protests or risk looking “like a bunch of jerks.” Some states are getting the message, at least in the president’s telling. On Saturday, Minnesota National Guard troops in Minneapolis fired tear gas, paint rounds, and rubber bullets.

Trump sounded upbeat and pleased with what he’d seen go down in the land of Minnesota Nice. “All of the sudden my wife said to me, ‘wow look at all these people.’ They got out and were wearing dark black uniforms,” he told the governors.

They got out and they were there in the houses, and they walked right down the street, knocking them out with tear gas, tear gas.

It was, in the eyes of the president, “incredible” domination.