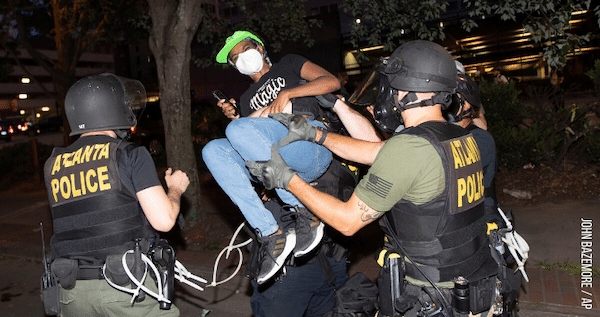 Since protests have spread to all 50 states in response to the police murders of George Floyd and countless other Black people, law enforcement has responded with a violent show of force against protestors as well as journalists, street medics, and legal support. Multiple National Lawyers Guild (NLG) Legal Observers (LOs) have been arrested or injured while monitoring demonstrations against racialized police brutality. The NLG strongly condemns this attack on Legal Observers, who attend protests to document police activity and ensure demonstrators’ legal rights. Guild LO’s wear neon green hats and other paraphernalia with the label “NLG Legal Observer” to identify their role, but this visibility has also made them a target for police.

In the past week, police have arrested, attacked, and tear gassed LOs in a least a dozen cities. In Sacramento, LO Danny Garza was shot in the face with a rubber bullet while covering local demonstrations, and hospitalized due to a concussion. A Bay Area LO was shot with high speed impact munition by police in Oakland, and a San Jose LO suffered multiple contusions from rubber bullets. While legal observing in Chicago, Guild member Michael Drake was knocked to the ground and beaten with batons by at least five officers simultaneously before being arrested. Several LOs in Detroit were beaten with batons, punched, tear gassed and then arrested while trying to take names from arrested protesters. Multiple LOs in various cities have been detained or arrested for monitoring protests after the start of arguably illegal curfews, including Washington D.C. and New York City. Most charges against LOs include disorderly conduct, resisting arrest, and breaking curfew.

Reports from NLG chapters in multiple cities lead us to conclude that police are intentionally targeting LOs. In Atlanta, LOs Megan Harrison and Asia Parks were arrested and held for 17 hours before being released. According to Harrison, she was walking down a line of protesters linking arms, taking names and dates of birth in case of arrest. When police attacked the crowd, she heard “get the girl in the green hat,” before being grabbed from behind and forcibly arrested. In Des Moines, LO Ryan Krause was physically detained by a group of police who tried to take his notes and called legal observation “suspicious activity” and “harassment.” In Kansas City, several LOs were physically shoved and pepper sprayed by police, while being told their “credentials would not protect them.”

“The targeting of NLG LOs goes right to the heart of why we do this work. While the police enforce the law on protesters, who is there to monitor the police? The intentional targeting of NLG Legal Observers by the police is a showing of confidence and hubris that they expect to remain unaccountable,” said Garza.

NLG Legal Observers are a core part of the NLG Mass Defense program, which began in 1968. For the past 50+ years the Guild has provided legal support designed to enable people to express their political views as fully as possible without unconstitutional disruption or interference by the police. The NLG will be putting the full support of our network of thousands of legal professionals into assisting protesters, including our LOs and the many journalists and street medics who have also been arrested or injured during these police riots.

We are deeply grateful to our LOs on the ground, and Guild members and staff are following up with LOs arrested or injured to assist with possible legal, physical, and mental health needs. We affirm our ongoing support for Black organizers and activists who continue to face the greatest amount of violence, harassment and intimidation by law enforcement.