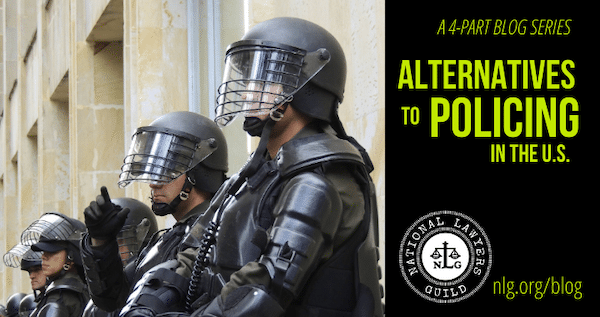 This is the concluding post in a four part series, view the first three parts HERE

The NLG National Office, in collaboration with NLG Review, is publishing a 4-part blog series exploring questions around policing in the United States. Guild members shared pieces analyzing the policing of social movements, the role of police in maintaining current power dynamics, and alternatives to policing from community power to defunding to abolition. The goal of this series is to generate discussion and conversation among our members and the public regarding the current state of policing and to envision new strategies of social organization. Please also read the Guild’s recent resolution supporting the abolition of policing passed by the membership in 2020.

In the final piece of the series, NLG Anti-Racism Committee Co-Chair and one of the proponents of the 2020 policing resolution Kira Kelley makes the case for the abolition of policing and offers examples of individuals and projects taking power and resources away from police and prisons to create non-carceral, non-punitive alternatives.

Challenging a multi-billion dollar industry and centuries of social conditioning, abolitionists work to debunk the propaganda that equates policing with safety. In reality, police are fundamentally dangerous; they were created and are maintained to protect racial capitalism. In order to achieve their foundational purpose, police destroy lives and communities—in particular, those of Black and Indigenous people.

The wealthy elite sustain their ability to profit off of everyone else because they have a mechanism to keep exploited people under control: policing. In order to manufacture our consent to this set-up, beneficiaries of this system instruct everyone who is concerned about police brutality to see law enforcement as a less than ideal, but still necessary feature of society.

This conditioning tells us that police prevent violence, when in reality police simply control and respond to violence and themselves directly enact it. Under the guise of “protecting and serving,” police enforce laws that prop up systemic racism and poverty, criminalize addiction and block access to health care, and trap people in abusive situations.

Campaigns to reform and thereby to preserve policing glorify anecdotes where someone who prevented harm also happened to be a law enforcement officer. These incidental positive outcomes are attributed to the uniform, not the person in it, and are uplifted to justify salvaging an institution whose primary function is to maintain power hierarchies.

A false solution should not be preserved for its alleged incidental benefits, when those incidental benefits could in fact be better achieved by the mere elimination of the false solution. To effectively reduce hardship, we must abolish systems that stabilize oppression and that encourage certain people to kidnap, assault, and murder others—like prisons and police.

A Close Look at Reality

Statistics abound in leftist and liberal discourse that support a critique of policing: police are the sixth leading cause of death for young Black men; the majority of all police murders arise when cops respond to a nonviolent situation; and the U.S. prison industrial complex costs over $180 billion annually to operate yet has no positive effect on public safety.

These numbers, infuriating and tragic as they are, still paint an incomplete picture of the pervasive and constant violence that police represent. Records are rarely created after non-lethal police assaults, which are bread and butter in the establish-control-at-all-costs training of a police officer. Nor will any survey accurately document the full harm of sexual assault police commit both on duty and in domestic situations using the training, equipment, and immunity from consequences that comes with a badge. Incalculable incidents of sexual violence are never reported, or when reported are ignored or met with retaliation. Police target already vulnerable populations, such as sex workers, unhoused people, disabled people, people suffering from addiction, and people with existing criminal records—all of whom are less likely to be believed should they share their experiences.

Police defenders often respond to these critiques by invoking gruesome case studies, citing insatiable murderers to demonstrate that police are ultimately still necessary. Notably, serial murderers commit about 1 out of 100 homicides. Police officers commit about 1 out of 16. (These calculations include police who committed but were not convicted of murder, and exclude suicides.)

Even after pointing out that police and prisons have categorically failed to prevent or even reduce violence in our society (and to the contrary are a direct cause of it), abolitionists are constantly asked to provide an alternative safety plan before reformists consider abolition itself as an alternative.

Abolition is a realistic, practical solution. Abolition uproots our toxic fixation with ignoring or exacerbating systemic problems and instead throwing money at an industry that counterproductively addresses the flashiest symptoms. Extricating ourselves from our contrived dependency on the prison industrial complex frees up our financial and imaginative resources to invest in localized, effective solutions. Without police, we can address the drivers of such intense and frequent circumstances of harm—disparate access to healthcare, education, and housing for example—while also embracing better ways to heal from the harms that do exist.

“No Police” Does Not Mean “No Response”

Police should not be the ones searching for missing people, intervening in abusive situations, responding to people in crisis, mentoring youth, or helping people who have been robbed figure out what’s missing and what they might need to feel safe. Police training makes someone a danger, not an asset, to people in these situations.

A world without police would still have people who are willing to take risks for the well-being of others. People would still be breaking up fights, asking neighbors to turn the music down, and talking to people who are causing harm or who are suffering. But, without police causing these problems and then solving them clumsily or dangerously, the solutions we design will be intentional and thus more effective and better funded, and there will be fewer problems to solve. Literally and metaphorically, we can fix each other’s broken tail lights by offering resources and support, not by imposing fines or pointing guns.

A key difference between policing and an abolitionist, community-driven approach to safety is this coercive power dynamic. Lying to cops is criminalized, but cops go to school to learn how to lie. Cops can physically and sexually assault, kidnap, and murder people with near impunity, but if a civilian so much as puts a hand on a squad car, they risk the charge of assaulting a police officer. Police prevent people from using discretion to break immoral, oppressive or pointless laws, but an officer can claim to have used their “reasonable best judgement” as a virtually ironclad defense against liability for harmful and violent behavior.

Some people become police officers out of a desire to serve their community and a willingness to risk their lives for the greater good. These community-minded recruits become the so-called “good cops” who despite best intentions are inescapably harmful. Any initial compassion is lost to a violent institution whose training and function is to reproduce and stabilize anti-Blackness, racism, ableism, colonialism, transphobia, misogyny, xenophobia, and classism.

Abolition would not rid our world of people who would risk their own lives to save other people. Instead, abolition would prevent the institution of police from co-opting, corrupting, and weaponizing the kindness of people who buy into propaganda telling them that the best way to help their community is to join the police force. This theft is just one more way that police turn a community’s resources against it.

People can much more effectively and safely protect and serve their community by joining EMTs, firefighters, social and mental health workers, teachers, crossing guards, youth mentors, organizers, mutual aid providers, and other groups—who would be much better financed without having to compete with police budgets for resources.

Police are the enforcement tool of a colonizer system that allow the rich to hoard resources and coerce labor from everyone else. This system pays and trains its henchpeople to selectively murder, assault and imprison people who are Black, Indigenous, poor, brown, queer, trans, disabled, and/or immigrant, and anyone fighting the racial capitalist and imperialist status quo.

Police evict houseless encampments near shopping districts that “interfere” with business. At the beck and call of railroad and coal industries, police arrest activists who put themselves in front of trains to disrupt a lethal economy repeatedly refusing to pay its workers and destroying the chance of a livable future for all of humanity. Police make arrests to meet quotas, ensuring a guaranteed population of legalized slave labor to work in prisons and a steady supply of new construction, security, medical, and consumer goods contracts for the ever expanding prison industrial complex.

Not only does racial capitalism govern police discretion in oppressive ways, but also police enforce laws that themselves are tools of oppression. Police, prisons, lawmakers, and the courts work together using the fallacy of legality to justify exploitation. In addition to abolishing police and our fixation with revenge and punishment as a proxy for healing, we must also dismantle the belief that laws and courts are somehow “neutral” or inherently just. Laws and courts exist to maintain stability, not fairness. The people with control over what laws are passed and which judges get appointed have a vested interest in maintaining this complacent, ordered society, which operates on international human and environmental exploitation. Courts, much like police, are designed to appear impartial in order to disguise that their fundamental reason for existing is to protect hoarded wealth. However, both institutions are charged with maintaining the status quo, which is far from neutral and skewed at its core against collective well-being.

If we want to live in a society whose stability does not depend on exploiting marginalized groups and whose existence does not guarantee ecological collapse, we need to revoke our consent to be governed by the courts, prisons, police, and laws that entrench this reality under the guise of public safety.

What Can Be Done?

Abolitionist practice can be anywhere on a spectrum from individual to systemic. Individual abolitionist practice lets us begin to shatter the molds we have been cast in that shape us into carceral thinkers. This in turn helps us build healthy and powerful relationships with each other as we plug into groups working systemically to shatter the machines that cast everyone else in the same mold.

Projects that take power and resources away from police and prisons and/or to create non-carceral, non-punitive support mechanisms for people vary widely in scope and form. Other bloggers in this series have already lifted up the incredible work of CAHOOTS (Crisis Assistance Helping Out On The Streets), which is a fantastic example of how all over the country people are creating new social service organizations or eliminating the police presence in existing programs to provide resources, without coercion, to people struggling with addiction, mental health, domestic violence, and houselessness. Abolitionist pen-pal and solidarity letter-writing programs offer tangible, accessible ways to grow the movement. Groups are passing municipal legislative measures that include non-reformist reforms and cuts to police budgets. People across the country train themselves in de-escalation and conflict resolution, form mutual aid groups, and host pop-up free clinics to fix tail lights.

Abolition can and must happen immediately, without requiring a universal alternative method of curbing violence or addressing harm to be put in place first. Communities who have never been able to safely call on the police have already developed and implemented these practices. Any mechanism for public safety should not be imposed like just another top-down mandate that disregards the specific needs and autonomy of each different community.