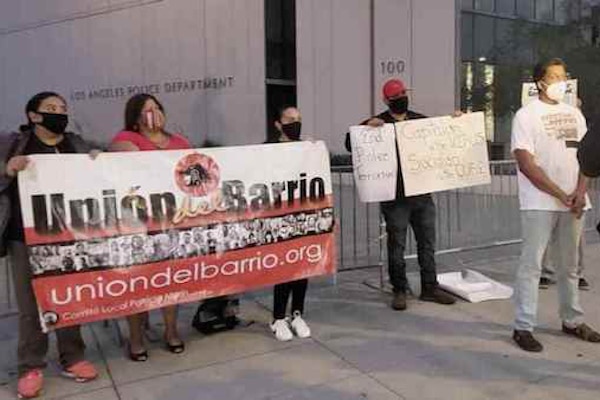 These words are inspired by Joe Biden telling us what it is to be Black.

You see, not all Black folk look or think alike. And not every organization will have the same political analysis of the events before our eyes. Now, we respect all of those honest organizations that hold different views on how we can go about liberating ourselves, and we respect your right to choose what organizations you believe tell more of the truth as you see it. And we encourage you to find out and participate in the activities of all honest organizations to find what best fits.

So don’t let anyone tell you not to attend a demonstration from any honest organization. No one organization owns the movement, nor any issue. Yes, if it’s a Black issue, then Black organizations should take the lead–but there are more than a few, and just like we don’t all look alike, neither do our organizations.

I’m a member of the Socialist Unity Party and its Black Caucus, which is a member organization of the National Alliance Against Racist and Political Repression. You’d be surprised at how many Black socialists and communists there are, like George Jackson, a Black Panther and political prisoner who was assassinated by the pigs. I mention George Jackson because we have to begin to truly honor our ancestors by studying them and the people they studied.

In regards to unity, we must get serious and, like Jackson, study Amilcar Cabral, the African communist revolutionary liberator of Guinea Bissau and his skillful guidance for building the unity of the entire working class.

Now, some organizations or church leaders (not all church leaders, mind you) will tell you to denounce or strongly condemn our youth if, in the course of their displays of anger, they happen to vandalize or take back some of the wealth that is stolen from them 24/7 by this capitalist system and the corporations that exploit them.

I and the Black folks I associate with believe that the vandalism and so-called looting are created by conditions that these youth did not create. See, the rebellion that oppression inspires is not going to always look pretty, but it carries a message of warning to the powers that be, an essential message that has the power to push them back. The monopoly corporations that run this country and own the politicians like Trump and Biden are afraid of those rebellions because it challenges their right to rule over us.

When the four cops finally got charged–was that from us begging? No, it happened after a Minneapolis police precinct got burned to the ground.

So I’m not one of those Black leaders who condemn our youth because their messages or actions may not be perfect. I and the Black folk I associate with applaud them and will do everything we can to amplify their message and give them a platform and guide them as well toward a revolutionary direction that is not confined by the ideological limitations that this system dictates.

There are some organizations that are happy to replace one treacherous Black official cop with another cop, or are happy to hug or kneel with or include pigs in their actions, or make demands that are so weak they can easily be wiggled out of.

I and the Black organizations I associate with don’t want demands that give Los Angeles Mayor Garcetti–who praises the attack dogs in blue he sics on us–too much wiggle room. Because when the politicians have too much wiggle room, they use it to wiggle a noose around our necks.

There’s a shell game going on right now with Garcetti’s budget. See, he knows in this moment he’ll need to give an appearance of compromise, so he’s already figured out the small pittance he’ll give away that still allows business as usual. A couple hundred million dollars from a $2 billion or more budget is nothing, because it leaves plenty of money for the purchase of the bullet that is aimed at my son’s head, or your daughter’s.

This is an existential threat–this is life and death and the only way to stop that bullet from killing my son or your daughter is to take their damn guns away. So, when we say “Defund the police,” we must include the demand to disarm the police immediately. Maybe there needs to be more emphasis on the gun because, yes, we should also defund the police, but that demand alone leaves them holding guns. Too much wiggle room for me.

See, we have to get serious and study like George Jackson did.

Know who else George Jackson studied when he wanted to understand the nature of the police in this country? He studied Lenin, the leader of the Russian Revolution. Lenin understood that capitalism and its superrich monopolies that run things cannot survive without the police protecting the wealth they stole from you and me. To keep us from protesting that theft against us, police are used to keep us in fear as they push us further into poverty.

That right arm of capitalism–the police–will never be negotiated or voted away as long as capitalism exists, unless the ruling class is forced to disband them by a mightier force than their cops and military.

We have the potential to become that force. Not by begging or playing within their rules, but by building the understanding of what’s needed and doing the things that make their system come to a halt.

When we study history and social science in a serious way, as George Jackson did, we’ll understand that demands must clarify what is actually needed to the people. We also need to understand that our Black, Brown and Indigenous communities must have the right to banish these pigs from our neighborhoods and the right to the resources to train and develop our own community entities of safety and protection.

We are in a war–a war from an oppressor that is attempting genocide against us. And when you are fighting genocide, you can’t play nice. You gotta scrap, you gotta bite, you gotta do whatever is necessary and use any means to get that knee off your neck. That’s the kind of Black revolutionary I am. What kind of revolutionary are you?

If you’re the kind I think you are, then maybe we should talk. Maybe you should talk to the organizations with demands that are clear about what’s needed. Get in touch so we can build that mighty force whose aim is to build a better world and take down this genocidal system.