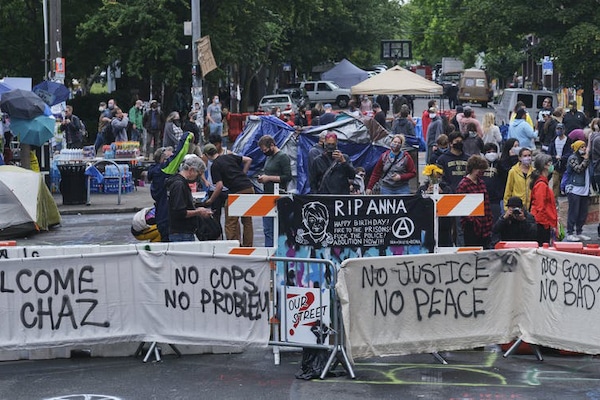 A new autonomous zone set up in Seattle by the Black Lives Matter (BLM) movement bears some striking similarities with the Paris Commune of 1871. Despite its brutal ending, the seminal event in the French capital 150 years ago set the agenda for progressive urban politics and broader social justice movements ever since. But while what is happening in Seattle shares some of the political visions of the commune, it faces an altogether different and more sophisticated threat–of being co-opted by creative capitalists.

The Capitol Hill Autonomous Zone in Seattle–or Chaz as it has come to be known–was set up on June 8 in the Capitol Hill area of Seattle. It came about as a result of BLM protesters moving in after the Seattle police abandoned the precinct due to clashes with protesters.

Since then, the protesters have barricaded the perimeter and set up a “no cop co-op” offering free water, hand sanitiser, face masks, food and other supplies. There are teach-ins, street art installations and other activities often associated with anarchist urban protest camps.

Cities have been the focus of protests movements for centuries, because as urban sociologist Saskia Sassen has argued, the city has always been a place where the powerless can make history. As such, the creation of Chaz has the potential to cement the movement firmly within the pantheon of urban revolutionary histories. And given the list of demands that it has produced, which includes abolishing the police, retrials, amnesties for convicted protesters and rent control, there is a deeply radical politics at its heart.

So there are some obvious comparisons to make between Chaz and the Paris Commune. In Paris, the proletariat were reacting to their long economic oppression by the French elite. In response to an advancing French army looking to disarm them, they barricaded themselves in the capital. 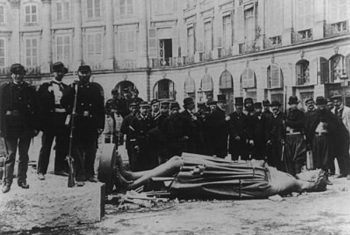 Communards with the Vendôme Column in 1871. André Adolphe Eugène Disdéri via Wikimedia Commons

The 2015 book Communal Luxury by the French culture and literature expert Kristin Ross paints a vivid picture of the Paris Commune as an important revolutionary moment. But more than simply accounting for the commune’s failure, she argued that its vision of a radically different world was more important than ever after the 2007-09 financial crash.

In the three months that the commune existed, communards tore down imperialist statues such as the Vendôme column, changed the education system so that it empowered the working class and abolished the police. Debt was cancelled and rent suspended. There were street festivals and migrants, refugees and women were empowered. The commune, Ross argues so eloquently in her book, is more than a historical event; it is live resource that can also help us build a better world today.

Chaz creates a space for these radical politics to gestate, as a real-life urban laboratory of revolutionary thought.

But while there are certainly some similarities with the progressive ideals of the commune, there are some dangers too. The French capitalist state quickly and violently massacred the commune’s inhabitants. While the Trump administration could potentially react with violence in Seattle, there is also the danger that the co-optive power of urban “creative” capitalism could soften–and eventually blunt–Chaz’s progressive ideals. 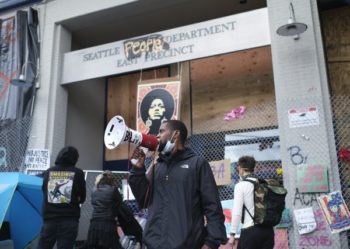 Similar autonomous zones have existed around the world for decades such as Christiania in Copenhagen, Denmark and Užupis in Vilnius, Lithuania. But these and many others have become a kind of pastiche of their anarchist and anti-capitalist ideals. There may still be fundamental principles of solidarity, collective ownership and anti-capitalism within these places. However, they have become cocooned in a veneer of branding, advertising and commercialised and gentrifying versions of the “creative city”. This restricts and severely dilutes the dissipation of their ideologies.

With Chaz too, the lure of “protest chic” may be too much to resist–it is after all in Seattle, one of the U.S.’s most heralded creative cities. For Chaz to resist this, it must resolutely be a space of the oppressed and the black voices of the movement. In essence, white people can help set it up and maintain it, but they must remain silent inside it and let the oppressed use the space to strategise and mobilise.

The Paris Commune didn’t end too well, and the murmurings from President Donald Trump are that the Capitol Hill Autonomous Zone may not last too long either. But that the commune is still taught and talked about today is testament to its lasting positive effect within urban politics. It may have been brutally quashed, but its anti-capitalist spirit set an example for nearly 150 years of subsequent urban struggles all over the world.

Cities have always been where the voiceless find their voice and articulate their demands most vociferously. For those who are deeply involved in the BLM movement (which should be all of us), let us hope that is still true

Oli Mould specific research interests cut across a number of traditional academic themes such as urban politics, creativity, cultural studies and social theory. I have published work on the creative practices of cities (both those that contribute to capitalist accumulation and those that try to resist it), architecture, the representation of cities in film and labour in the creative economy. Currently, I am engaged in work on urban politics, creativity and social justice. Books include Urban Subversion and the Creative City (Routledge, 2015) and Against Creativity (Verso, 2018).

Oli Mould is a lecturer in Human Geography, Royal Holloway