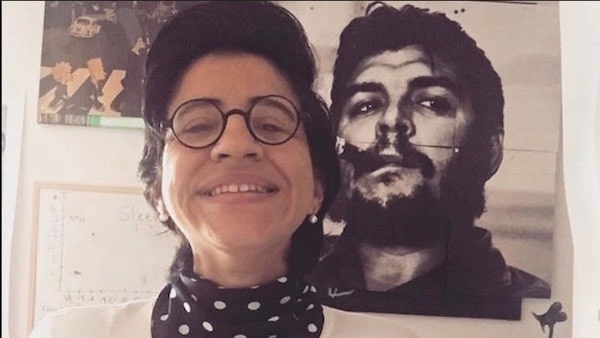 LGBTQ and human rights activist, Sara Hagezy, was only 30 years old when she died, on June 14, Sunday.

30-year-old Egyptian LGBTQ and human rights activist Sara Hegazy died of suicide on June 14, Sunday, at her residence in Canada. She had been living in exile in Canada since March 2018 to escape persecution by the Egyptian government. Hagezy was also a communist activist.

She was among those arrested by the Egyptian state in September 2017, after attending a rock concert in Cairo by a prominent band from Lebanon. Mashrou Leila, the lead singer of the band, Laila Project, is a known face of the LGBTQ community. A large number of people at the Cairo concert had waved gay pride (rainbow) flags in solidarity and written about the event on social media, leading to their arrest.

Hagezy and her 21-year-old comrade, Ahmed Alaa, were arrested from their homes in the middle of the night, a week after the concert. They were charged with “habitual debauchery”, “inciting indecency and debauchery” and “joining a banned group.”

Hagezy was working as an IT professional at the time of her arrest. She was fired from her job by her employer, allegedly under state pressure.

She, along with the others arrested at the time, were subjected to various forms of mental and physical torture by the police and the jail authorities, as per some reports. Some of those arrested have been sentenced to jail terms ranging from six months to six years. Hagezy and Alaa were released on bail after three months in prison, in January 2018. A few months later, they both moved to Canada.

Persecution by law and society

Talking to NPR after her release from jail in March 2018, Hagezy had said,

It [waving the rainbow flag] was an act of support and solidarity–not only with the vocalist but for everyone who is oppressed.

We were proud to hold the flag. We wouldn’t have imagined the reaction of society and the Egyptian state. For them, I was a criminal–someone who was seeking to destroy the moral structure of society.

Referring to the physical and mental abuse she faced during her incarceration, she said, “I left this experience after three months with a very intense, serious case of PTSD [post-traumatic stress disorder]” and “Prison killed me. It destroyed me.”

The arrests in 2017 were the most serious since 2001, when over 50 people were arrested by the police from a floating nightclub. The reforms in the political system post the popular protests in 2011 did not change the Egyptian state’s attitude towards homosexuality. Hundreds have been arrested since for their sexual orientation or for their advocacy of LBGTQ rights under Abdel Fattah al-Sisi’s rule.

Though there is no specific law against homosexuality in Egypt, so-called “immoral acts” clauses have been used to harass and imprison LGBTQ persons and activists by the state. In most of the cases, a 1960 anti-prostitution law is used to charge people with “debauchery”. Egyptian courts have also played along with the conservative sections of society, and followed this interpretation of the law to criminalize homosexuality.

The persecution of LBGTQ activists is also reflective of the general authoritarianism of the Egyptian state under president al-Sisi, whose government has used all kinds of oppressive measures to silence political dissent and human rights groups in the country.

A year after the rainbow flag controversy

Editor’s note: This article by Sarah Hegazy, who was imprisoned and driven into exile for raising a rainbow flag at a concert in 2017, was originally published in Arabic on Mada Masr in September 2018. Sarah recently took her own life after a long struggle in exile. She is grieved by many. We are publishing the English translation now to make Sarah’s words accessible to a wider readership.

This could be described as a race for religiosity. I am speaking of religion not just as a set of practices, but as pride and a sense of superiority that comes simply from belonging to a certain religion or for carrying out certain rituals.

The regime uses its tools–such as the media, and mosques–to tell Egyptian society, which is understood to be “religious by nature”: We too protect religion and social morality, so there is no need for Islamists to compete with us!

The state, and the ruling regime in particular, is puritanical. As I was being arrested from my home, in front of my family, an officer asked me about my religion, about why I had taken off the veil, and whether or not I was a virgin.

The officer blindfolded me in the car that took me to a place I could not know. I was led down a stairway, not knowing where it would take me. Just the sound of a man’s voice saying “Take her to al basha,” and a disgusting smell, and the sounds of people moaning in pain. I was sitting on a chair, my hands tied, and a piece of cloth in my mouth for reasons I could not understand. I could not see anyone, and no one spoke to me. A short while later, my body convulsed and I lost consciousness for I don’t know how long.

It was electricity. I was tortured with electricity. They threatened to harm my mother if I spoke about it to anyone–my mother who died later, after I left.

Electrocuting me was not enough. The men of the Sayeda Zeinab police station also incited the women being held there to sexually assault me, physically and verbally.

The torture didn’t end there. It continued in Qanater women’s prison, where I was held in solitary confinement for days and days, before being moved into a cell with two other women, whom I was prohibited from speaking with.

I was prevented from walking in the sunlight for the entirety of my time in jail. I lost the ability to make eye contact with people.

The interrogation that took place at State Security Prosecution was a demonstration in ignorance. My interrogator asked me to provide evidence that the World Health Organization does not consider homosexuality to be a disease. My lawyer Mohamed Fouad actually did contact the WHO, who produced a memo stating that homosexuality is not a disease. My lawyer Hoda Nasrallah contacted the United Nations, who also produced a memo stating that respect for sexual preference is considered a human right.

Ahmed Alaa and I discussed all of this at the State Security Prosecution.

My interrogator’s questions were naive–he asked me whether communism was the same as homosexuality. He asked me, sarcastically, what was keeping homosexuals from having sex with children and animals.

It is not surprising that his thinking is so limited. He probably considers Mohamed Shaarawy a great sheikh, Mostafa Mahmoud a fine legal scholar. He probably thinks the world is conspiring against Egypt, and that homosexuality is a religion we invite people to. He has no sources of thought, other than his family, religious men, school and media.

I was struck with severe depression and post-traumatic stress disorder, and I developed severe anxiety and panic attacks. These were treated with ECT, which caused memory problems. Then I had to leave the country for fear of being arrested once again. While in exile, I lost my mother.

Then came another round of ECT treatment, this time in Toronto, and two attempts at suicide. I stuttered when I spoke–I was in terror. I was unable to leave my room. My memory deteriorated further. I avoided speaking about jail, avoided gatherings, avoided appearing in the media, because I would easily lose focus and feel lost, overcome by a desire for silence. This was all alongside a loss of hope in treatment, a loss of hope that I would heal.

This was the violence done to me by the state, with the blessing of an “intrinsically religious” society.

Whoever differs, whoever is not a male Sunni Muslim heterosexual who supports the ruling regime is considered persecuted, untouchable, or dead.

Society clapped for the regime when it arrested me and Ahmed Alaa, the young man who lost everything for raising the rainbow flag.

The Muslim Brotherhood and the Salafists and the extremists finally found agreement with the ruling powers: they agreed on us. They agreed on violence, on hate, on prejudice and persecution. Perhaps they are two sides of the same coin.

We did not find a helping hand except from civil society, which did its job despite the state’s oppressive restrictions on their work.

The efforts of civil society, even after I was released, cannot be accounted for or appreciated with words on paper, but these are all I have. So I ask for the forgiveness of the lawyers and the rest of civil society for my inability to express my gratitude, except with words of thanks.

A year after the Mashrou’ Leila concert, and after the musicians were banned from coming back to Egypt, after a year-long security campaign against homosexuals, a year after I announced my difference–“Yes, I am a homosexual”–I have not forgotten my enemies.

I have not forgotten the injustice which dug a black hole into the soul and left it bleeding–a hole which the doctors have not yet been able to heal.