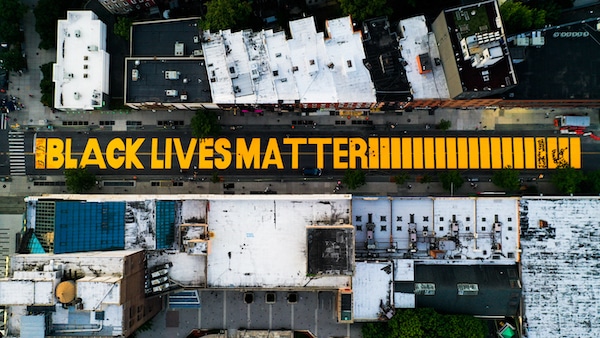 The crowd cheered. I hustled to slide the fresh battery into place, snap the latch closed, click on, and survey the scene. On their knees, protestors in front of the newly erected fence applauded as a cop on the other side took a knee. Around him, other cops seemed to take no notice, shifting in their riot gear as the sun slowly dipped behind the White House. I didn’t bother taking a picture. Shallow displays of solidarity are easy and pathetic, both in practice and in pictures.

More so than that, they are dangerous. They offer up an illusion of hope and trust in the system. They bolster the “some bad apples” argument in the face of a deeply rotten institution, founded in slave patrols, constructed to serve and protect the ruling class. They argue that performative theatrics are synonymous with real systemic change. They represent the insidious drive to gaslight us into apathy, to bury violence beneath a fleeting veil of showy concern. 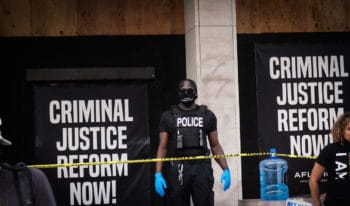 It’s the ultimate abusive relationship: the people and the state–the police like an exaggerated arm holding a cocked gun; saying it’s for your protection as you find yourself in its crosshairs. I mean really, it’s almost too cliché. From Fort Worth to Charlotte to DC, cops have been seen kneeling down before and/or after they violently attack protestors with tear gas. The only thing missing is a rose and a ring. Even members of the FBI felt the tug of performative wokeness, taking a knee as if they don’t represent the ultimate in domestic violence policy: from COINTELPRO to stalking and surveilling Black activists as part of the new and improved war on “black identity extremism.” Cue the Lifetime movie music.

Still, the FBI’s solidarity skit can’t hold a candle to Congress. The image of politicians wrapped in kente-cloth stoles kneeling in a room so ironically called Emancipation Hall is the kind of dramatic hypocrisy only DC can produce. As screenwriter Eric Haywood pointed out in a tweet on June 8th,

What if they, like, just passed some laws instead of dressing up like a Wakandan chess set?

Of course, none of this kneeling signals a change in policy. The Police Reform Bill is the legislative equivalent to wrapping yourself in a kente-cloth stole and calling it progress. The bill seeks to ban chokeholds, something many cities have announced their intention to do anyway, set up a national database of police misconduct, and set a standard for use-of-force. It would supposedly make it easier to pursue legal damages against brutal cops, but obviously this does nothing to prevent brutality in the first place. Furthermore, the Supreme Court on Monday struck down a request to review “qualified immunity” for brutal cops, leaving in place the strongest shield from the highest court in the land. Brutal cops have nothing to fear here. And while the bill includes language on racial profiling, neither the hyper-racist war on drugs nor the tactics used to round up black and brown bodies such as quick-knock raids are on the chopping block. It keeps in place the 1033 program, the military-to-police pipeline that has allowed local and even school police to look the part of an occupying force, not just act it. In a nutshell, this bill is about as spineless as the kneeling politicians. And that’s just the point. Real change means defanging the servants and protectors of the system those politicians represent. It’s a lot easier to just take a knee–or indeed, paint a street.

It’s no accident that DC Mayor Muriel Bowser commissioned “Black Lives Matter” to be painted on 16th Street NW leading up to the White House right after police, including some of her own DC MPD, violently attacked protestors. It’s a shoddy attempt at a cover-up job, one that neither local black organizers nor their allies are buying. As activist and journalist Jacquie Luqman wrote recently:

Muriel Bowser doesn’t even like the Black people in her own city. This means nothing. It does nothing for us. It doesn’t help us. It doesn’t improve schools. Doesn’t get rid of the spouse abusing fascist top cop she loves so much [Police Chief Newsham]. Doesn’t stop gentrification of poor Black neighborhoods. Doesn’t improve affordable housing. Doesn’t change any of the lack of progress she has made on any of those things. 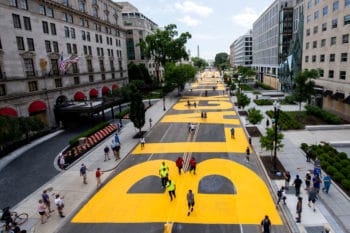 The Washington Monument and the White House are visible behind the words Black Lives Matter sign that has been painted in bright yellow letters on the 16th Street by city workers and activists, Friday, June 5, 2020, in Washington. (Khalid Naji-Allah/Executive Office of the Mayor via AP)

Not surprisingly, DC, the seat of empire, is but a microcosm of this over-policed, and unaccountable nation. For instance, Bowser loves to tout the fact that MPD officers wear body cams, but what good is a bodycam if you can’t see the footage? In 2018, MPD claimed that bodycam footage critical to a civil rights lawsuit had been erased. That same year, three black men were murdered by police over a 5-week span and Bowser has still not identified those officers or even told the public whether they are on duty or not. And last year, a member of a DC Advisory Neighborhood Commission requested bodycam footage from a stop and frisk incident only to be slapped with a $5,000 invoice. Transparency is quite the racket.

Fast forward to today and in the midst of calls to defund the police, DC’s newly proposed budget seeks a 3.3 percent increase in the MPD budget, totaling $578 million plus $5 million for a new DC jail. At the same time, funding for the Office of Neighborhood Safety and Engagement, a product of the hard-won NEAR Act which invests in community-led violence prevention efforts rather than police and incarceration, is slated to be cut by 11.4 percent.

In the face of these facts, painting letters on the street feels like a paltry response, at best. Still, this paltry performance is catching on. Residents of Flint, Michigan now have their own street emblazoned with “Black Lives Matter.” I’m sure this soothes the fact that they still don’t have clean drinking water, and that the people responsible for the death, pain and suffering of the predominantly black community members haven’t been brought to justice.

Erik Martínez Resly, a DC artist and organizer calls stunts like these “artwashing” and says that “here, art is being instrumentalized by the city to distract us from…actions that directly harm Black communities and protest.” He notes that while these three words are beautiful and powerful, and should indeed be plastered everywhere,

all of us have a responsibility to hold Mayor Bowser, and all elected officials, accountable to these three sacred words. 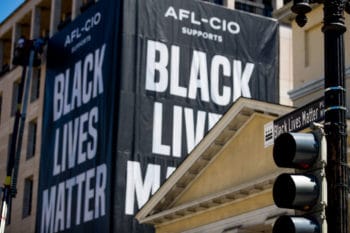 Incidentally, those three words have gotten a lot of play in some of the most unlikely places. Here in DC, Black Lives Matter posters and signs are everywhere–from the AFL-CIO and AFSCME buildings, homes to police unions, to chain stores like Starbucks. Hell, Starbucks even has its own t-shirt design “in support of the movement” after getting lambasted for not allowing baristas to wear their own. The likes of Netflix, Amazon, Air bnb and more have jumped on the bandwagon–proudly displaying those three words as if they alone could erase corporate malfeasance and the systemic racism which all big corporations feed off of in order to turn a profit.

Still, Resly is right in saying that those words should be everywhere–and the legitimate movements and actions that they do represent are already manifesting changes that just a few months ago seemed to be deadlocked and/or unthinkable. For example, a combination of city officials and handy protestors are removing a slew of confederate and colonial statues across the country. New York State repealed 50-A, legislation that shielded police misconduct records from the public. NYC Mayor de Blasio has said that he is “committed to cutting funding to the New York Police Department.” Los Angeles Mayor Eric Garcetti announced cuts to the LAPD budget following waves of protests that included actions outside his residence. Minneapolis City Council Members have begun a process that would allow for the abolition of the police department.

These are victories we should acknowledge and take pride in. At the same time, we must ready ourselves for the work still to come. If these shallow displays of solidarity, these vapid theatrics are evidence of anything, it is that the ruling class really wants us to step off the gas. They are so desperately hoping that their paltry offerings will appease us into thinking we’ve won. With the status quo still firmly in place, they want us to feel that real change has occurred–that the abuse wasn’t so bad, won’t be that bad again, honest, the system loves you! As Executive Director of Black Agenda Report, Glen Ford notes in a recent article,

…this is no time for a lull or a truce. Rather, it is time to sharpen our political instruments and deepen the mass movement’s social penetration.

We will not be appeased by graffiti, games of dress-up or more band-aid “flesh” colors. We will not applaud LA Unified School Police as they plan to return grenade launchers–yes, grenade launchers. Yes, school police. Rather, we will demand that there be no cops in schools anywhere and that the militarization of the police must end. We will draw connections between those two entities and in this fight to defund police carve a pathway to defunding the largest imperial military the world has ever seen. We will have the difficult discussions, ask the uncomfortable questions, and recognize steps such as demilitarization and defunding not as ultimate goals but as stepping stones towards the abolition of all oppressive institutions. We will continue to grasp and foresee the malleability of our capitalist state, the various disguises it will don in order to manipulate and deceive and above all, avoid change. We will make these promises to ourselves and our communities, follow black grassroots leadership and not mistake inane acts for real change. As a community organizer, Maurice Cook put it, “There is so much work to do, and Black Lives Matter too much to be used like this.” Here’s to the powerful work behind those three words.

Eleanor Goldfield is a creative activist, journalist, and poet. She is the founder and host of the show, “Act Out!,” which airs on Free Speech TV on Dish Network, DirecTV, ROKU, Amazon Fire and others. Her articles and her show cover people and topics which corporate media either censor or misrepresent. Her spoken word performances blend visual projections and politically charged poetry. Her latest book, “Paradigm Lost,” blends radical verse with art from 15 dissident artists. She also was the co-founder and singer of Rooftop Revolutionaries, a political rock band born from the fight against capitalism and all the evils that stem from it. Besides speaking and performing, she assists in local action organizing and activist training. She is currently based in Washington, D.C. Her website is ken.