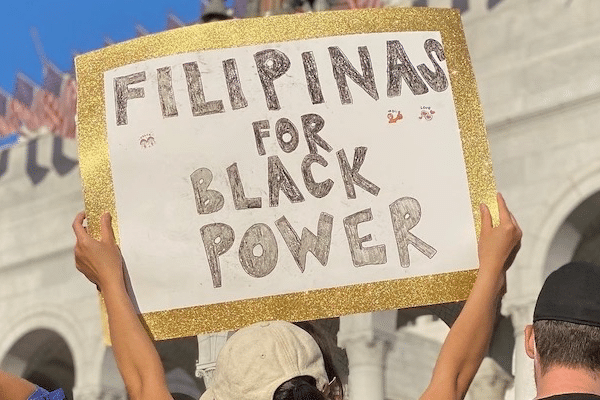 The horrific murders of George Floyd, Breonna Taylor, Ahmaud Arbery, Tony McDade and countless other unnamed and unrecorded murders at the hands of the police have galvanized mass uprisings across the U.S. and around the world under the banner call of Black Lives Matter. In a demonstration of solidarity across communities all around the world, people of color who have confronted

structural racism, disenfranchisement, and state violence have taken to the streets in these Black-led uprisings.

As first, second and even third generation Filipinos in the U.S., BAYAN USA has been actively participating and marching in solidarity with Black lives and Black self-determination. Our material basis for mobilizing our community for Black solidarity has always been for the simple reason that we share an enemy: U.S. empire (aka U.S. imperialism), and, by extension, its police and military as its tools to carry out fascism. We also share an important aspiration: liberation.

We understand that the historic oppression of Black people in the U.S., beginning with chattel slavery, created the conditions for the U.S. to accrue enough wealth from slave labor to become a global imperialist power. That power would eventually wage aggressive wars for territory overseas, beginning with the invasion and brutal colonization of the Philippines in 1899.

The national liberation struggle that Filipinos and our diaspora overseas have been waging since 1899 strikes at the same beast that the Black liberation struggle has been valiantly fighting against. The Black soldiers sent to the Philippines as part of the U.S. invasion who defected to the side of Filipino revolutionary forces fighting against U.S. occupation came to this realization at the turn of the 20th century. And in the same vein, we know that every step forward of the Black liberation struggle is a victory for the Filipino people and all peoples suffering under U.S. empire.

Hundreds of years later, in 2020, Black people in the U.S. are targeted by the police and criminal justice systems of the fascist and war-profiteering U.S. state. At the same time, the Philippines remains a neocolony of the U.S. and the Filipino people remain impoverished and repressed by a U.S.-puppet fascist Philippine dictatorship. From marching together after the murder of Amadou Diallo in 1999, to the mass uprisings in the wake of Mike Brown, Eric Garner, and Trayvon Martin’s deaths in 2014, we have made it a point to link and raise our struggles and demonstrate our paths to liberation as interconnected, as Chairman Fred Hampton implied. Our struggles are distinct, but advance forward ever in step against U.S. imperialism.

The global health pandemic and the unprecedented economic crisis that has ensued—a direct result of the U.S.’ militarist and neoliberal response to COVID-19–has laid bare the structural economic assault of the capitalist system on poor people everywhere. The role of police as a tool of the state and white supremacy as a ruling class ideology to protect said capitalist system have been exposed. The mass uprisings calling for justice for George Floyd and growing awareness of the failures of capitalism ring of a higher class consciousness the people of the U.S. sorely need.

Simply put, now is the time to break free from the neoliberal trap of identity politics that silos struggles that are materially and historically interconnected and works in favor of preserving the racist and capitalist status quo because it fails to name and address the root problem we are trying to resolve.

As part of the larger group collectively known as people of color in the U.S., we are concerned by the ideological influence of neoliberalism on young bright minds today, which surrenders the primacy of class consciousness and class struggle, and by extension proletarian internationalism as the material basis for international solidarity.[1]

Historically, Black leadership in the U.S. has drawn on proletarian internationalism and class struggle as peoples weapons for combating systemic racism and white supremacy.

In the final year of his life, Malcolm X spent time in Africa and the Middle East, where he built relationships with leaders of anti-colonial and anti-imperialist resistance movements. Prior to that, Malcolm X spoke of the need for internationalism when he drew inspiration from the Bandung Conference of 1955, uniting Black and Asian leaders in an international alliance that went beyond identifying white supremacy as the common enemy, but named colonialism and monopoly capitalism’s interest to control the natural resources and use their populations as cheap labor from the Global South.

At the same time, many leaders of Third World resistance movements expressed solidarity and connected the struggles of colonized peoples overseas with the oppression of Black people in the US, including Ho Chi Minh, Mao Tse-Tung and Fidel Castro, to name a few.

While speaking of non-violence in the 1960’s civil rights movement, it was Martin Luther King Jr.’s vocal criticisms against war and impoverishment (as forms of class warfare) that eventually made him a target for assassination by U.S. establishment.

In 1969 and 1970, the Black Panther Party sent African-American delegations to North Vietnam, North Korea, and China.

As the U.S. continued its military invasion of Vietnam in the 1970’s, the BPP and other Black leaders contributed an important message to the anti-war discourse in the U.S.–that of drawing material connections between the historic state violence against Black people in the U.S., including lynchings, to the U.S. wars of aggression for hegemony and geopolitical influence.

And in this period of mass uprising against racist police terror in the U.S. and around the world, the Trump administration simultaneously pursues arms deals with other countries, including the fascist and blood-thirsty Duterte regime in the Philippines, to beef up the trillion-dollar military-industrial complex. In the same breath, it militarizes the police and deploys National Guard to “dominate” protestors in the “battle zones,” all in the time of the biggest economic crisis the American people have ever confronted, with no clear path to economic recovery.

While fighting the imminent passage of Duterte’s Anti-Terrorism Bill in the Philippines, we as Filipinos in the U.S. draw material connections between the U.S.-backed counter-insurgency of Duterte with police brutality and all forms of state violence in the U.S. that target and destroy Black, Brown, immigrant, and all working class lives.

One where youth of all races and creeds embrace the demands of the international working class over so-called intersectionality. One that can actually rock and threaten the status quo by holding ruling classes accountable, and dismantling the economic foundation of white supremacy and the police state. One with a fighting chance of actually freeing us all.

Bernadette Ellorin is the National Spokesperson of BAYAN USA (Bagong Alyansang Makabayan), an anti-imperialist alliance of 30 grassroots Filipino organizations fighting for genuine sovereignty and democracy in the Philippines, as well as the rights and welfare of Filipinos in the U.S. and the diaspora.

Adrian Bonifacio is the National Chairperson of Anakbayan-USA, a grassroots Filipino organization of youth and students with 26 chapters across the country. It is the largest overseas chapter of Anakbayan Philippines, and a member of BAYAN USA.