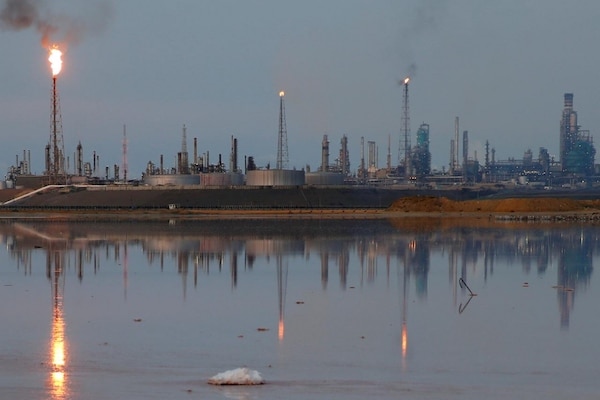 The Amuay refinery in Punto Fijo, western Venezuela. Amuay and Cardon form the Paraguana Refinery Complex, which is the third largest in the world. (Reuters/Carlos Garcia Rawlins)

Venezuela’s oil production has fallen for a third consecutive month under pressure from U.S. sanctions and contracted global demand.

The latest OPEC monthly report has the South American country’s May output at 570,000 barrels per day (bpd) according to secondary sources, down from 624,000 bpd in April. The figures reported directly by state oil company PDVSA reveal an even steeper fall, from 737,000 bpd in April to 573,000 bpd in May.

The industry was further hit with an oil embargo and a blanket ban on all dealings with the Venezuelan state in 2019. After falling for much of the year, production stabilized in the last quarter to bring the 2019 average to 796,000 bpd.

The U.S. Treasury Department levied new measures against Venezuela’s oil sector in 2020, imposing secondary sanctions against two Rosneft subsidiaries, which forced the energy giant to shutter its Venezuela operations and transfer its assets to a Russian state-owned holding company. The Russian energy giant had been carrying as much as 60 percent of Venezuela’s output before rerouting it to other destinations.

Most recently, Washington has taken aim at foreign shipping firms carrying Venezuelan crude in a bid to choke off Venezuela’s main source of hard currency earnings.

In response, the Union of Greek Shipowners met with the U.S. ambassador to the country this week, pledging to comply with the punitive sanctions regime.

S&P Global has reported that more sanctions are likely as the Trump administration has its scopes trained on some 50 more tankers that have either loaded from Venezuela or carried Venezuelan crude by way of ship-to-ship transfers.

The unilateral U.S. measures have caused Venezuelan oil exports to plummet by 28 percent in the first half of June, according to Reuters. Crude exports are reportedly on track to fall to their lowest level in 70 years.

U.S. sanctions and Rosneft’s departure have also exacerbated fuel shortages in the South American country. In response, the Maduro government turned to Iran, which sent five fuel tankers in defiance of U.S. threats. Tehran has vowed to continue supplying Caracas with gasoline.

Additionally, Iran has also collaborated with equipment and experts in repairing Venezuelan refineries. According to oil industry union sources, the Cardon refinery, part of the country’s largest refining complex, was reactivated last week and is currently processing 50,000 crude barrels a day out of a maximum 300,000 bpd capacity.

On Monday, Mexican President Andres Manuel Lopez Obrador announced that his government would be willing to sell gasoline to its Latin American neighbor.

“If [Venezuela] were to make the request and it were a humanitarian necessity, we would do it,” he said during a press conference.

Asked whether he would defy U.S. sanctions to send fuel, Lopez Obrador responded, “… Mexico is an independent, sovereign country and we don’t meddle in the affairs of other countries… No one has the right to oppress others, no hegemonic power can crush another country,” he declared.”

On Thursday, the Treasury Department slapped sanctions on Mexican companies Libre Abordo and Schlager Business for engaging in oil-for-food agreements with Venezuela.

The measures also targeted the owners of Libre Abordo and Schlager, Olga Zepeda and Veronica Esparza, and businessman Joaquin Leal, accused of having ties with Venezuelan government contractor Alex Saab, who was recently detained on a Washington-issued arrest warrant in Cape Verde. All three individuals are Mexican nationals.

Libre Abordo told Reuters that the “exchange of humanitarian aid with Venezuela should not be subject of sanctions” and that its lawyers would evaluate a response.