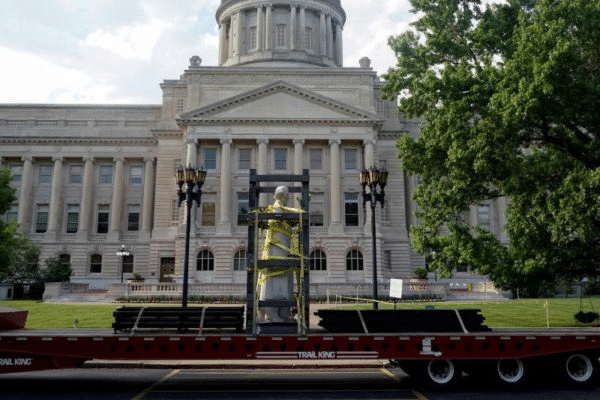 Why Just Statues? Why Not Topple the U.S. Constitution as Well?

Protesters are toppling slaveowner-statues from one end of the U.S. to the other. Given that slavery is nothing more than legalized kidnapping, the only surprise is that it’s taken them so long. No one would honor Jeffrey Epstein with a statue, so why honor generations of rapists and child molesters who came before him?

But there’s no point toppling slaveholders without toppling what slaveholders wrought, up to and including their greatest achievement of all–the U.S. Constitution. This is the document that not only governs life in the United States down to the tiniest legal detail, but, thanks to America’s global hegemony, undergirds the international system as well.

Yet the Constitution is a plan of government created by slaveholders for slaveholders in order to maintain their wealth and perpetuate their grip on power. Of the 55 delegates to the Philadelphia Constitutional Convention in 1787, twenty-five were slaveowners, which was more than enough to give them an effective veto over the proceedings as a whole. Slaveholders were economically predominant in six of the thirteen states–Maryland, Delaware, Virginia, North Carolina, South Carolina, and Georgia–which was more than sufficient to stop the constitutional process in its tracks since Article VII stipulated that nine had to approve the new constitution before it could become law.

So the rest had no choice but to go along. Not everyone in America supported slavery. To the contrary, Massachusetts and New Hampshire had already banned it by 1787 while Pennsylvania, Connecticut, and Rhode Island had passed gradual abolition laws that were putting it on the road to extinction. But slaveowners were influential in swing states like New York and New Jersey, while they were so rich and powerful in the south–George Washington was worth better than half a billion dollars in today’s money–that New England abolitionists had no choice but to go along.

As a result, Charles Cotesworth Pinckney, a member of the Philadelphia convention, was able to reassure his fellow South Carolina plantation owners that the new constitution would render the south’s “peculiar institution” impregnable. “In short,” he said,

considering all circumstances, we have made the best terms for the security of this species of property it was in our power to make. We would have made better if we could; but on the whole, I do not think them bad.

So strong was slavery’s position, in fact, that Abraham Lincoln conceded as late as 1861 that he had “no lawful right” to “interfere with the institution of slavery in the states where it exists.” In the end, the only way abolitionists were able to get around this legal blockade was by launching an extra-constitutional civil war, a brutal four-year slog through blood and mire that ended up costing the life of one American in fifty, a level of carnage relative to population that was double that of the French Revolution of 1789-94.

This was the “covenant with death and an agreement with hell” that the abolitionist William Lloyd Garrison denounced in 1854. As Albany Law School professor Paul Finkelman noted in a 2013 article, the Constitution included half a dozen or more provisions that rendered slavery untouchable. Article I guaranteed that the African slave trade would continue for more than twenty years–until 1808, to be exact. Article IV required northern states to return slaves trying to escape to freedom, while Articles I and IV contained separate clauses empowering Congress to put down slave rebellions. Article I prohibited taxes on slave-produced exports, while, in general, the document’s division of powers conceded vast areas of domestic policy, slavery first and foremost, to the states.

Three features were particularly important. One was a senate based on equal state representation. Since Congress controlled new states entering the Union, this allowed slave states to maintain a rough parity with the North that would allow them to veto any and all bills right up to the Civil War. A second was a notorious clause in Article I allowing southern states to count slaves as three-fifths of a person for purposes of congressional apportionment. The upshot was to give slave states as many as twenty-five extra seats in the House of Representatives, as well as up to twenty-five extra votes in the Electoral College. This is why Thomas Jefferson was able to triumph by eight electoral votes over John Adams of Massachusetts in the 1800 presidential race. It’s also why eleven of the fifteen presidents prior to Lincoln were slaveowners–because the South had stacked the deck. (Besides the two Adamses, John and John Quincy, the only exceptions were a couple of northern nonentities who were pro-slavery nonetheless–Franklin Pierce of New Hampshire and James Buchanan of Pennsylvania.)

The third major weapon in the slaveholders’ arsenal was Article V, which governs how the Constitution can be amended and which is so slanted to minority interests that it allows just over one-third of either house of Congress or one-fourth-plus of the states to veto any constitutional alteration, no matter how minor. So steep are the barriers to reform, Finkelman points out, that slavery conceivably be with U.S. still if Union forces hadn’t abolished it at gunpoint.

But what’s important in terms of today’s protesters is that while slavery may be gone, its legacy is not. Thanks to equal state representation, the Senate is even more lopsided than it was in the mid-nineteenth century and hardly less racist since blacks and Hispanics are disproportionately concentrated in the ten largest states that are outvoted four to one by the minority of Americans who live in the other forty. Article V still allows one-fourth-plus of the states – i.e. thirteen states representing as little as 4.4 percent of the population–to veto any constitutional reform. Since most of the small states tend to be lily-white bastions like Wyoming, the Dakotas, and Vermont, it’s not difficult to guess whose interests wind up being served.

Then there’s the three-fifths clause. To be sure, the Fourteenth Amendment, ratified three years after the Civil War, supposedly rendered it moot by declaring that congressional representation “shall be apportioned among the several states according to their respective numbers, counting the whole number of persons in each state.” But the after-effects linger on. If it wasn’t for the three-fifths clause, we wouldn’t have the Electoral College since its entire purpose was to augment the power of the slave states over the presidency. But if it wasn’t for the Electoral College, we wouldn’t have Donald Trump, who won in 2016 by 306 electoral votes to 232 despite trailing by better than two percent in the popular vote.

So contrary to an endlessly reactionary Democratic Party, it wasn’t Russia that put Trump, but a superannuated constitution that people like Nancy Pelosi and Chuck Schumer revere.

Finally, there’s the police. As Finkelman points out, southern states pushed for a constitutional arrangement that granted them maximum local autonomy. They wanted a monopoly on local power so they could deal with both runaway slaves and poor white farmers for whom slavery was economically devastating. But the upshot centuries later are myriads of local police departments–nearly 18,000 in all–answerable to no one other than local politicians who are every bit as benighted as they are. They have a license to kill as a consequence because that’s the way slaveholders wanted at the time, an arrangement that no one’s been able to do a thing about since because America’s untouchable eighteenth-century constitution means that it’s all but set in stone.

So go ahead–topple all those status of Jefferson Davis, Robert E. Lee, and other child-snatchers. But don’t forget to topple the plan of government they created. Slavery may be gone, but its ghost is with us still, which is why it’s time to exorcize it once and for all.

Daniel Lazare is an American freelance journalist, publicist and blogger.