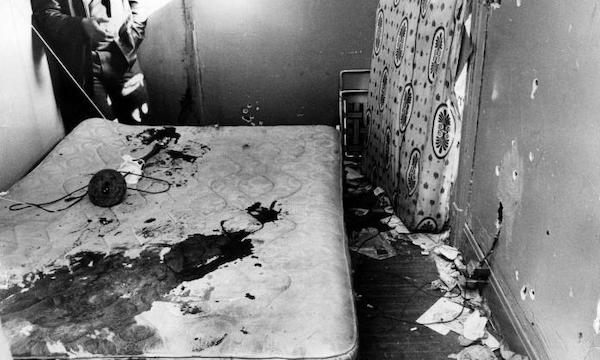 The bloody mattress at the scene of the assassination of Fred Hampton.

Twenty-one-year-old Black Panther Party deputy chair Fred Hampton and his comrade Mark Clark were assassinated in a 1969 pre-dawn raid in Chicago. Arguably the most talented and politically astute of the Panther leaders, Hampton was renowned for inspiring activists of all colours. But he was betrayed by William O’Neal, his bodyguard and the Panthers’ head of security, who was an FBI informant.

Hampton was a victim of the bureau’s Counter Intelligence Program (COINTELPRO). Between 1956 and 1971, the FBI carried out activities, many of them illegal, to infiltrate, disrupt and discredit a range of political organisation throughout the country. Following the assassinations of Malcolm X in 1965 and Martin Luther King Jr in 1968, the virulently anti-communist FBI director, J. Edgar Hoover, wrote of his fear of “the rise of a new Black Messiah”. He labelled the Black Panthers “the biggest threat to the security of the US” and ordered agents to employ “hard-hitting programs to destroy, disrupt, and neutralise” them.

The U.S. domestic intelligence services budget in 1969 was $7.4 billion. Of 295 operations against Black groups, 233 were aimed at the Panthers. In that year alone, 28 members were murdered by the FBI. Records show that even community organising efforts were deemed a threat. Hoover even directed COINTELPRO resources against the Panthers’ free breakfast program in poverty stricken Black neighbourhoods. A U.S. Senate select committee report on the FBI operations against the Panthers concluded that tactics “were clearly intended to foster violence, and many others could reasonably have been expected to cause violence”.

The Panthers were a radical outgrowth of the civil rights movement, formed initially as a Black self-defence group to protect communities from racist police brutality. Its armed members followed police and surrounded them when they hassled Blacks. They identified as revolutionary socialists and had a 10-point program of demands ranging from improved health care and education for Black communities to police and prison abolition. The group was formed in 1966, and at its height in 1970 had thousands of members in 68 cities. But by 1971, COINTELPRO had virtually wiped it out.

It wasn’t just by killing them. Many Panthers were sent to prison on spurious charges; some are still there after decades, often in solitary confinement. Documents obtained under the Freedom of Information Act report discussions between agents about how to create animosity among leading members of the group. Stanley Nelson’s documentary Panthers: Vanguard of the Revolution reveals how the FBI forged abusive letters and planted threatening messages and mocking cartoons to cause trouble between the Panthers and other Black nationalist groups and street gangs. People’s Law Office defense attorney Jeffrey Haas’ first-hand account of how the state conspired to murder Hampton and Clark gives an account of the role of O’Neal:

He never attended political education classes and pushed actions over thought and politics; he advocated the most militaristic line … O’Neal didn’t talk politics. He proposed actions, frequently armed ones. This conflicted with my image of an informant as the silent, observant type, following orders from his control to remain inconspicuous. Looking back, he was clearly a provocateur, but I hadn’t realized then that this could be a good cover for an informant.

While the Panthers were not the first, they were the most notorious targets of COINTELPRO. Other socialist and communist organisations, civil rights, anti-war, environmentalist and First Nations activists and groups were also attacked. King’s “I have a dream” speech won him the label of “the most dangerous Negro in the future of this Nation” in an FBI memo. King won the Nobel Peace Prize in 1964 and was then subject to a concerted campaign to discredit and destroy him. Most famously, the FBI sent him an anonymous letter, detailing his alleged marital infidelity and insinuating that he ought to commit suicide:

There is only one thing left for you to do. You know what it is.

At the height of the anti-Vietnam War movement, students at Ohio’s Kent State University protested Richard Nixon’s expansion of the war into Cambodia. In response, the National Guard stormed the campus and fired 67 rounds, killing four students and hospitalising nine. The event led to walkouts and protests by more than 4 million students at universities around the country. At one demonstration at the University of Alabama, a building was set on fire and the protests declared “unlawful assemblies”, resulting in the arrest of hundreds of activists. The man responsible for the fire, Charles Grimm Jr, was working as an FBI informant at the time.

The case of another informant, Tommy Tongyai (“Tommy the traveller”), was made famous by a 1971 documentary, The Revolutionary Was a Cop. Tongyai claimed that he was a member of Students for a Democratic Society–a radical anti-war organisation with almost 100,000 members. He showed students how to make Molotov cocktails, encouraged them to kidnap congressional representatives and convinced students at Hobart College in Geneva, New York, to firebomb a campus building, which they did and for which they were charged.

The Communist Party was an obvious FBI target at the height of the Cold War, but smaller socialist groups weren’t spared either. Thanks to a 1986 lawsuit filed by the Socialist Workers Party, a U.S. Trotskyist organisation with about 3,000 members, 10 million pages of evidence were released, exposing the FBI’s operations against the group. “The FBI had used 300 infiltrators and 1,300 informers over a 15-year period, and burglarized SWP offices and members’ homes more than 200 times”, Michael Steven Smith, writing in the Indypendant, a New York newspaper, noted last year. “Wiretaps had been employed for 20,000 days and listening devices for 12,000. Landlords were contacted in an effort to get people evicted and workplaces were visited in order to get people fired.” The federal agents orchestrated racist smear campaigns against Black members of the party when they ran for public office and forged letters filled with racial slurs and insults, supposedly written from white to Black party members.

Violence against the left by the political right was favoured by COINTELPRO. In San Diego, the FBI financed and armed members of an anti-communist vigilante group to create the Secret Army Organisation, which targeted anti-war activists. One of the group’s victims was Peter Bohmer, an economics teacher at San Diego State College. He was subject to a campaign of intimidation consisting of threatening phone calls, a firebombing outside his house and the publication of a special public bulletin with his address, phone number, license plate and the message:

For any of our readers who may care to look up this Red Scum, and say hello, here is some information that may help.

Another right-wing provocateur on the payroll of the FBI, Gary Thomas Rowe, helped plan and carry out a Ku Klux Klan attack on the Freedom Riders–anti-segregationist civil rights activists who travelled across the US. The FBI allowed him to attack the Freedom Riders’ bus for 15 minutes before they intervened, enough time for Klansmen to set it on fire with the people still in it. Four years later, Rowe was in the car with Klansmen when they shot and killed civil rights activist Viola Liuzzo outside Selma, Alabama. Most damning of all, Rowe was likely responsible for the bombing of the 16th Street Baptist Church in Birmingham that killed four African American girls. He was given immunity by the FBI and was never convicted of any crimes.

COINTELPRO was wrapped up in 1971. But there is little doubt that comparable operations continue to this day. The FBI is just one arm of the repressive apparatus of the U.S. state alongside city, county and state police, the CIA, the NSA, the National Guard and the military. When the system is under threat, the role of these institutions becomes clear. By 1970, the U.S. military in Vietnam was disintegrating in mutinies, and capitalist rule at home was rocked from all sides as the anti-war movement and radicalising civil rights activists took over university campuses and city streets. COINTELPRO was the Vietnam War coming home. U.S. imperialism abroad required the bloody restoration of domestic peace.

The current Minneapolis-born rebellion has spread to almost every U.S. city, inspired hundreds of thousands to fight and, predictably, provoked the full mobilisation of the U.S. state. Programs like COINTELPRO tell us a lot about how the ruling class has and will again respond to challenges to the system. Our enemies have not changed much, and neither have our tasks. The radicals of the 1960s were committed to a cause that resonates with more urgency today–the destruction of a system built on profit, exploitation and oppression. In one of his last speeches, Hampton gave some solid advice about what the struggle needs to look like: