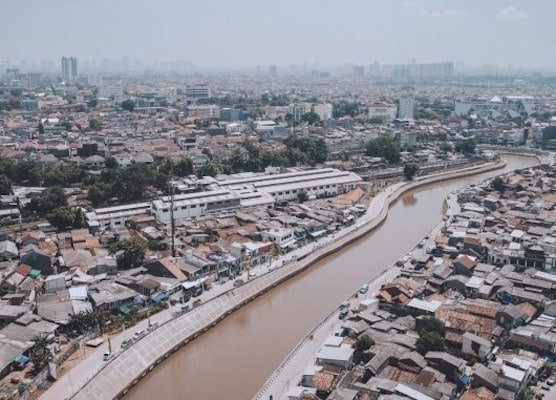 Cities across the world are facing a double-barreled existential problem: how to adapt to climate change and how to pay for it. Over the next thirty years, more than 570 coastal cities are poised to face frequent catastrophic flooding owing to sea level rise and more intense storms, while as many as 3.2 billion urban residents may run out of water by 2050. Other looming crises include soaring urban temperatures, the urgent need to transition away from fossil-fueled energy and transport systems, and plummeting rates of local biodiversity.

Responding to these problems will, international bodies project, require a virtually unprecedented buildout of infrastructure, from hardened municipal water and sewage systems, to urban afforestation, to renewable energy systems. This massive infrastructural program coincides with global economic conditions marked by the lingering ideological stranglehold of austerity, unprecedented levels of capital concentration, and now, myriad uncertainties produced by COVID-19. Cities across the world are facing a double-barreled existential problem: how to adapt to climate change and how to pay for it. Over the next thirty years, more than 570 coastal cities are poised to face frequent catastrophic flooding owing to sea level rise and more intense storms, while as many as 3.2 billion urban residents may run out of water by 2050. Other looming crises include soaring urban temperatures, the urgent need to transition away from fossil-fueled energy and transport systems, and plummeting rates of local biodiversity.

In response to the twin problems of resilient infrastructure needs and public fiscal constraints, the World Bank and an array of partner institutions from the Rockefeller Foundation to USAID have been ramping up programs to facilitate private investment in urban resilience. From a baseline of $10 billion across 77 cities in 2016, the World Bank aims to ‘catalyze’ investment of more than $500 billion into urban resilience projects across 500 cities by 2025.

But the vast majority of this money is not being distributed in the form of grants, as would befit a just adaptation regime respecting the loss and damage that will be borne by people least responsible for climate change. Nor is it ‘vanilla’ development lending, where states borrow from the World Bank for approved projects while receiving ‘capacity building’ for administering the project. Instead, this resilience funding is targeted at reformatting municipal governments to enable them to execute urban resilience projects through private-sector oriented pathways. These initiatives are focused on cultivating cities that can plan investor-friendly infrastructure projects, then access global debt markets to finance infrastructure that is meant to achieve resilience.

We call the process through which vulnerable cities of the Global South are being rendered investable in response to climate change Green Structural Adjustment.

We use the term Green Structural Adjustment to signal connections between 20th Century Structural Adjustment and contemporary World Bank urban-climate programming. Structural Adjustment formally ended in 2002, after the Bank, along with the International Monetary Fund, administered more than 500 Structural Adjustment Programs in almost 100 countries in the 1980s and 1990s. While the language of structural adjustment was phased out in favor of the more gentle sounding ‘development policy lending’ in 2004, the underlying faith in the power of markets to create desirable change, a commitment to technocracy, and mistrust in Southern states to pursue the ‘right’ objectives through the ‘right’ governance mechanisms, persists. But there are important twists from the 20th Century formula: the unit of policy intervention is the city, rather than the nation-state; the aim is to create access to debt, rather than fixing sovereign balance of payments crises and overwhelming debt; and, the primary objective is climate resilience to secure development, a departure, at least rhetorically, from environmentally calamitous Structural Adjustment.

While 20th Century Structural Adjustment Plans were often violently imposed- and successor policies administered by the IMF still are- the violence of Green Structural Adjustment is less direct. The Bank is the herald of investors, bearing the message that if city governments are not reformed in investment-friendly ways, those cities will continue to be cut off from more than $100 trillion swirling on global capital markets. This is a modern, environmentally-inflected version of TINA; as the World Bank sees it, “public investment alone, even when combined with [official development aid] is inadequate” to remake cities that can protect residents from environmental change; only financiers have the power to pay for resilient infrastructure at the scale necessary. So the criteria of investors, such as balanced municipal budgets, a regional or internationally recognized credit rating, and a pipeline of investable projects planned with accepted forms of environmental data must be achieved if cities are to gain access to these vast pools of capital.

It is precisely this concentrated wealth that Green Structural Adjustment aims to channel into urban resilience, in line with the broader World Bank project of ‘Maximizing Finance for Development’. Green Structural Adjustment offers a path to climate-proofed infrastructure provision operationalized in line with the ‘Wall Street Consensus’, an austerity-drenched logic of, and set of tools for, using public funds to subsidize private sector investments. In turn, these investments are to be channeled into familiar financial mechanisms, including public-private partnerships, municipal borrowing through labeled green bonds, or land-value capture, but using the World Bank balance sheet and expertise “in innovative ways to catalyze trillions”.

Our paper looks at examples from Can Tho (Vietnam), Jakarta, and Kampala, but these processes are playing out in cities in virtually every corner of the Global South. And the scope of these interventions is growing: if Bank spending gets close to the $25 billion per year it aims to leverage by 2025, Green Structural Adjustment-aligned investments would be one of the biggest lines of ‘climate finance’ in the world.

While Green Structural Adjustment operates at the interface of global institutions and the city, its practices have structural ramifications. Overaccumulated northern capital has been desperately seeking profitable investment in a high liquidity, low yield world. Green Structural Adjustment, through its technical assistance and derisking activities, aims to produce a pipeline of investable frontiers. As more cities gain access to debt markets and their needs for adaptation grow, Green Structural Adjustment offers a multi-sited spatial fix: physically fixing Northern capital in Southern infrastructure and staving off crises of overaccumulation, producing new geographies of accumulation and the ability to absorb the ravages of a changing climate.

Ultimately, we reject the reframing of ‘climate debts’ enabled by Green Structural Adjustment from a radical claim to righting past and ongoing injustices that produce uneven climate risks into a technocratic syntax that heaps financial debt onto vulnerable cities in the Global South. There is much scope for (geographical) political economists to envision other modes for producing future-ready infrastructure, and the institutions to facilitate those futures. The move toward normalizing discourses of global green Keynesianism are welcome, but insufficient. Instead, our next steps are to figure out how the highly concentrated finance that the Green Structural Adjustment mobilizes can be repurposed to facilitate the decommodification of climate resilience and mitigation.

Patrick Bigger is a Lecturer in Economic Geography in the Lancaster Environment Centre, Lancaster University, UK. His research spans an array of environmental, financial, and political entanglements across world regions, currently focused on infrastructure and adaptation. He tweets at @patrickmbigger.

Sophie Webber is a Lecturer in the School of Geosciences at the University of Sydney. Sophie is an economic geographer studying the political economies of climate change adaptation and resilience, with a focus on Southeast Asia and Pacific regions. She tweets at @sophierwebber.