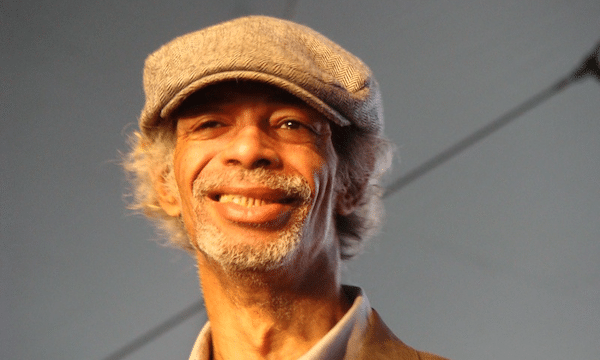 Consider the influence of television, even in the digital age. Consider the power that networks like Fox and CNN continue to wield over that nebulous thing called public opinion; the continued dominance of NBC and CBS. These giants don’t really inform so much as sell packaged ideological content paid for and approved by corporate sponsors. There’s really no need to update poet and musician Gil Scott-Heron’s radical, 1971 classic “The Revolution Will Not Be Televised,” unless we wanted to change the names. His voice still speaks directly to the moment we live in.

We exist on a continuum of conditions that have worsened since the late 1960s—despite promises and appearances to the contrary—until they have become intolerable. Scott-Heron wrote and sang about those conditions since his fiery 1970 debut. “Dubbed the ‘Godfather of Rap,’” notes Brooklyn Rail in a 2007 interview,

Scott-Heron has become a ubiquitous and practically de rigueur influence for everyone from hip hoppers and indie rockers to aging literati and dyed-in-the-wool academics.

One might think Scott-Heron’s classic spoken-word testament “The Revolution Will Not Be Televised” speaks for itself by now, but it still creates confusion in part because people still misconstrue the nature of the medium. Why can’t you sit at home and watch journalists cover protests and revolts on TV? If you think you’re seeing “the Revolution” instead of curated, maybe spurious, content designed to tell a story and gin up views, you’re fooling yourself.

But Scott-Heron also had something else in mind—you can’t see the revolution on TV because you can’t see it at all. As he says above in a 1990s interview:

The first change that takes place is in your mind. You have to change your mind before you change the way you live and the way you move. The thing that’s going to change people is something that nobody will ever be able to capture on film. It’s just something that you see and you’ll think, “Oh I’m on the wrong page,” or “I’m on I’m on the right page but the wrong note. And I’ve got to get in sync with everyone else to find out what’s happening in this country.”

If we realize we’re out of sync with what’s really happening, we cannot find out more on television. The information is where the battles are being fought, at street level, and in the mechanisms of the legal process. “I think that the Black Americans are the only real die-hard Americans here,” Scott-Heron goes on, “because we’re the only ones who’ve carried the process through the process…. We’re the ones who marched… we’re the ones who tried to go through the courts. Being born American didn’t seem to matter.” It still doesn’t, as we see in the killings of George Floyd and Breonna Taylor and so many before them, and in the grievous injuries and deaths from unconstitutional, military-grade police escalations nationwide since.

Scott-Heron asked us to question the narratives. “How do they know?” he sang in “There’s a War Going On” at Woodstock 94, above. How do the self-appointed guardians of information know what’s really going on? Television spreads ignorance and misinformation, as does radio and, of course, social media. This much we should know. But we’ve misinterpreted “The Revolution Will Not Be Televised” if we think it’s really about mass media, Scott-Heron always maintained. Before we can engage meaningfully with current events, a revolutionary change must happen from the inside out. No one’s broadcasting the truths we first, most need to hear.