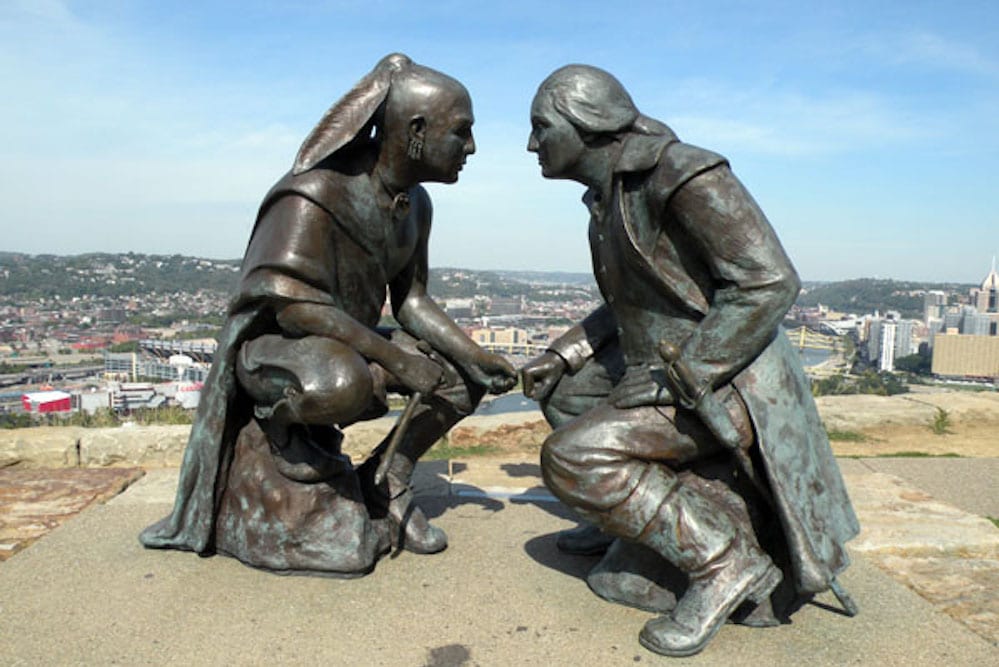 The “Point of View” sculpture by James A. West in Pittsburgh, Pennsylvania, depicts George Washington and the Seneca leader Guyasuta. In a letter written by tribal leaders in 1790, Washington is described as an unjust killer and referred to as the “Town Destroyer.”

In a recent statement on the removal of racist monuments presumptive Democratic presidential nominee Joe Biden rejected the inclusion of slave-owning past presidents like George Washington and Thomas Jefferson, as well as Christopher Columbus. (“Biden: Government must protect monuments to Washington, Jefferson,” The Hill, June 30, 2020; Eddy Rodriguez, “Biden Says We Should ‘Protect’ Columbus, Washington and Jefferson Statues,” Newsweek, June 30, 2020). Parroting former New Orleans Mayor Mitch Landrieu’s defense of Confederate statues in 2017, Biden contrasts the “remembrance of history to the reverence of it.” Confederate monuments representing reverence for secession and the maintenance of slavery belong in museums, not in public spaces. Yet we should remember figures like Washington who “had much broader views. They may have had things in their past that were now and then distasteful, but that’s a judgment.”

Of course, this view relies on forgetting, not remembering. In particular, we must ignore Washington’s genocide against the Iroquois Confederacy—for which he was given the infamous name, “Town Destroyer,” by Seneca chiefs in 1790. As a reminder, we republish below the final section of Chapter 2 from The Vulnerable Planet by John Bellamy Foster (Monthly Review Press, 1999). The section, “Soil and Civilization,” provides a brief history of the factors leading to westward colonial expansion, as well as the brutal details of how that expansion was completed. —Eds.

In the seventeenth and eighteenth centuries planters in Virginia and Maryland grew tobacco with slave labor. Virginia’s settlers had cleared some half million acres of forest by the end of the seventeenth century. According to historian Ralph Davis, this destruction was followed, within three or four years, by, “the draining away of much of the best soil; and tobacco-cropping very rapidly exhausted the land’s fertility. Every planter, therefore, tried to build up a large landholding with plenty of uncleared land in reserve, using the ample spare labour of the slack season each year to clear a piece of virgin land to which he moved some of his tobacco cultivation.”1

As a result, land prices soared and the area of cultivation spread rapidly westward, across Virginia and Maryland and into what were then outlying territories. The pressure of the colonists, and of land speculators (like George Washington and Benjamin Franklin), led to a major Indian rebellion (miscalled “Pontiac’s Conspiracy” by the British) in 1763—following the French defeat in the French and Indian war (1756-1763). At the instigation of the Delaware and Seneca, more than a dozen Indian nations resisted the colonial invasion, attacking British outposts throughout “Ohio country,” which stretched north-south from Lake Erie to the Ohio River and east-west from the Allegheny Mountains to western Ohio. In order to bring the fighting to an end, the British King issued the Proclamation of 1763, which said that no more European settlements could be established west of the Appalachians. This did little to halt land speculation, however. Thus plantation owner George Washington secretly employed a surveyor to locate more land to the west. He wrote to a friend that “I can never look upon that proclamation in any other light (but this I say between ourselves) than as a temporary expedient to quiet the minds of the Indians.…”2

The expansion westward led to further conflict with the Indians. The most important and extensive political unit among the Indians north of the Aztec Empire was the Iroquois Confederacy, which was based in upstate New York and western Pennsylvania but extended into the Ohio country. The Confederacy included six Indian nations that were bound together by a common Iroquois language—the Mohawk, Onondaga, Seneca, Oneida, Cayuga, and (after they were driven out of North Carolina as a result of attacks by colonial armies in the early eighteenth century) the Tuscaroras. The Iroquois held their land in common, hunted in common, and had houses (shared by several families) that were considered common property. In the 1650s a French Jesuit priest observed: “No poorhouses are needed among them, because they are neither mendicants nor paupers.… Their kindness, humanity and courtesy not only makes them liberal with what they have, but causes them to possess hardly anything except in common.”3

The territory dominated by the Iroquois (particularly the Ohio country) was the core of a region coveted by both the French and the British, and the Iroquois Confederacy became adept at playing the two colonial powers off against each other—until the French were forced out of North America by the British in 1763. With the disappearance of the French from the North American scene, the fate of the Indians, who could no longer play off one colonial power against another, was sealed. In the Revolutionary War of 1776, the Iroquois were divided, with some nations supporting the British and some the colonists. In retaliation for Iroquois attacks, General Washington, who later referred to the Indians as “beasts of prey,” ordered a campaign of total destruction.4 On May 31, 1779, he commanded General Sullivan:

The expedition that you are appointed to command is to be directed against the hostile tribes of the six nations of Indians… The immediate objects are the total destruction and devastation of their settlements and the capture of as many prisoners of every age and sex as possible. It will be essential to ruin their crops now on the ground, and prevent their planting more.… [P]arties should be detached to lay waste all the settlements around, with instructions to do it in the most effectual manner, that the country may not be merely overrun but destroyed.5 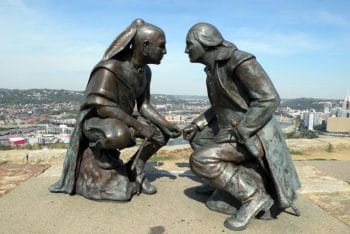 The “Point of View” sculpture by James A. West in Pittsburgh, Pennsylvania, depicts George Washington and the Seneca leader Guyasuta. In a letter written by tribal leaders in 1790, Washington is described as an unjust killer and referred to as the “Town Destroyer.”

Crops such as corn, beans, potatoes, pumpkins, squash, cucumbers, and melons grew in an abundance that astonished the invading soldiers. Some of the corn stalks were sixteen feet high and the ears as much as twenty-two inches long. There were also apple, peach, and cherry orchards. The orchard in one town contained 1,500 fruit trees. None of this was left intact. Forty towns and scattered settlements containing large houses were burned. In his report Sullivan declared, “We have not left a single settlement or field of corn in the country of the Five Nations [sic], or is there even the appearance of an Indian on this side of the Niagara.” Before the Revolutionary War most of the population of the Six Nations lived in thirty thriving towns scattered from the Mohawk River to Lake Erie in the Ohio country. By the spring of 1780, only two of these towns were undamaged by the war; the others were empty ruins or lay in ashes. The population was cold and hungry, suffering from scurvy and dysentery. Washington’s role in this destruction was not forgotten by the Iroquois. In 1792 the Seneca Chief Cornplanter addressed President Washington as follows: “When your army entered the country of the Six Nations, we called you the Town Destroyer; and to this day, when that name is heard, our women look behind them and turn pale, and our children cling close to the necks of their mothers.”6

The Iroquois fought back, but when the British were defeated in 1783 they found themselves treated as conquered subjects by the new Americans. According to historian Anthony Wallace, “Land speculators… saw the possibility of vast profits to be made from the sale, to thousands of individual settlers and entrepreneurs, of virgin timber and agricultural land, of waterways, mill sites, trading locations, harbors, towns sites, and so on.” Within thirteen years the Iroquois had been deprived of nearly all of their land and forced onto a few small reserves.7

In New England, declining soil fertility had created a hunger for Iroquois land. In Concord, New Hampshire, grain yields had fallen from 13.2 bushels per acre in 1749 to 12.2 bushels in 1771, while meadow hay yields fell from 0.82 to 0.71 tons per acre. In 1749 it took 1.4 acres of pasture to support a cow; by 1791 it took 4.1 acres. Colonial agriculture, with its reliance on a single crop, was vastly inferior to Indian agriculture, in which the practice was to plant corn, beans, and squash together, the corn stalks acting as bean poles and shading vegetables below. Monoculture not only meant lower yields per acre but also depleted the soil. As the Indians were pushed off their lands in upstate New York, Massachusetts farm families flooded westward. The expansion of the land base available to European settlers, as Carolyn Merchant has argued, was one of the crucial factors in the “ecological revolution” that took place in New England and New York at the end of the eighteenth century—the shift from coastal mercantilism and subsistence farming to capitalist agriculture and industry. The former had relied primarily on “extensive” methods of increasing production; the latter substituted “intensive” techniques of soil and crop management, while at the same time increasing the overall demand for land.8 The forcible removal of the original inhabitants—in this case the Iroquois—was therefore a form of “primitive accumulation” that set the stage for the development of a wider, more intensive capitalist economy.