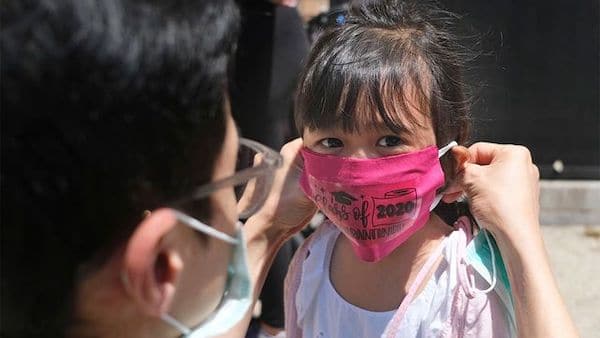 A father helps his child with a mask in front of Bradford School in Jersey City, New Jersey on June 10, 2020 (AP Photo/Seth Wenig, File)

Last Friday, the United States set a single-day record for new COVID-19 cases at 71,787. On Sunday, Florida set a one-day record for any state with 15,300 cases. Daily reported cases are climbing in 46 states, and the number of daily deaths is again on the rise, with nearly 1,000 each day over the past week.

This catastrophe is the outcome of the campaign led by the Trump administration but supported by the entire political establishment to force workers back into factories and workplaces without any serious effort to contain the pandemic.

The drive to reopen the schools in the fall, under conditions of the explosive spread of COVID-19, is a key element of a conscious, bipartisan policy of class war, in which lives are sacrificed for the sake of corporate profits.

The American ruling class is indifferent to human life. It is prepared to sacrifice the lives of countless students and teachers to facilitate its homicidal back-to-work policy, which requires that children be herded into unsafe schools so their parents can generate corporate profits in unsafe factories.

In this context, the New York Times, which speaks for the Democratic Party and the sections of the financial oligarchy allied with the Democrats, joined hands with Donald Trump in pushing the reopening of the schools in an editorial published over the weekend titled “Reopening Schools Will Be a Huge Undertaking. It Must Be Done.”

In March, the Times’ leading columnist Thomas Friedman coined the phrase used by Trump to justify reopening the economy, “The cure can’t be worse than the disease.” Now the newspaper is stepping up its efforts to provide legitimacy for the ruling elite’s class war policies.

The editorial begins by stating,

American children need public schools to reopen in the fall… They need food and friendships; books and basketball courts; time away from family and a safe place to spend it.

This is sophistry. What is the absence of “time away from family” compared with the trauma of losing a parent, grandparent or teacher to the pandemic? The Times does not care about what children need. It cares only about what Wall Street needs. And Wall Street needs kids in school so their parents can slave away for the likes of Jeff Bezos and Elon Musk.

The newspaper hints at this, writing: “Parents need public schools, too. They need help raising their children, and they need to work.” Further on, it notes,

As for the schools providing a “safe” haven from the pandemic, the claim that the dilapidated, underfunded and generally filthy schools in America are safe for children or educators is a criminal lie.

A report last month by the Government Accountability Office found that 41 percent of school districts need to update or replace the heating, ventilation and air conditioning systems in at least half of their schools. A 2016 report by the Center for Green Schools found that 15,000 schools in the country have poor indoor air quality deemed unfit for students and staff to breathe.

Under conditions where the World Health Organization has concluded that the coronavirus is airborne, and nearly a third of educators are at higher risk of dying from the virus, the mass reopening of schools threatens the lives of tens of thousands of educators as well as students. On June 26, Kimberley Chavez Lopez Byrd, 61, died after she and two other Arizona teachers contracted COVID-19 while sharing a room in summer school.

In an internal document leaked to the press on Friday, the Centers for Disease Control and Prevention (CDC) warned that fully reopening K-12 schools and universities would create the “highest risk” for the spread of the coronavirus.

The Times echoes the hypocritical statements of Trump and his far-right billionaire Secretary of Education Betsy DeVos bemoaning the harm to children caused by their absence from the classroom. Who do they think they are kidding? Administration after administration, Democratic and Republican alike, backed by the Times and the rest of the corporate media, has laid siege to public education, slashing funding, closing schools, laying off teachers and promoting for-profit charter schools.

The Times focuses its proposal for reopening the schools on acquiring “more money and more space,” suggesting that Trump “could work to get money to schools.” The bankruptcy of this proposal was underscored Sunday when DeVos stated on the “Fox News Sunday” program, “If schools aren’t going to reopen… they shouldn’t get the funds.” Instead, she said, federal funds should be used for school vouchers to pay tuition at private schools.

To acquire more space, the newspaper proposes the “repurposing” of “gyms and cafeterias,” holding classes “in the open air” or “under tents with no walls,” and even “closing streets around schools and holding classes there.” One’s jaw drops in the face of such reactionary rubbish. What the Times is talking about has nothing to do with real education. It is rather a “modest proposal” for shunting children into deadly holding pens in the interests of corporate profit.

All over the world, the pandemic has exposed the irreconcilably opposed interests that separate the capitalist class from the working class. No humane or rational solution to the pandemic is possible outside of a direct assault on capitalist property and political power.

In response to the homicidal policies of the ruling class, opposition is building among educators, parents and the broader working class internationally. The hashtag #14DaysNoNewCases has been trending on Twitter, with parents and educators denouncing the unsafe reopening of the schools. Facebook groups have been formed to oppose the reopening of the schools from Britain to South Africa. “Texas Teachers United Against Reopening Schools” has nearly 6,000 members.

Over the weekend, striking nurses in Joliet, Illinois rejected a sellout contract negotiated by the Illinois Nurses Association (INA). Autoworkers across the Midwest are forming rank-and-file safety committees in the plants, in defiance of management and the thoroughly corrupt United Auto Workers (UAW). Strikes and protests have taken place internationally in opposition to unsafe working conditions.

The trade unions that claim to represent teachers and educators, including the American Federation of Teachers (AFT) and National Education Association (NEA) in the U.S., have signaled their agreement with the campaign to reopen the schools, expressing only minor tactical differences while claiming that electing Joe Biden will solve everything.

The Socialist Equality Party calls upon educators to break with the NEA and AFT, and their state and local affiliates, and form independent rank-and-file safety committees in every school and neighborhood to mobilize against the unsafe reopening of the schools. Such committees must fight to unite educators with the broader working class.

Preparations must be made for a nationwide strike of teachers and school workers to block the unsafe reopening and demand a crash program to rebuild the schools and hire the necessary staff to provide high quality, safe and equal education for all. No teacher or school should be penalized for refusing to work under unsafe conditions. There must be no loss of income as long as the pandemic continues.

A nationwide strike of educators would have a profound impact on the development of the class struggle and would draw in wide layers of the working class, including autoworkers, logistics workers, health care workers and all those told to sacrifice their lives at the altar of private profit.

As seen in the global wave of protests following the police murder of George Floyd, the development of a nationwide strike in the U.S. would send shock waves throughout the world.

As the World Socialist Web Site has noted, the pandemic is not only a public health crisis. It has triggered a social and political crisis of vast dimensions. The ruling class, having worked out its strategic response to the pandemic in February and March, has carried out an unrelenting assault on workers ever since. The working class must respond with equal determination and ruthlessness. It must fight for the socialist overturn of the capitalist system, which threatens the lives of millions of workers and youth around the world.