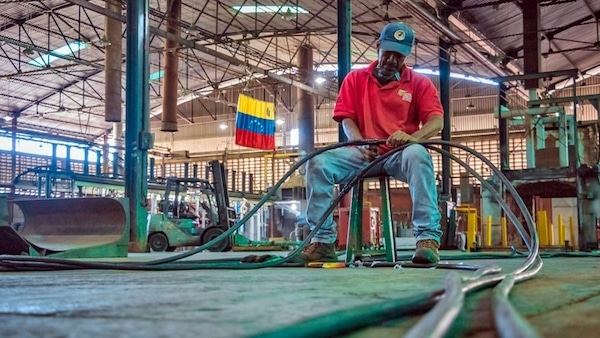 A member of the Productive Workers’ Army in the midst of a recuperation operative. (EPO)

The Productive Workers’ Army (EPO) is a grassroots movement composed of Venezuelan workers which came together in 2014. They dedicate their volunteer labour to rescuing various companies which have been paralysed because of the economic situation which the country is going through, the shortages of spare parts and supplies due to the U.S. blockade, and the various kinds of political destabilisation.

When the EPO is contacted by workers from the company in trouble, those best placed — according to the sector to be treated and the geographical location of the company — visit the entity to “diagnose the critical productive knots.”

This report is carried out by interviewing both managers and the working class “on a par with EPO’s diagnosis itself,” notes Sergio Requena, a member of the movement.

“Workers who have consciously decided to belong to the Productive Workers’ Army (EPO) have a very high technical level and own tools for the operational recovery of paralysed or semi-paralysed entities,” he explains.

After clarifying the state of the firm, and reaching an agreement between the parties involved, the EPO experts get to work to start the so-called Productive Workers’ Battles, which last from five to seven days depending on the production process and the company in question.

So far, 14 large companies have been reactivated this way, including flour plants, packaging plants and gas companies. One of the most epic ‘battles’ was at the Amuay Refining Complex [in September 2018] in Paraguana (Falcon State).

According to Requena, if funds are required to revive the company, “that investment must come from the troubled entity.” However, in many cases the solution comes when complementarity between state-run companies is achieved, as “what one is missing can often be provided by someone else.” 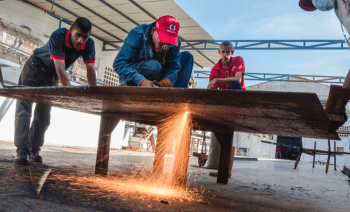 Members of the EPO in a Productive Workers’ Battle (EPO)

“In Venezuela we have a system of non-integrated working state entities, in which everyone makes their supply purchases separately, and in the long run this has led us to paralysed companies due to a lack of communication,” says Requena.

In this situation, what the EPO does is to invite workers from companies close by “to try to break the isolation and carry out exchanges that bring mutual benefits and development for all”.

Requena also recognises that in many cases, companies are unproductive due to poor management decisions, with managers “only seeking individual solutions through requesting extraordinary funding,” which has generated a large park of paralysed machinery “due to bureaucratic formalities or small things like a burnt fuse.”

Requena considers that many of these delays [in reactivating the productive apparatus] only hide the existence of economic interests, with “commissions” [for supply purchases] at stake.

However, Julia Puello, another member of the movement, says that the EPO initiative has demonstrated that the working class is able to modify the structure of the state, including these irregularities. “We workers can coordinate to bring about real change,” she convincingly says.

Puello, 67, recalls that at the beginning of her work with the EPO, many workers from paralysed companies were wary of the EPO’s intervention. “They thought we were going to take away their jobs, their spaces,” she says. But after overcoming the initial resentment, they decided to join in with the recuperation of the company.

“We also work together on intellectual training and even emotions as transversal axes,” she says.

A vision for the future

At the moment, the EPO is developing contacts with different organisations, companies and communes to prepare for upcoming “battles.”

“Where there are moral reserves, a sense of outrage and a willingness to act, the EPO will be there to bring about the operational recovery of these entities so that they can meet the needs of the Venezuelan people,” Requena says. 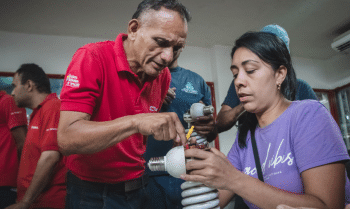 Members of the army and workers at the factory repair light bulbs. (EPO)

For this reason, the movement has proposed that the government create a great social mission called Sovereign Maintenance, which should be led by workers from popular organisations, missions, communal councils, communes and other popular structures. However, this proposal is yet to receive any official answer.

“We made the proposal in June 2019, raised it publicly and had it sent to the government by several members of the cabinet, but so far we have had no answer. But, yes. We want this project to be expanded and we will continue to fight,” explains Requena.

According to its members, the EPO opposes any economic policy that seeks a predominant role for private or foreign capital, as they trust that the working class “has the capacity to recover production to sustain the socialist horizon in Venezuela.”

“If we all feel part of this, if we take on our role as the working class or whatever name we assign ourselves, but always as members of a collective, we can contribute a lot in the oil, food, health and tourism industry,” says Puello, who regrets that so few have heard about the labour of an army that wields willpower instead of arms.

Translation by Paul Dobson for Venezuelanalysis